Chonburi Football Club (Thai: สโมสรฟุตบอลชลบุรี) is a Thai professional football club based in the city of Chonburi, Chonburi Province and currently playing in the top division in Thai football, the Thai League. The team lifted the league title in 2007 which became the most successful season in their history.[1]

Chonburi were founded in 1997 and their rivalries are Pattaya United and Sriracha which also based in Chonburi Province.[2] The team is widely known by their nickname The Sharks which can be seen in the club logo.

In 2006 they were invited to play in the Singapore Cup and reached the final, defeating local sides Home United, Albirex Niigata Singapore and Balestier Khalsa along the way. In the final they lost to Tampines Rovers 2–3 in the extra time after leading 2–0.

In 2007 they were again invited to participate in the Singapore Cup, but were defeated in the first round against Balestier Khalsa, in a replay of the previous season's semi-finals. Chonburi lost 3–2 in normal play. They have formed links with Manchester City.

In July 2008 they made another important big step into the future. In addition, the previous sponsor, Hemaraj Land and Development PLC signed a major sponsorship deal which comes into force from 2009. The contract will run for three years and will amount to the sum of 18 million baht (about 350,000 Euros). This may indeed be the largest completed sponsorship of a Thai football club which was ever completed.[3]

At the end of the 2008 season, there was only enough for runner-up. The main reason for this was certainly the profligacy. With two games left in the season you still on the first place in the table, but a 0–0 draw against Samut Songkhram made to naught in the penultimate round of the dream title defense. Jadet Meelarp was dismissed. His successor is officially announced in mid-December 2008. Kiatisuk Senamuang, known as Zico, was appointed coach of Chonburi. 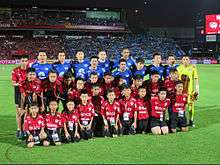 As Vice Champion 2008 is qualified for the 2009 AFC Cup and was drawn in a group with Hanoi ACB (Vietnam), Eastern AA (Hong Kong) and Kedah FA (Malaysia). Chonburi has to call to mind the Zeil set to be first in the group and win the AFC Cup in Thailand. The group stage was confident survived with only one defeat in six games. In the second round Chonburi PSMS Medan in Indonesia defeated 4–1 before retired in the quarter-finals against the Vietnam representative Bình Dương 2–4. The game against Medan was also the last game of Surat Sukha, who moved to Melbourne Victory.

In July 2009. End of the 2009 season the club was only the runner-up again. At the end of 2008 they had 2 points behind the champions, 2009, there were 3 points. Kiatisuk Senamuang changed at the end of the season to Hoàng Anh Gia Lai, the association in Vietnam where he was active as a player last. His successor in Chonburi was Jadet Meelarp, which had been released a year earlier. At his side, his former boss Witthaya Hloagune was provided as technical director of the club. Unlike other top clubs in the league but vorzuweisen Chonburi had hardly known commitments for the 2010 season. Only Therdsak Chaiman you can probably fit into this category. The 36-year-old was last in the Thailand national football team his comeback from Singapore and moved to Chonburi. Although the club was again runner-up, but this is not automatically eligible in the 2009 season to participate in the 2010 AFC Cup. Instead, the Cup Winners' Cup in Thailand directly qualified for the competition. Already in the second round of the Thai FA Cup retired from the Chonburi.

In 2008, in the first AFC Champions League, Chonburi played against the Japanese champions Gamba Osaka. On 20 March 2008 the club achieved its first victory in the AFC Champions League against Melbourne Victory.[4] The game was clouded by controversy when Melbourne Victory scored their only goal whilst a Chonburi FC player was down injured and his teammates were calling for the ball to be played off the park. It mattered little when Cameroonian striker Baga scored a goal from 35 yards out and then followed it up with a second goal in extra time to condemn the Melbourne Victory to their first loss in the competition 3–1.[5]

At the start of the 2008 season, Chonburi used the Chonburi Municipality Stadium plays in the 5,000-seater in Chonburi. Due to disagreements with the local authorities, the club wore its home games from 2008 of the Assumption School in Sri Racha Stadium. For the games of the 2008 AFC Champions League you had to dodge into the National Stadium (Thailand), which was also used for matches in the 2009 AFC Cup Bangkok. For the 2010 season, the club will return to Chonburi and will host its home games at the renovated Chonburi Sports College Stadium.[6]

In 2010 season they moved to IPE Chonburi Stadium.

In 2012 season they move to Chonburi Municipality Stadium after update stadium for played in the AFC Cup, and Thai Premier League

For the future, a new stadium is designed with modern training facilities. The new stadium will have 15,000 spectators and meet modern demands.[7] It would be next to the new buildings in Pattaya and one of the most modern stadiums in Si Racha in Chonburi province. Arise should the stadium with club grounds near Bang Saen on a ten-rai area. This is about 1.5 hectares. The site was donated by the President of the Association Wittaya Khunpluem.

As of 4 November 2016[11] Note: Flags indicate national team as defined under FIFA eligibility rules. Players may hold more than one non-FIFA nationality.