The Columbian Exchange was the widespread transfer of animals, plants, culture, human populations, technology, and ideas between the Americas and the Old World in the 15th and 16th centuries, related to European colonization and trade after Christopher Columbus's 1492 voyage.[1] Invasive species of flora and fauna and communicable diseases were a byproduct of the Exchange.

The contact between the two areas circulated a wide variety of new crops and livestock, which supported increases in population in both hemispheres, although diseases initially caused precipitous declines in the numbers of indigenous peoples of the Americas. Traders returned to Europe with maize, potatoes, and tomatoes, which became very important crops in Europe by the 18th century.

The term was first used in 1972 by American historian Alfred W. Crosby in his environmental history book The Columbian Exchange.[2] It was rapidly adopted by other historians and journalists and has become widely known.

In 1972 Alfred W. Crosby, an American historian at the University of Texas at Austin, published The Columbian Exchange.[2] This book covers the environmental impact of Columbus' landing in the new world.[3] The term has become popular among historians and journalists, such as Charles C. Mann, whose book 1493 expands and updates Crosby's original research.[4] 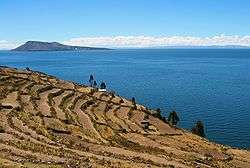 Inca-era terraces on Taquile are used to grow traditional Andean staples such as quinoa and potatoes, alongside wheat, a European introduction. 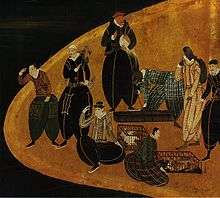 Before AD 1500, potatoes were not grown outside of South America. By the 1840s, Ireland was so dependent on the potato that the proximate cause of the Great Famine was a potato disease.[5] Potatoes eventually became an important staple of the diet in much of Europe. Many European rulers, including Frederick the Great of Prussia and Catherine the Great of Russia, encouraged the cultivation of the potato.[6] Maize and manioc, introduced by the Portuguese from South America in the 16th century,[7] have replaced sorghum and millet as Africa's most important food crops.[8] 16th-century Spanish colonizers introduced new staple crops to Asia from the Americas, including maize and sweet potatoes, and thereby contributed to population growth in Asia.[9]

Tomatoes, which came to Europe from the New World via Spain, were initially prized in Italy mainly for their ornamental value (see below). From the 19th century tomato sauces became typical of Neapolitan cooking and, ultimately, Italian food in general.[10] Coffee (introduced in the Americas circa 1720) from Africa and the Middle East and sugar cane (introduced from South Asia) from the Spanish West Indies became the main export commodity crops of extensive Latin American plantations. Introduced to India by the Portuguese, chili and potatoes from South America have become an integral part of Indian cuisine.[11]

Before the Columbian Exchange, there were no oranges in Florida, no bananas in Ecuador, no paprika in Hungary, no potatoes in Ireland, no coffee in Colombia, no pineapples in Hawaii, no rubber trees in Africa, no chili peppers in Thailand, no tomatoes in Italy, and no chocolate in Switzerland.

Initially, at least, the Columbian exchange of animals largely went through one route, from Europe to the New World, as the Eurasian regions had domesticated many more animals. Horses, donkeys, mules, pigs, cattle, sheep, goats, chickens, large dogs, cats and bees were rapidly adopted by native peoples for transport, food, and other uses.[12] One of the first European exports to the Americas, the horse, changed the lives of many Native American tribes in the mountains. They shifted to a nomadic lifestyle, as opposed to agriculture, based on hunting bison on horseback and moved down to the Great Plains. The existing Plains tribes expanded their territories with horses, and the animals were considered so valuable that horse herds became a measure of wealth.[13]

Still, the effects of the introduction of European livestock on the environments and peoples of the New World were far from positive. In the Caribbean, the proliferation of European animals had large effects on native fauna and undergrowth and damaged conucos, plots managed by indigenous peoples for subsistence.[14]

Further information: Influx of disease in the Caribbean

European exploration of tropical areas was aided by the New World discovery of quinine, the first effective treatment for malaria. Europeans suffered from this disease, but some indigenous populations had developed at least partial resistance to it. In Africa, resistance to malaria has been associated with other genetic changes among sub-Saharan Africans and their descendants, which can cause sickle cell anemia.[1]:164

Before regular communication had been established between the two hemispheres, the varieties of domesticated animals and infectious diseases that jumped to humans, such as smallpox, were strikingly more numerous in the Old World than in the New. Many had migrated west across Eurasia with animals or people, or were brought by traders from Asia, so diseases of two continents were suffered by all occupants. While Europeans and Asians were affected by the Eurasian diseases, their endemic status in those continents over centuries resulted in many people gaining acquired immunity.

By contrast, "Old World" diseases had a devastating effect when introduced to Native American populations via European carriers, as the people in the Americas had no natural immunity to the new diseases. Measles caused many deaths. The smallpox epidemics are believed to have caused the largest death tolls among Native Americans, surpassing any wars[15] and far exceeding the comparative loss of life in Europe due to the Black Death.[1]:164 It is estimated that upwards of 80–95 percent of the Native American population died in these epidemics within the first 100–150 years following 1492. Many regions in the Americas lost 100%.[1]:165 The beginning of demographic collapse on the North American continent has typically been attributed to the spread of a well-documented smallpox epidemic from Hispaniola in December 1518.[14] At that point in time, approximately only 10,000 indigenous people were still alive in Hispaniola.[14]

Similarly, yellow fever is thought to have been brought to the Americas from Africa via the Atlantic slave trade. Because it was endemic in Africa, many people there had acquired immunity. Europeans suffered higher rates of death than did African-descended persons when exposed to yellow fever in Africa and the Americas, where numerous epidemics swept the colonies beginning in the 17th century and continuing into the late 19th century. The disease was particularly impactful in the Caribbean during the heyday of slave-based sugar plantation.[14] The replacement of native forests by sugar plantations and factories facilitated its spread in the tropical area by reducing the number of potential natural predators.[14] Yet, the means of the transmission was unknown until 1881, when Carlos Finlay suggested that the disease was transmitted through mosquitoes, now known to be female mosquitoes of the species Aedes aegypti.[14]

The history of syphilis has been well-studied, but the exact origin of the disease is unknown and remains a subject of debate.[16] There are two primary hypotheses: one proposes that syphilis was carried to Europe from the Americas by the crew of Christopher Columbus in the early 1490s, while the other proposes that syphilis previously existed in Europe but went unrecognized.[17] These are referred to as the "Columbian" and "pre-Columbian" hypotheses.[17] The first written descriptions of the disease in the Old World came in 1493.[18] The first large outbreak of syphilis in Europe occurred in 1494/1495 in Naples, Italy, among the army of Charles VIII, during their invasion of Naples.[17][19][20][21]

Tomatoes in the Old World

It took three centuries after their introduction in Europe for tomatoes to become widely accepted. Of all the New World plants introduced to Italy, only the potato took as long as the tomato to gain acceptance. In large part this was due to 16th-century physicians believing that this native Mexican fruit was poisonous and the generator of "melancholic humours." In 1544, Pietro Andrea Mattioli, a Tuscan physician and botanist, suggested that tomatoes might be edible, but no record exists of anyone consuming them at this time. On October 31, 1548 the tomato was given its first name anywhere in Europe when a house steward of Cosimo I de' Medici, then the Duke of Florence, wrote to the De' Medici's private secretary that the basket of pomi d'oro "had arrived safely." At this time, the label pomi d'oro was also used to refer to figs, melons, and citrus fruits in treatises by scientists.[22]

In the early years, tomatoes were mainly grown as ornamentals in Italy. For example, the Florentine aristocrat Giovanvettorio Soderini wrote how they "were to be sought only for their beauty" and were grown only in gardens or flower beds. Tomatoes were grown in elite town and country gardens in the fifty years or so following their arrival in Europe and were only occasionally depicted in works of art. However, in 1592 the head gardener at the botanical garden of Aranjuez near Madrid, under the patronage of Philip II of Spain wrote, "it is said [tomatoes] are good for sauces." Besides this account, tomatoes remained exotic plants grown for ornamental purposes, but rarely for culinary use. The combination of pasta with tomato sauce was developed only in the late nineteenth century. Today around 32,000 acres (12,950 ha) of tomatoes are cultivated in Italy, although there are still areas where relatively few tomatoes are grown and consumed.[22]

Plants that arrived by land, sea, or air in the times before 1492 are called archaeophytes, and plants introduced to Europe after those times are called neophytes. In addition to the diseases mentioned above, many species of organisms were introduced to new habitats on the other side of the world accidentally or incidentally. These include such animals as brown rats, earthworms (apparently absent from parts of the pre-Columbian New World), and zebra mussels, which arrived on ships.[23]

Invasive species of plants and pathogens also were introduced by chance, including such weeds as tumbleweeds (Salsola spp.) and wild oats (Avena fatua). Some plants introduced intentionally, such as the kudzu vine introduced in 1894 from Japan to the United States to help control soil erosion, have since been found to be invasive pests in the new environment. Fungi have been transported, such as the one responsible for Dutch elm disease, killing American elms in North American forests and cities, where many had been planted as street trees. Some of the invasive species have become serious ecosystem and economic problems after establishing in the New World environments.[24][25]

A beneficial, although probably unintentional, introduction is Saccharomyces eubayanus, the yeast responsible for lager beer now thought to have originated in Patagonia.[26]

Escaped and feral populations of non-indigenous animals have thrived in both the Old and New Worlds, often displacing native species.

Gray squirrels have been particularly successful in colonising Great Britain and populations of raccoons can now be found in some regions of Germany, the Caucasus and Japan. Fur farm escapees such as coypu and American mink have extensive populations in the Old World.

In the New World, populations of feral European cats, pigs, horses and cattle are common.