Coria was a fort and town, located 2.5 miles (4.0 km) south of Hadrian's Wall, in the Roman province of Britannia at a point where a major Roman North-South road (Dere Street) bridged the River Tyne and met another Roman road (Stanegate), which ran East-West between Coria and Luguvalium (the modern Carlisle) in the Solway Plain . Its full Latin name is uncertain. Today it is known as Corchester or Corbridge Roman Site, adjoining Corbridge in the English county of Northumberland. It is currently in the guardianship of English Heritage and is partially exposed as a visitor attraction, including a site museum.

The place-name appears in contemporary records as both Corstopitum and Corie Lopocarium. These forms are generally recognised as corrupt. Suggested reconstructions include Coriosopitum, Corsopitum or Corsobetum.[1] However, the Vindolanda tablets show that it was locally referred to by the simple form, Coria,[2] the name for a local tribal centre. The suffix ought to represent the name of the local tribe, a member of the Brigantian confederation, but its correct form is, as yet, unknown.[3] It subsequently gave its name to Corbridge, albeit by processes which are debated.[4]

There is evidence of Iron Age round houses on the site, but the first Romans in the area built the Red House Fort, half a mile (800 m) to the west, as a supply camp for Agricola's campaigns.[5] 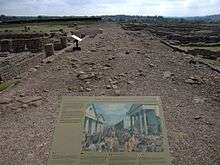 Soon after Roman victories in modern Scotland, around AD 84, a new fort was built on the present site with turf ramparts and timber gates. Internally, barrack blocks surrounded a headquarters building, a commander’s residence, administrative staff accommodation, workshops and granaries. It was probably occupied by a 500-strong cavalry unit called the Ala Petriana, but was destroyed by fire in AD 105. A second timber fort was built guarding a major crossing of the River Tyne at a time when the Solway Firth-Tyne divide was the Roman frontier. Around AD 120, when Hadrian’s Wall was built, the fort was again rebuilt, probably to house infantry troops away from the Wall. About twenty years later, when the frontier was pushed further north and the Antonine Wall built, the first stone fort was erected under the Governor Quintus Lollius Urbicus.[5]

English Heritage has now released a number of monographs on the forts along Hadrian's Wall through the Archaeology Data Service. Bishop and Dore's [6] report on the excavations at Corbridge 1947-80 reveal the complex history of the sequence of mainly earth and timber forts which preceded the masonry buildings (available here). The reports also cover a metal hoard found within the fort, possibly linked to the abandonment between AD 122 and 138 [7] (also available on the Archaeology Data Service website).

After the Romans fell back to Hadrian's Wall in AD 163, the army seems to have been largely removed from Coria. Its ramparts were levelled and a major rebuilding programme of a very different nature was instigated. A series of probable temples were erected, followed by granaries, a fountain house and a large courtyard complex which may have been intended to become a civilian forum or a military storehouse and workshop establishment. It was never finished in its original plan.[5]

Burnt timber buildings may relate to Cassius Dio's reference to enemy tribes crossing the frontier, but by the early 3rd century there was more construction. Two compounds opposite the supposed forum were built as part of a military supply depot within the town. It was connected with both the Second and the Sixth Legion and may have been part of the supply network for Septimius Severus' northern campaigns.[5]

Information on the 3rd- and 4th-century town is lacking, but an elaborate house was certainly put up which may have housed an Imperial official of some kind. Coria was probably a major market centre for the mineral industries in the area – lead, iron and coal – as well as agriculture, as evidenced by the granaries. A pottery store has also been identified. When occupation came to an end is unclear. It is not even known if the site was still occupied when the Anglo-Saxons arrived to found adjoining Corbridge.[5]

The Corbridge Hoard was found here.

In Rosemary Sutcliff's 1965 novel The Mark of the Horse Lord the lead character is a gladiator in Corstopitum, before leaving to join the Dal Riata north of the Antonine Wall.

In Juliet Landon's 2006 historical romance The Warlord's Mistress, it is 208AD, and a beautiful spy from one of the Celtic tribes holding out against Roman rule is living in Coria, where she meets one of the Roman rulers!

In Ruth Downie's 2008 novel, Terra Incognita, the protagonists find themselves near Coria, as the action opens.