Vindolanda[note 1] was a Roman auxiliary fort (castrum) just south of Hadrian's Wall, which it predates, in northern England. Located near the modern village of Bardon Mill, it guarded the Stanegate, the Roman road from the River Tyne to the Solway Firth. It is noted for the Vindolanda tablets, among the most important finds of military and private correspondence (written on wooden tablets) found anywhere in the Roman Empire.

The first post-Roman record of the ruins at Vindolanda was made by the antiquarian William Camden, in his Britannia (1586). Occasional travellers reached the site over the next two hundred years, and the accounts they left are useful because they predate much of the stone-stealing that has damaged the site. The military bath-house was still partly roofed when Christopher Hunter visited the site in 1702. In about 1715 an excise officer named John Warburton found an altar there, which he removed. In 1814 the first real archaeological work was begun, by the Rev. Anthony Hedley. Hedley died in 1835, before writing up his discoveries. Little more was done for a long time, although in 1914 a workman found another altar at the site, set up by the civilians living at the fort in honour of the Divine House and Vulcan. Several names for the site are used in the early records, including Chesters on Caudley, Little Chesters, the Bower, and Chesterholm; the altar found in 1914 confirmed that the true Roman name for the site was "Vindolanda", which had been in dispute as one early source referred to it as "Vindolana".[1]

The garrison were auxiliary infantry or cavalry units, not components of Roman legions. From the early third century AD onwards, this was the Fourth Cohort of Gauls. It had been presumed that this title was by this time purely nominal, with auxiliary troops being recruited locally, but an inscription found in a recent season of excavations suggests that native Gauls were still to be found in the regiment and that they liked to distinguish themselves from British soldiers.[2] The inscription reads:

A free translation of this is "The troops from Gaul dedicate this statue to the goddess Gallia with the full support of the British-born troops".[2]

The earliest Roman forts at Vindolanda were built of wood and turf.[3] The remains are now buried as much as 4 metres deep in the anoxic waterlogged soil. There are 5 timber forts, built (and demolished) one after the other. The first, a small fort was probably built by the 1st Cohort of Tungrians about AD 85. By about AD 95 this was replaced by a larger wooden fort built by the 9th Cohort of Batavians, a mixed infantry-cavalry unit of about 1000 men. That fort was repaired in about AD 100 under the command of the Roman prefect Flavius Cerialis.[4]

When the 9th Cohort of Batavians left in AD 105, their fort was demolished. The 1st Cohort of Tungrians came back to Vindolanda, built a larger wooden fort, and remained here until Hadrian's Wall was built around AD 122, when they moved, most likely to Vercovicium (Housesteads).[5]

Soon after Hadrian's Wall was built, most of its men were moved north to the Antonine Wall. A stone fort was built at Vindolanda, possibly for the 2nd Cohort of Nervians.[5]

From AD 208 to 211, there was a major rebellion against Rome in Britain, and the Emperor Septimius Severus led an army to Britain to cope with it personally. The old stone fort was demolished, and replaced by an unconventional set of army buildings on the west, and an unusual array of many round stone huts where the old fort had been: some of these circular huts are visible by the north and the southwest walls of the final stone fort. The Roman army may have built these to accommodate families of British farmers in this unsettled period.[6]

Septimius Severus died at York in AD 211; his sons paid off the rebels and left for Rome. The stone buildings were demolished, and a large new stone fort was built where the huts had been, for the 4th Cohort of Gauls.[7]

A vicus, a self-governing village, developed to the west of the fort. The vicus contains several rows of buildings, each containing several one-room chambers. Most are not connected to the existing drainage system. The one that does was perhaps a butchery where, for health reasons, an efficient drain would have been important. A stone altar found in 1914 (and exhibited in the museum) proves that the settlement was officially a vicus, and that it was named Vindolanda.[7]

To the south of the fort is a large Roman bath.The Roman baths were used by many.

The later stone fort, and the adjoining village, remained in use until about AD 285, when it was largely abandoned for some reason.[8]

About AD 300 the fort was again rebuilt, but the vicus was not reoccupied, so most likely the area remained too unsafe for life outside the defended walls of the fort.[9]

In about 370 AD the fort was roughly repaired, perhaps by irregular soldiers. There is no evidence for the traditional view that Roman occupation ended suddenly in AD 410; it may have declined slowly.[9]

In the 1930s, the house at Chesterholm where the museum is now located was purchased by archaeologist Eric Birley, who was interested in excavating the site. The excavations have been continued by his sons, Robin and Anthony, and his grandson, Andrew Birley, into the present day. They are undertaken each summer, and some of the archaeological deposits reach depths of six metres. The anoxic conditions at these depths have preserved thousands of artefacts, such as wooden writing tablets, that normally disintegrate in the ground,[note 2] thus providing an opportunity to gain a fuller understanding of Roman life – military and otherwise – on the northern frontier.

In 2010, the remains of what is thought to be a girl between the ages of 8 and 10 years old, with her hands tied, were uncovered in a shallow pit in what was the barrack room. She is believed to have been murdered about 1,800 years ago.[10]

Along with ongoing excavations (in season) and excavated remains, a full-size replica of a section of Hadrian's Wall in both stone and turf can be seen on the site. As of yet there is no reconstruction of the Vallum. 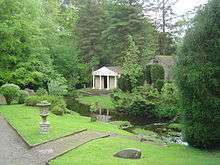 Gardens outside the museum

The Vindolanda site museum, also known as Chesterholm Museum, conserves and displays finds from the site. The museum is set in gardens, which include full-sized reconstructions of a Roman temple, a Roman shop, Roman house and Northumbrian croft, all with audio presentations. Exhibits include Roman boots, shoes, armour, jewellery and coins, infra-red photographs of the writing tablets and, from 2011, a small selection of the tablets themselves, on loan from the British Museum. 2011 saw the reopening of the museum at Vindolanda, and also the Roman Army Museum at Carvoran, refurbished with a grant from the Heritage Lottery Fund.[11]

A spectacular find in 2006 was the richly detailed bronze and silver brooch (fibula) modelled with the figure of Mars, on which Quintus Sollonius, a Gaul to judge by his name, had carefully punched his name before he lost it in the early second century; nothing comparably fine has been recovered along the Wall.[12]

In 1970, the Vindolanda Trust, a registered charity,[13] was founded to administer the site and its museum, and in 1997, the Trust took over the running of the Roman Army Museum at Carvoran, another Hadrian's Wall fort, which it had acquired in 1972.