For the nearby National Museum of Wales centre, see National Roman Legion Museum. 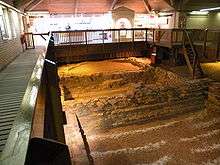 Interior of the Roman Baths Museum 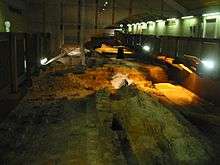 The Caerleon Roman Fortress and Baths, also known as the Roman Baths Museum, is located in Caerleon in the city of Newport, south-east Wales. It is run by the Welsh historic environment service - Cadw.

Roman Wales was the farthest point west that the Roman Empire in Roman Britain extended to, and as a defence point the fortress at Caerleon, built in 75 AD, was one of only three permanent Roman Legionary fortresses in Roman Britain. It was occupied and operational for just over 200 years.

The Roman Baths Museum lies inside what remains of the fortress of Isca Augusta close to the National Roman Legion Museum. The baths museum has a covered walkway over part of the remains of the military bath house.