The Corwin Amendment is a proposed amendment to the United States Constitution that would shield "domestic institutions" of the states (which in 1861 included slavery) from the constitutional amendment process and from abolition or interference by Congress.[1][2] It was passed by the 36th Congress on March 2, 1861, and submitted to the state legislatures for ratification. Senator William H. Seward of New York introduced the amendment in the Senate and Representative Thomas Corwin of Ohio introduced it in the House of Representatives. It was one of several measures considered by Congress in an ultimately unsuccessful attempt to attract the seceding states back into the Union and in an attempt to entice border slave states to stay.[3][4]

No amendment shall be made to the Constitution which will authorize or give to Congress the power to abolish or interfere, within any State, with the domestic institutions thereof, including that of persons held to labor or service by the laws of said State.[1][5]

The text refers to slavery with terms such as "domestic institutions" and "persons held to labor or service" and avoids using the word "slavery", following the example set at the Constitutional Convention of 1787, which referred to slavery in its draft of the Constitution with comparable descriptions of legal status: "Person held to Service", "the whole Number of free Persons ..., three fifths of all other Persons", "The Migration and Importation of such Persons".[6] 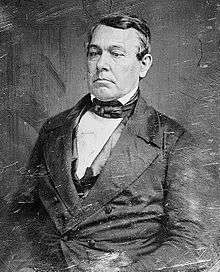 Representative Thomas Corwin of Ohio, author and namesake of the amendment.

In the Congressional session that began in December 1860, more than 200 resolutions with respect to slavery,[7] including 57 resolutions proposing constitutional amendments,[8] were introduced in Congress. Most represented compromises designed to avert military conflict. Mississippi Democratic Senator Jefferson Davis proposed one that explicitly protected property rights in slaves.[8] A group of House members proposed a national convention to accomplish secession as a "dignified, peaceful, and fair separation" that could settle questions like the equitable distribution of the federal government's assets and rights to navigate the Mississippi River.[9]

On February 27, 1861, the House of Representatives considered the following text of a proposed constitutional amendment:[10]

No amendment of this Constitution, having for its object any interference within the States with the relations between their citizens and those described in second section of the first article of the Constitution as "all other persons," shall originate with any State that does not recognize that relation within its own limits, or shall be valid without the assent of every one of the States composing the Union.

Corwin proposed his own text as a substitute and those who opposed him failed on a vote of 68 to 121. The House then declined to give the resolution the required two-thirds vote, with a tally of 120 to 61, and then of 123 to 71.[10][11] On February 28, 1861, however, the House approved Corwin's version by a vote of 133 to 65.[12] The contentious debate in the House was relieved by abolitionist Republican Owen Lovejoy of Illinois, who questioned the amendment's reach: "Does that include polygamy, the other twin relic of barbarism?" Missouri Democrat John S. Phelps answered: "Does the gentleman desire to know whether he shall be prohibited from committing that crime?"[8] 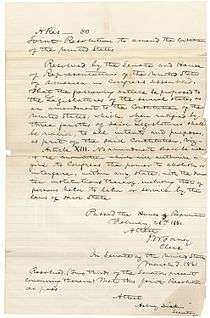 The Corwin Amendment as it was approved by the House of Representatives on February 28, 1861 and the Senate on March 2, 1861.

On March 2, 1861, the United States Senate adopted it, with no changes, on a vote of 24 to 12.[13] Since proposed constitutional amendments require a two-thirds majority, 132 votes were required in the House and 24 in the Senate. The Senators and Representatives from the seven slave states that had already declared their secession from the Union did not vote on the Corwin Amendment.[14] The resolution called for the amendment to be submitted to the state legislatures and to be adopted "when ratified by three-fourths of said Legislatures."[15] Its supporters believed that the Corwin Amendment had a greater chance of success in the legislatures of the Southern states than would have been the case in state ratifying conventions, since state conventions were being conducted throughout the South at which votes to secede from the Union were successful—just as Congress was considering the Corwin Amendment.

The Corwin Amendment was the second proposed "Thirteenth Amendment" submitted to the states by Congress. The first was the similarly ill-fated Titles of Nobility Amendment in 1810.

Out-going President James Buchanan, a Democrat, endorsed the Corwin Amendment by taking the unprecedented step of signing it.[16] His signature on the Congressional joint resolution was unnecessary, as the Supreme Court, in Hollingsworth v. Virginia (1798), ruled that the President has no formal role in the constitutional amendment process.

Abraham Lincoln, in his first inaugural address, said of the Corwin Amendment:[2][17]

I understand a proposed amendment to the Constitution—which amendment, however, I have not seen—has passed Congress, to the effect that the Federal Government shall never interfere with the domestic institutions of the States, including that of persons held to service ... holding such a provision to now be implied constitutional law, I have no objection to its being made express and irrevocable.

Just weeks prior to the outbreak of the Civil War, Lincoln sent a letter to each state's governor transmitting the proposed amendment,[18] noting that Buchanan had approved it.[19]

Attempted withdrawal of the Corwin Amendment

On February 8, 1864, during the 38th Congress, with the prospects for a Union victory improving, Republican Senator Henry B. Anthony of Rhode Island introduced Senate (Joint) Resolution No. 25[20] to withdraw the Corwin Amendment from further consideration by the state legislatures and to halt the ratification process. That same day, Anthony's joint resolution was referred to the Senate's Committee on the Judiciary. On May 11, 1864, Illinois Senator Lyman Trumbull, Chairman of the Judiciary Committee, received the Senate's permission to discharge Senate (Joint) Resolution No. 25 from the Committee, with no further action having been taken on Anthony's joint resolution.[21]

The Corwin Amendment was ratified by:

In 1963, more than a century after the Corwin Amendment was submitted to the state legislatures by the Congress, a joint resolution to ratify it was introduced in the Texas House of Representatives by Dallas Republican Henry Stollenwerck.[30] The joint resolution was referred to the House's Committee on Constitutional Amendments on March 7, 1963, but received no further consideration.[31]

The Corwin Amendment, when viewed through the lens of the plain meaning rule (literal rule), would have, had it been ratified by the required number of states prior to 1865, made institutionalized slavery immune to the constitutional amendment procedures and to interference by Congress. As a result, the later Reconstruction Amendments (Thirteenth, Fourteenth and Fifteenth) would not have been permissible, as they abolish or interfere with the domestic institution of the states.