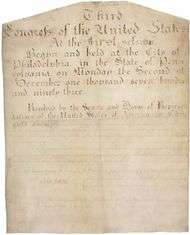 The Eleventh Amendment in the National Archives

The Eleventh Amendment (Amendment XI) to the United States Constitution, which was passed by Congress on March 4, 1794, and ratified by the states on February 7, 1795, deals with each state's sovereign immunity and was adopted to overrule the U.S. Supreme Court's decision in Chisholm v. Georgia, 2 U.S. 419 (1793).[1]

The Eleventh Amendment was the first Constitutional amendment adopted after the Bill of Rights. The amendment was adopted following the Supreme Court's ruling in Chisholm v. Georgia, 2 U.S. 419 (1793). In Chisholm, the Court ruled that federal courts had the authority to hear cases in law and equity brought by private citizens against states and that states did not enjoy sovereign immunity from suits made by citizens of other states in federal court. Thus, the amendment clarified Article III, Section 2 of the Constitution, which gives diversity jurisdiction to the judiciary to hear cases "between a state and citizens of another state."

The Eleventh Amendment was proposed by the 3rd Congress on March 4, 1794, when it was approved by the House of Representatives by vote of 81 – 9,[2] having been previously passed by the Senate, 23 – 2, on January 14, 1794.[3] The amendment was ratified by the state legislatures of the following states:[4]

On January 8, 1798, approximately three years after the Eleventh Amendment's adoption, President John Adams stated in a message to Congress that the Eleventh Amendment had been ratified by the necessary number of States and that it was now a part of the Constitution of the United States.[5] New Jersey and Pennsylvania did not take action on the amendment; neither did Tennessee, which had become a State on June 16, 1796.

In Hollingsworth v. Virginia, 3 U.S. 378 (1798), the Supreme Court held that every pending action brought under Chisholm had to be dismissed because of the amendment's adoption.[6]

The amendment's text does not mention suits brought against a state by its own citizens. However, in Hans v. Louisiana, 134 U.S. 1 (1890), the Supreme Court ruled that the amendment reflects a broader principle of sovereign immunity. As Justice Anthony Kennedy later stated in Alden v. Maine, 527 U.S. 706 (1999):

[S]overeign immunity derives not from the Eleventh Amendment but from the structure of the original Constitution itself. ... Nor can we conclude that the specific Article I powers delegated to Congress necessarily include, by virtue of the Necessary and Proper Clause or otherwise, the incidental authority to subject the States to private suits as a means of achieving objectives otherwise within the scope of the enumerated powers.[7]

However, Justice David Souter, writing for a four-Justice dissent in Alden, said the states surrendered their sovereign immunity when they ratified the Constitution. He read the amendment's text as reflecting a narrow form of sovereign immunity that limited only the diversity jurisdiction of the federal courts. He concluded that the states are not insulated from suits by individuals by either the Eleventh Amendment in particular or the Constitution in general.[8]

The United States Court of Appeals for the First Circuit has ruled that Puerto Rico enjoys Eleventh Amendment immunity.[9]