The United States in 1819 (the light orange and light green areas were not then part of the United States). The Missouri Compromise prohibited slavery in the unorganized territory of the Great Plains (upper dark green) and permitted it in Missouri (yellow) and the Arkansas Territory (lower blue area).

The Missouri Compromise was a United States federal statute devised by Henry Clay. It regulated slavery in the country's western territories by prohibiting the practice in the former Louisiana Territory north of the parallel 36°30′ north, except within the boundaries of the proposed state of Missouri. The compromise was agreed to by both the pro-slavery and anti-slavery factions in the United States Congress and passed as a law in 1820, under the presidency of James Monroe.

The Missouri Compromise was effectively repealed by the Kansas–Nebraska Act, submitted to Congress by Stephen A. Douglas in January 1854. The Act opened Kansas Territory and Nebraska Territory to slavery and future admission of slave states by allowing white male settlers[1] in those territories to determine through popular sovereignty whether they would allow slavery within each territory. Thus, the Kansas–Nebraska Act effectively undermined the prohibition on slavery in territory north of 36°30′ latitude which had been established by the Missouri Compromise. This change was viewed by Free Soilers and many abolitionist Northerners as an aggressive, expansionist maneuver by the slave-owning South, and led to the creation of the Republican Party.

Although already superseded by the Kansas–Nebraska Act, the Supreme Court indicated that the Missouri Compromise was unconstitutional in the 1857 Dred Scott v. Sandford ruling. 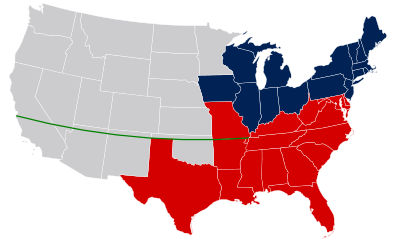 Extension of the Missouri Compromise Line westward was discussed by Congress during the Texas Annexation in 1845, during the Compromise of 1850, and as part of the proposed Crittenden Compromise in 1860, but the line never reached the Pacific.

To balance the number of "slave states" and "free states," the northern region of what was then Massachusetts, the District of Maine, ultimately gained admission into the United States as a free state to become Maine. This only occurred as a result of a compromise involving slavery in Missouri, and in the federal territories of the American west.[2] The admission of another slave state would increase the South's power at a time when northern politicians had already begun to regret the Constitution's Three-Fifths Compromise. Although more than 60 percent of whites in the United States lived in the North, by 1818 northern representatives held only a slim majority of congressional seats. The additional political representation allotted to the South as a result of the Three-Fifths Compromise gave southerners more seats in the House of Representatives than they would have had if the number was based on just free population. Moreover, since each state had two Senate seats, Missouri's admission as a slave state would result in more southern than northern senators.[3] A bill to enable the people of the Missouri Territory to draft a constitution and form a government preliminary to admission into the Union came before the House of Representatives in Committee of the Whole, on February 13, 1819. James Tallmadge of New York offered an amendment, named the Tallmadge Amendment, that forbade further introduction of slaves into Missouri, and mandated that all children of slave parents born in the state after its admission should be free at the age of 25. The committee adopted the measure and incorporated it into the bill as finally passed on February 17, 1819, by the house. The United States Senate refused to concur with the amendment, and the whole measure was lost.[4][5]

During the following session (1819–1820), the House passed a similar bill with an amendment, introduced on January 26, 1820, by John W. Taylor of New York, allowing Missouri into the union as a slave state. The question had been complicated by the admission in December of Alabama, a slave state, making the number of slave and free states equal. In addition, there was a bill in passage through the House (January 3, 1820) to admit Maine as a free state.[6]

The Senate decided to connect the two measures. It passed a bill for the admission of Maine with an amendment enabling the people of Missouri to form a state constitution. Before the bill was returned to the House, a second amendment was adopted on the motion of Jesse B. Thomas of Illinois, excluding slavery from the Louisiana Territory north of the parallel 36°30′ north (the southern boundary of Missouri), except within the limits of the proposed state of Missouri.[7]

The vote in the Senate was 24 for the compromise, to 20 against. The amendment and the bill passed in the Senate on February 17 and February 18, 1820.[7] The House then approved the Senate compromise amendment, on a vote of 90 to 87, with those 87 votes coming from free state representatives opposed to slavery in the new state of Missouri.[7] The House then approved the whole bill, 134 to 42 (the latter votes being from southern states).[7]

The two houses were at odds not only on the issue of the legality of slavery, but also on the parliamentary question of the inclusion of Maine and Missouri within the same bill. The committee recommended the enactment of two laws, one for the admission of Maine, the other an enabling act for Missouri. They recommended against having restrictions on slavery but for including the Thomas amendment. Both houses agreed, and the measures were passed on March 5, 1820, and were signed by President James Monroe on March 6.

The question of the final admission of Missouri came up during the session of 1820–1821. The struggle was revived over a clause in Missouri's new constitution (written in 1820) requiring the exclusion of "free negroes and mulattoes" from the state. Through the influence of Kentucky Senator Henry Clay "The Great Compromiser", an act of admission was finally passed, upon the condition that the exclusionary clause of the Missouri constitution should "never be construed to authorize the passage of any law" impairing the privileges and immunities of any U.S. citizen. This deliberately ambiguous provision is sometimes known as the Second Missouri Compromise.[8]

Animation showing the free/slave status of U.S. states and territories, 1789–1861, including the Missouri Compromise.

During the decades following 1820, Americans hailed the 1820 agreement as an essential compromise almost on the sacred level of the Constitution itself.[9] Although the Civil War broke out in 1861, historians often say the Compromise helped postpone the war.[10]

These disputes involved the competition between the southern and northern states for power in Congress and for control over future territories. There were also the same factions emerging as the Democratic-Republican party began to lose its coherence.

In an April 22 letter to John Holmes, Thomas Jefferson wrote that the division of the country created by the Compromise Line would eventually lead to the destruction of the Union:[11]

...but this momentous question, like a fire bell in the night, awakened and filled me with terror. I considered it at once as the knell of the Union. it is hushed indeed for the moment. but this is a reprieve only, not a final sentence. A geographical line, coinciding with a marked principle, moral and political, once conceived and held up to the angry passions of men, will never be obliterated; and every new irritation will mark it deeper and deeper.[12][13]

Congress' consideration of Missouri's admission also raised the issue of sectional balance, for the country was equally divided between slave and free states with eleven each. To admit Missouri as a slave state would tip the balance in the Senate (made up of two senators per state) in favor of the slave states. For this reason, northern states wanted Maine admitted as a free state.

On the constitutional side, the Compromise of 1820 was important as the example of Congressional exclusion of slavery from U.S. territory acquired since the Northwest Ordinance.

The Compromise was deeply disappointing to African-Americans in both the North and South. It stopped the southern progression of gradual emancipation at Missouri's southern border and legitimized slavery as a southern institution.[17]

The provisions of the Missouri Compromise forbidding slavery in the former Louisiana Territory north of the parallel 36°30′ north were effectively repealed by Stephen A. Douglas's Kansas–Nebraska Act of 1854. The repeal of the Compromise caused outrage in the North and sparked the return to politics of Abraham Lincoln,[18] who excoriated Douglas's act in his "Peoria Speech" (October 16, 1854).