Crime in the United States

Crime in the United States has been recorded since colonization. Crime rates have varied over time, with a sharp rise after 1963, reaching a broad peak between the 1970s and early 1990s. Since then, crime has declined significantly in the United States,[1] and current crime rates are approximately the same as those of the 1960s.[2]

Statistics on specific crimes are indexed in the annual Uniform Crime Reports by the Federal Bureau of Investigation (FBI) and by annual National Crime Victimization Surveys by the Bureau of Justice Statistics.[3] In addition to the primary Uniform Crime Report known as Crime in the United States, the FBI publishes annual reports on the status of law enforcement in the United States.[2] The report's definitions of specific crimes are considered standard by many American law enforcement agencies.[4] According to the FBI, index crime in the United States includes violent crime and property crime.[5] Violent crime consists of four criminal offenses: murder and non-negligent manslaughter, forcible rape, robbery, and aggravated assault; property crime consists of burglary, larceny, motor vehicle theft, and arson.[5] 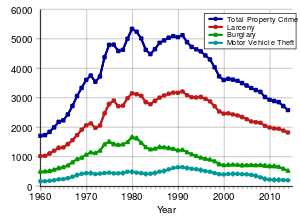 Property crime rates in the United States per 100,000 population beginning in 1960. Source: Bureau of Justice Statistics.

In the long term, violent crime in the United States has been in decline since colonial times.[6] However, during the early 20th century, crime rates in the United States were higher compared to parts of Western Europe. For example, 198 homicides were recorded in the American city of Chicago in 1916, a city of slightly over 2 million at the time. This level of crime was not exceptional when compared to other American cities such as New York, but was much higher relative to European cities, such as London, which then had three times the population but recorded only 45 homicides in the same year.[7]

After World War II, crime rates increased in the United States, peaking from the 1970s to the early 1990s. Violent crime nearly quadrupled between 1960 and its peak in 1991. Property crime more than doubled over the same period. Since the 1990s, however, crime in the United States has declined steeply. Several theories have been proposed to explain this decline:

Each state has a set of statutes enforceable within its own borders. A state has no jurisdiction outside of its borders, even though still in the United States. It must request extradition from the state in which the suspect has fled. In 2014, there were 186,873 felony suspects outside specific states jurisdiction against whom no extradition would be sought. Philadelphia has about 20,000 of these since it is near a border with four other states. Extradition is estimated to cost a few hundred dollars per case.[15] 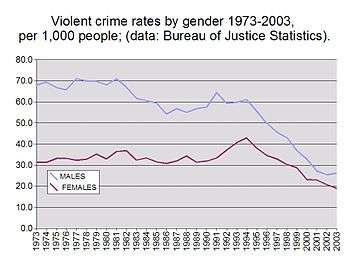 Further information: Race and crime in the United States 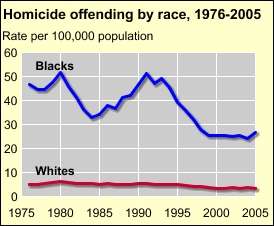 Reporting at the annual meeting of the American Sociological Association (August 3, 2008), sociologists at Bowling Green State University found that men who attend college are more likely to commit property crimes during their college years than their non-college-attending peers. The research draws from three waves of data from the National Longitudinal Study of Adolescent Health and examines education, crime levels, substance abuse and socializing among adolescents and young adults.[28] Also, according to Naci Mocan of the University of Colorado and Erdal Tekin of Georgia State University, "We find that unattractive individuals commit more crime in comparison to average-looking ones, and very attractive individuals commit less crime in comparison to those who are average-looking."[29] 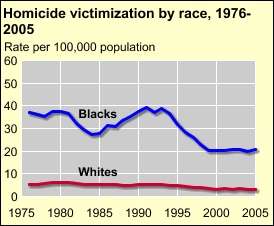 This graph shows the homicide victimization rate for whites and blacks, according to the US Bureau of Justice Statistics.

Patterns are found within the victimology of crime in the United States. Overall, males, people with lower incomes, those younger than 25, and non-whites were more likely to report being the victim of crime.[30] Income, gender, and age had the most dramatic effect on the chances of a person being victimized by crime, while the characteristic of race depended upon the crime being committed.[30]

In terms of gender, males were more likely to become crime victims than were females,[31] with 79% percent of all murder victims being male. Males were twice as likely to be carjacked as females.[31] In terms of income, households with a 2008 income of less than $15,000 were significantly more likely to have their homes burgled.[31]

Concerning age, those younger than twenty-five were more likely to fall victim to crime, especially violent crime.[32] The chances of being victimized by violent crime decreased far more substantially with age than the chances of becoming the victim of property crime.[32] For example, 3.03% of crimes committed against a young person were theft, while 20% of crimes committed against an elderly person were theft.[32]

As of 2007, violent crime against homeless people is increasing.[33][34] The rate of such documented crimes in 2005 was 30% higher than of those in 1999.[35] 75% of all perpetrators are under the age of 25. Studies and surveys indicate that homeless people have a much higher criminal victimization rate than the non-homeless, but that most incidents never get reported to authorities. In recent years, largely due to the efforts of the National Coalition for the Homeless (NCH) and academic researchers the problem of violence against the homeless has gained national attention. The NCH called deliberate attacks against the homeless hate crimes in their report Hate, Violence, and Death on Mainstreet USA (they retain the definition of the American Congress). The Center for the Study of Hate & Extremism at California State University, San Bernardino in conjunction with the NCH found that 155 homeless people were killed by non-homeless people in "hate killings", while 76 people were killed in all the other traditional hate crime homicide categories such as race and religion, combined.[34] The CSHE contends that negative and degrading portrayals of the homeless contribute to a climate where violence takes place.

The likelihood of falling victim to crime relates to both demographic and geographic characteristics.[1] Overall, men, minorities, the young, and those in urban areas are more likely to be crime victims.[1] The likelihood of perpetrating crime also relates to demography.

A map of U.S. states by incarceration rate under state prison jurisdiction (but excluding jail and federal prison inmates) per 100,000 population.

As of 2001, the chances of going to prison in percentages for various demographic groups 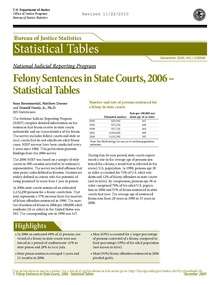 Felony Sentences in State Courts, study by the United States Department of Justice.

The manner in which America's crime rate compared to other countries of similar wealth and development depends on the nature of the crime used in the comparison.[41] Overall crime statistic comparisons are difficult to conduct, as the definition and categorization of crimes varies across countries. Thus an agency in a foreign country may include crimes in its annual reports which the United States omits, and vice versa.

However, some countries such as Canada, however, have similar definitions of what constitutes a violent crime, and nearly all countries had the same definition of the characteristics that constitutes a homicide. Overall the total crime rate of the United States is higher than developed countries, specifically Europe, with South American countries and Russia being the exceptions.[42] Some types of reported property crime in the U.S. survey as lower than in Germany or Canada, yet the homicide rate in the United States is substantially higher as is the prison population.

France does not count minor violence such as punching or slapping as assault, whereas Austria, Germany, and Finland do count such occurrences.[47]

Crime rates are necessarily altered by averaging neighborhood higher or lower local rates over a larger population which includes the entire city. Having small pockets of dense crime may lower a city's average crime rate.

Note that these statistics are meaningless since there is no indication of time period, or if the numbers are per person, per 100 people, per million people, etc. To apply meaning to numbers there must be context.

In the United States, the number of homicides where the victim and offender relationship was undetermined has been increasing since 1999 but has not reached the levels experienced in the early 1990s. In 14% of all murders, the victim and the offender were strangers. Spouses and family members made up about 15% of all victims, about one-third of the victims were acquaintances of the assailant, and the victim and offender relationship was undetermined in over one-third of homicides. Gun involvement in homicides were gang-related homicides which increased after 1980, homicides that occurred during the commission of a felony which increased from 55% in 1985 to 77% in 2005, homicides resulting from arguments which declined to the lowest levels recorded recently, and homicides resulting from other circumstances which remained relatively constant. Because gang killing has become a normal part of inner cities, many including police hold preconceptions about the causes of death in inner cities. When a death is labeled gang-related it lowers the chances that it will be investigated and increases the chances that the perpetrator will remain at large. In addition, victims of gang killings often determine the priority a case will be given by police. Jenkins (1988) argues that many serial murder cases remain unknown to police and that cases involving Black offenders and victims are especially likely to escape official attention.[52] 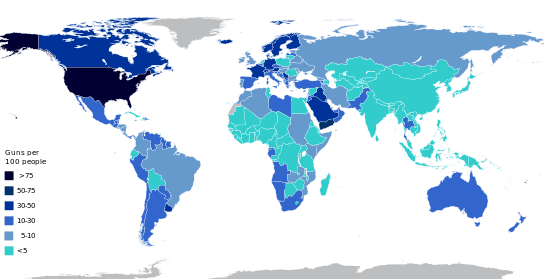 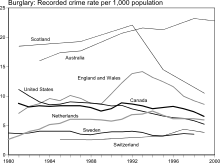 The burglary rates of selected industrialized countries as published by the U.S. Bureau of Justice Statistics

According to a 2004 study by the Bureau of Justice Statistics, looking at the period from 1981 to 1999, the United States had a lower surveyed residential burglary rate in 1998 than Scotland, England, Canada, the Netherlands, and Australia. The other two countries included in the study, Sweden and Switzerland, had only slightly lower burglary rates. For the first nine years of the study period the same surveys of the public showed only Australia with rates higher than the United States. The authors noted various problems in doing the comparisons including infrequent data points. (The United States performed five surveys from 1995 to 1999 when its rate dipped below Canada's, while Canada ran a single telephone survey during that period for comparison.)[41]

According to a 2001 report from UNICEF, the United States has the highest rate of deaths from child abuse and neglect of any industrialized nation, at 2.4 per 100,000 children; France has 1.4, Japan 1, UK 0.9 and Germany 0.8. According to the US Department of Health, the state of Texas has the highest death rate, at 4.05 per 100,000 children, New York has 2.46, Oregon 1.49 and New Hampshire 0.35. [61] A UNICEF report on child wellbeing stated that the United States and the United Kingdom ranked lowest among industrial nations with respect to the wellbeing of children.[62]

It is quite common for crime in American cities to be highly concentrated in a few, often economically disadvantaged areas. For example, San Mateo County, California had a population of approximately 707,000 and 17 homicides in 2001. Six of these 17 homicides took place in poor East Palo Alto, which had a population of roughly 30,000. So, while East Palo Alto accounted for a mere 4.2% of the population, about one-third of the homicides took place there.[70]

Number and growth of criminal laws

There are conflicting opinions on the number of federal crimes,[71][72] but many have argued that there has been explosive growth and it has become overwhelming.[73][74][75] In 1982, the U.S. Justice Department could not come up with a number, but estimated 3,000 crimes in the United States Code.[71][72][76] In 1998, the American Bar Association (ABA) said that it was likely much higher than 3,000, but didn't give a specific estimate.[71][72] In 2008, the Heritage Foundation published a report that put the number at a minimum of 4,450.[72] When staff for a task force of the U.S. House Judiciary Committee asked the Congressional Research Service (CRS) to update its 2008 calculation of criminal offenses in the United States Code in 2013, the CRS responded that they lack the manpower and resources to accomplish the task.[77]