For other uses, see Breda (disambiguation).

Breda (Dutch pronunciation: [breːˈdaː]) is a municipality and a city in the southern part of the Netherlands. The name Breda derived from brede Aa ('wide Aa' or 'broad Aa') and refers to the confluence of the rivers Mark and Aa.[7] As a fortified city, the city was of strategic military and political significance. Although a direct Fiefdom of the Holy Roman Emperor, the city obtained a municipal charter; the acquisition of Breda, through marriage, by the house of Nassau ensured that Breda would be at the center of political and social life in the Low Countries. Breda had a population of 180,420 in 2014; the metropolitan area had a population of 324,812.

In the 11th century, Breda was a direct fief of the Holy Roman Emperor,[7] its earliest known lord being Henry of Brunesheim (1080–1125). The city of Breda obtained a municipal charter in 1252. After that Breda had the rights to build fortifications. The city constructed brick walls and Roman-style gates.

The acquisition of the city by the House of Orange-Nassau marked its emergence as a residentiestad (residence city). The presence of the Orange-Nassau family attracted other nobles, who built palatial residences in the old quarters of the city. The most impressive one, built by the Italian architect Thomas Vincidor de Bologna for the first Dutch prince, was the first renaissance-style palace built north of the Alps. In the 15th century the city's physical, economic and strategic importance expanded rapidly. A great church was built in Brabantine Gothic style with a gallant 97-metre-high (318 ft) tower, called Grote Kerk (main church) or also Onze Lieve Vrouwe Kerk (Church of Our Lady). In 1534 Henry III of Nassau-Breda rebuilt the modest medieval fortifications in impressive style. 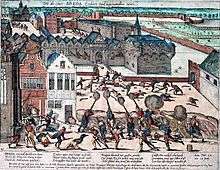 In 1534 a fire destroyed over 90 percent of the city, close to 1300 houses, churches and chapels and the town hall. Only 150 houses and the main church remained. In July 1581, during the Eighty Years' War, Breda was captured by surprise by Spanish troops then under the command of Claudius van Barlaymont, whose sobriquet was Haultpenne (Siege of Breda (1581)). Although the city had surrendered upon the condition that it would not be plundered, the troops vented their fury upon the inhabitants. In the resulting mayhem, known as Haultpenne's Fury, over 500 citizens were killed. In March 1590, Breda fell back into the hands of the Dutch and Maurice of Nassau, when a 68 men hand-picked force, concealed under the turf of a peat-boat, had contrived to enter the city in a daring plan devised by Adriaen van Bergen (Siege of Breda (1590)). The so-called Spaniards Hole marks the spot where the peat-boat allegedly lay, although this has not been historically proven. 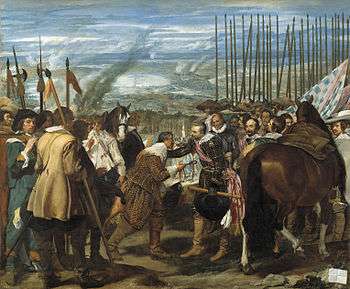 Surrender of Breda, by Diego Velázquez.

After a ten-month siege in 1624–25, the city surrendered to the Spaniards under Spinola; the event was immortalized by Diego Velázquez. In 1637 Breda was recaptured by Frederick Henry of Orange after a four-month siege, and in 1648 it was finally ceded to the Dutch Republic by the Treaty of Westphalia.

The exiled Stuart pretender Charles II of England resided in Breda during most of his exile during the Cromwellian Commonwealth and Protectorate, thanks to the proximity of Charles's sister Mary, Princess Royal, the widow of Prince William II of Orange.

Based mostly on suggestions by Parliamentarian General George Monck, Charles II's Declaration of Breda (1660) made known the conditions of his acceptance of the crown of England which he was to accept/resume later in the same year.

The Treaty of Breda was signed in the city, July 31, 1667, bringing to an end the Second Anglo-Dutch War in which the Dutch faced the same Charles II who had been their guest. Between 1746 and 1748 it was the site of the Congress of Breda a series of talks between Britain and France aimed at bringing an end to the War of the Austrian Succession, which ultimately led to the signing of the Treaty of Aix-la-Chapelle. 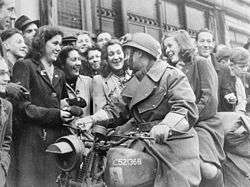 Polish soldiers welcomed by the residents of Breda, 1944

During World War II the city was under German occupation. It was liberated following a successful outflanking manoeuvre planned and performed by forces of 1st Polish Armoured Division of Gen. Maczek on October 29, 1944. Each year during Liberation Day festivities, Breda is visited by a large Polish contingent and the city of Breda reserves a special portion of the festivities for the fallen Polish soldiers. A museum and a monument honoring General Stanisław Maczek and the Polish 1st Armoured Division stands at the city center. General Maczek and soldiers of his division are buried in a nearby Polish military cemetery. 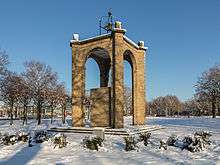 Breda was the site of one of the first panopticon prison establishments, Koepelgevangenis. This prison housed the only German war criminals ever to be imprisoned in the Netherlands for their war crimes during the Second World War. They were known as the 'Breda Four (and later three)' or "Vier von Breda". They were Willy Paul Franz Lages who was released in 1966 due to serious illness, Joseph Johann Kotälla who died in prison in 1979, Ferdinand aus der Fünten and Franz Fischer who both were released in 1989.

The city of Breda is divided in 7 city sectors: 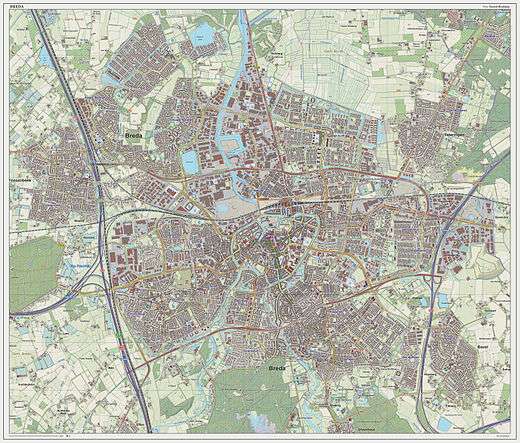 Topographic map image of the city of Breda, March 2014. Click to enlarge. 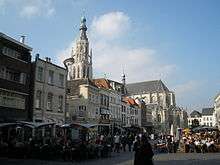 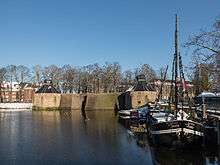 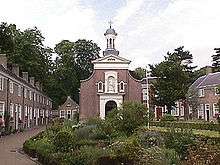 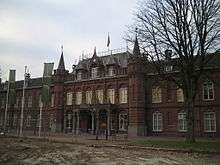 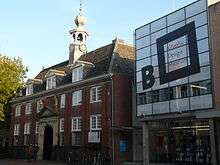 Museum of the Image (MOTI)

Historically, economic activities were mainly industrial. Breda was a center of the food- and drink industry. Companies like Hero (lemonade), Van Melle (Mentos), De Faam (liquorice) and Kwatta (chocolate) are famous throughout Western Europe. Breda also had a sugar factory, supplying its best-known products. BREDA beer is a world-renowned drink that is made in this region.

Also, Breda formerly housed the largest brewery in the Netherlands (Oranjeboom). Interbrew, the Belgian owner of the brewery, closed the brewery in 2004. With the closing of Oranjeboom Brewery, Breda beer production was moved to both Bremen and Leuven, until 2008 when Randalls Brewery (in Guernsey) acquired the licence.[11] Guernsey is now the only place in the world where draught Breda is brewed.[12]

However, the decline of industrial activity did not harm the city's economy. Nowadays, Breda is a service oriented economy based on business, trade and logistics. A growing number of international companies choose to establish their head office for Benelux operations in Breda. Examples of these companies are Abbott Laboratories, General Electric, ExxonMobil, Texaco, Scania, Dockwise, Toshiba, Alfa Laval, Krohne Oil & Gas, General Motors, Ritchie Bros. Auctioneers and Amgen. Also, the food industry is still largely represented by companies such as Hero Group, Perfetti Van Melle, Anheuser-Busch InBev and Royal Cosun. Furthermore, the city is host to the headquarters of the Royal Netherlands Air Force. Because of its central location between the ports of Antwerp and Rotterdam, the city also attracts logistics companies. Koch Media has its Benelux office in Breda.[13]

The city center contains old buildings and portions of the singels (moats) and the harbour. Focal point is the Grote Markt, the main square with pubs and sidewalk cafes.

Park Valkenberg is a major public park, halfway between the main railway station Breda and the Grote Markt.

The spoken language is West Brabantian, which is very similar to colloquial Dutch.

Musical events are held in the Chasse Theater.

Redhead Day is a festival that takes place each first weekend of September. The two-day festival is a gathering of people with natural red hair, but is also focused on art related to the colour red. Activities during the festival are lectures, workshops and demonstrations. The festival attracts attendance from 20 countries and is free due to sponsorship of the local government. Furthermore, some people refer to Breda as the opposite of burning man.

Breda has two railway stations, Breda and Breda-Prinsenbeek, providing connections with Zuid-Holland (Dordrecht – Rotterdam – Den Haag) and Tilburg – Eindhoven, and from station Breda also to Roosendaal with connection to Vlissingen and Antwerp. In addition, trains also head north from Breda to Amsterdam and east to Den Bosch – Nijmegen.

Buses are operated by Arriva. There are four kinds of buses in Breda: citybuses, regional, Volans and long-distance. Citybuses drive only within Breda (sub-12 numbers), regional buses provide connections to nearby towns and cities, Volans buses are more luxurious buses driving to Etten-Leur and Oosterhout (31x and 32x-buses), and long-distance 'Brabantliners' connecting both Gorinchem and Utrecht with Breda (401, 402). There is also one Zealandish busline (19) which connects Breda with Hulst and Antwerp, operated by Connexxion.

See also: List of twin towns and sister cities in the Netherlands

Breda is twinned with: