The Elgin, Joliet and Eastern Railway (reporting mark EJE) was a Class II railroad, operating between Waukegan, Illinois and Gary Indiana. The railroad served as a link between Class I railroads traveling to and from Chicago, although it operated almost entirely within the city's suburbs, and only entered Chicago where it served the U.S. Steel South Works on the shores of Lake Michigan. Nicknames for the railroad included "The J" and "The Chicago Outer Belt Line". At the end of 1970, the EJ&E operated 205 miles of road on 985 miles of track, carrying 848 million ton-miles of revenue freight in that year alone.

On September 26, 2007, the Canadian National Railway announced that it planned to purchase a majority of the EJ&E, leaving a portion of the line in Indiana to be reorganized as the Gary Railway. The purchase was approved on December 24, 2008 by the U.S. Surface Transportation Board, and the deal was consummated effective February 1, 2009.[1] In the years immediately following the merger, the railroad existed as a subsidiary of Canadian National, and EJ&E locomotives that were repainted into CN colors were sub-lettered for the EJ&E.

On December 31, 2012, Canadian National announced that the merger of the EJ&E into Wisconsin Central Ltd. (Another railroad subsidiary of CN) had been completed, and would take effect the following day. On January 1, 2013, the EJ&E effectively ceased to exist, 124 years to the day it was founded.[2]

The EJ&E moved to serve industries in the Hammond-East Chicago-Whiting industrial district by acquiring trackage rights in 1894. However, construction of the present line to Gary, Whiting and South Chicago was initiated in 1899 by the Griffith and Northern Railway. Connections with the Chicago, Lake Shore and Eastern Railway and the Western Indiana Railway further penetrated the district, although the EJ&E subsequently acquired both lines. In 1901, United States Steel Corporation purchased the railroad.

The EJ&E underwent dieselization relatively early. In 1937, the railroad acquired its first diesel-electric locomotive, an EMC SW switcher, which was designated EJ&E #200.[6] Over the next 12 years, the entire steam fleet was replaced with first generation diesels. The first road diesel, Baldwin DT-6-6-2000 #100, was delivered to the railroad in May 1946.[7] The final steam movement occurred in late May 1949, led by a Mikado 2-8-2, EJ&E #740. The locomotive was sold to the scrapper that September.[8]

On May 16, 2006, the EJ&E was the recipient of the 2005 Bronze E. H. Harriman Award for employee safety in group C (line-haul railroads with less than 4 million employee hours per year).[9] 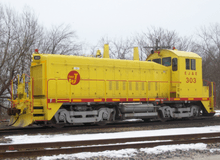 On September 10, 2007, Crain's Chicago Business reported that the Canadian National Railway was in talks to purchase the EJ&E.[10] In 2004, Canadian National had acquired two railroads, the Duluth, Missabe and Iron Range Railroad and the Bessemer and Lake Erie Railroad, that had also previously been owned by Transtar, but that at the time CN acquired them were owned by Great Lakes Transportation, LLC, a Blackstone Group subsidiary created when USS became the sole owner of Transtar). The purchase agreement was officially announced on September 26; CN would purchase the majority of the line. The purchase was initially expected to close in mid-2008, valued at $300 million.

In fact, the closing did not take place until January 31, 2009 (effective February 1, 2009), following regulatory approval of the purchase by the Surface Transportation Board on December 24, 2008.[11][12][13] Canadian National plans to use the EJ&E to route trains around Chicago, where they now face lengthy delays because of congestion in the busy rail hub.

In accordance with its agreement with CN, Transtar retained some railroad infrastructure in Gary, Indiana; this infrastructure has been reorganized as the Gary Railway to continue serving U.S. Steel's plants located there.[14][15]

On Tuesday, March 10, 2009, the first two Canadian National trains debuted on the Elgin, Joliet, & Eastern, with plans to run six trains per day on the lines in the near future.[16]

The EJ&E's all time diesel roster consisted of:[17]

Locomotive designations in bold indicate that these models were on the roster at the time of the railroad's sale to the Canadian National Railway.

The EJ&E connects the following cities and large towns: