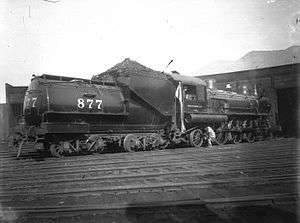 The Oregon Short Line Railway was organized on April 14, 1881. The line started from the Union Pacific main line in Granger, Wyoming, and reached Montpelier, Idaho, on August 5, 1882 and then to McCammon, Idaho, in the Fall of 1882. Between McCammon and Pocatello the line was shared with fellow Union Pacific subsidiary Utah & Northern's grade by adding a third rail to the 3 ft (914 mm) narrow gauge track to accommodate the 4 ft 8 1⁄2 in (1,435 mm) standard gauge cars. The line from Pocatello to Huntington, Oregon, was completed in late 1884.[1] Access to Portland, Oregon, was on track leased from the Oregon Railway and Navigation Company.[2] 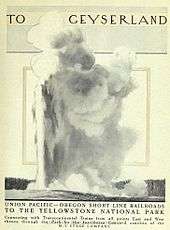 Cover of To Geyserland, an Oregon Short Line Railroad brochure.

In 1889, the Oregon Short Line Railway merged with Utah & Northern Railway and 6 other smaller railroads to form the Oregon Short Line and Utah Northern Railway. In 1890 the company finished converting the original Utah & Northern line from 3 ft (914 mm) narrow gauge to 4 ft 8 1⁄2 in (1,435 mm) standard gauge, a process that U&N had started as early as 1885. On October 13, 1893 the OSL&UN went into receivership with the rest of the Union Pacific holdings. The Oregon Short Line Railroad was incorporated in February 1897 and purchased the property of the OSL&UN later that month. On March 15 the OSL took possession of the line and started operating.

The OSL was independent for a short period of time until October 1898 when the newly reformed Union Pacific Railroad took control of a majority of the board of directors. During the early part of the 20th century the railroad publicized tours of Yellowstone National Park by way of a spur constructed from Idaho Falls, Idaho to West Yellowstone, Montana.

In 1938, Union Pacific began consolidating operations and leased for operation a number of its subsidiaries including the Oregon Short Line. The railroad operated under the lease until December 30, 1987, when the OSL was fully merged into the Union Pacific Railroad.