The Santa Fe, Prescott and Phoenix Railway (SFP&P) was a common carrier railroad that later became an operating subsidiary of the Atchison, Topeka and Santa Fe Railway in Arizona. At Ash Fork, Arizona, the SFP&P connected with Santa Fe's operating subsidiary, the Atlantic & Pacific Railroad mainline, that ran from California to Chicago. The SFP&P's 195-mile (314 km) line extended the Santa Fe Railway south into Phoenix. The SFP&P extended another 100 miles (160 km) to the east from Phoenix to Florence and Winkelman via the Phoenix and Eastern Railroad (which would become a Southern Pacific Railroad subsidiary in 1907). The SFP&P also served several mines in the Prescott area through its various subsidiary railroads. 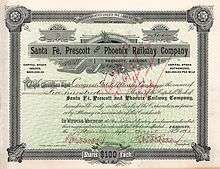 Share of the Santa Fe, Presott & Phoenix Railway Company from the 15. April 1893

On June 30, 1899, the SFP&P began operating the Prescott and Eastern Railroad that ran between Entro (near Prescott) to Mayer. In 1901–02 the SFP&P also operated its subsidiary the Bradshaw Mountain Railroad.

On November 1, 1905, the SFP&P began operating the Arizona & California Railway that ran from a connection with the Santa Fe Railway in the Mojave Desert at Cadiz, California, to a connection with SFP&P at Matthie, Arizona, (located between Prescott and Wickenburg). By the end of 1909 the Arizona & California was an operating subsidiary of the SFP&P, using 3 4-6-0 locomotives made by Brooks Locomotive Works.

The SFP&P also had six Brooks Locomotive Works 2-8-0 (also known as a Consolidation) steam locomotives built between 1904-1906. These locomotives would be renumbered ATSF #2439-2444.