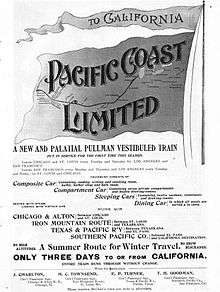 An 1898 ad for the Pacific Coast Limited, which the railway operated jointly with the Chicago and Alton Railroad, Texas and Pacific Railway, and Southern Pacific Railroad.

The St. Louis, Iron Mountain and Southern Railway was a historic railroad that operated in Missouri, and Arkansas during the late 19th and early 20th centuries.

It ran from St. Louis, Missouri, to Texarkana, Arkansas, as well as to southeast Missouri. The line was initially established to deliver iron ore from Iron Mountain, Missouri to St. Louis. The company was frequently referred to as the St. Louis Iron Mountain & Southern (StLIM&S) or shortened to simply the Iron Mountain Railway.

The railroad is famous for giving its name to the Iron Mountain Baby, and the railroad is reported to have paid for the child's education.

The name has been resurrected by a modern short line railroad based in Jackson, Missouri. The St. Louis, Iron Mountain and Southern Railway operates a heritage railroad in Cape Girardeau County, Missouri.