The Pennsylvania Company was incorporated April 7, 1870 in Pennsylvania as a holding company with a broad charter. It was organized June 1, with president William Thaw of the PRR. Tom Scott replaced Thaw as the president January 20, 1871. On April 1 of that year the company began operating several railroads; others were acquired later. 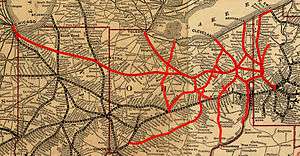 The Pennsylvania Company operated the Erie Canal of Pennsylvania from September 16, 1870 to February 4, 1871.

On January 1, 1918, soon after the United States Railroad Administration took over all U.S. railroads, all Pennsylvania Company leases were transferred to the PRR. On March 1, 1920, when the lines were returned to the PRR, they were separated into four regions - the Eastern Region, Central Region, Northwestern Region and Southwestern Region.

The Pennsylvania Company however stayed around as a holding company, and was reincorporated in Delaware on December 12, 1958 and reorganized December 16. Its new purpose was to diversify into real estate and other fields, and the company lasted through the 1968 PRR merger into Penn Central Transportation.

In 1973 or 1974 several subsidiaries were created - the Pennrec Company for theme park investments (including Six Flags Great Adventure and Stars Hall of Fame), the Penn Orlando Company, and Penn Arlington, Inc. (which bought Six Flags Over Texas from the Great Southwest Corporation).