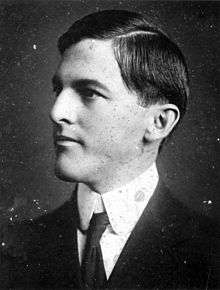 Emmett Wilson (December 8, 1882 – July 27, 1918) was a United States Representative from Florida. He was the grandson of Augustus Emmett Maxwell. Wilson was born during the temporary residence of his parents at Belize City, British Honduras.

Wilson moved with his parents to Chipley, Florida where he attended the public schools and Florida State College at Tallahassee, Florida. He was employed as a railroad telegrapher and later as a stenographer and was graduated from the law department of the Stetson University at DeLand in 1904. Admitted to the bar the same year, he commenced practice in Marianna, Florida. He later moved to Pensacola, Florida in 1906 and continued the practice of law.

Wilson was appointed assistant United States attorney for the northern district of Florida February 1, 1907, and United States attorney for the same district October 7, 1907. He held the position until March 1909. He was the state’s attorney for the first judicial circuit of Florida 1911-1913 and was elected as a Democrat to the Sixty-third and Sixty-fourth Congresses (March 4, 1913 – March 3, 1917). He was an unsuccessful candidate for renomination in 1916. After leaving Congress, he resumed the practice of law in Pensacola, Florida and died there in 1918. He was buried in St. John’s Cemetery.