Mario Rafael Díaz-Balart Caballero (born September 25, 1961) is a Republican U.S. Representative from Florida. He has represented a district in the Miami area since 2003, currently numbered as the 25th district. His current district includes much of southwestern Miami-Dade County, including the city of Hialeah, as well as much of the northern portion of the Everglades.

He attended the University of South Florida to study political science before beginning his public service career as an aide to then-Miami Mayor Xavier Suárez in 1985. In the same year, he changed his political party affiliation from Democratic to Republican.[1] 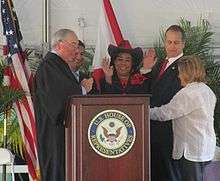 Díaz-Balart gave up his seat in the state house to run in the newly created 25th District, which included most of western Miami-Dade County, part of Collier County and the mainland portion of Monroe County. It was widely believed that he had drawn this district for himself, given that he was chairman of the state house redistricting committee. He easily won the seat with 64 percent of the vote. He was unopposed for reelection in 2004, and won a third term with 58 percent of the vote in 2006.

In 2008, however, Díaz-Balart faced his strongest challenge to date in Joe García, former Executive Director of the Cuban American National Foundation and former chairman of the Miami-Dade County Democratic Party. Despite the perception that Díaz-Balart had drawn the district for himself, it was actually fairly marginal on paper, with a Cook Partisan Voting Index of R+4. Ultimately, Díaz-Balart defeated Garcia with 53 percent of the vote.

On February 11, 2010, Díaz-Balart announced his intention to seek election in Florida's 21st congressional district—being vacated by his brother, Rep. Lincoln Díaz-Balart—rather than the 25th district.[2] Unlike the 25th, the 21st has long been considered the most Republican district in the Miami area.

No other party even put up a candidate when filing closed on April 30, handing the seat to Mario Diaz-Balart.[3]

Díaz-Balart was reelected unopposed in 2012 in the renumbered 25th district. Indeed, since this district's creation in 1993 (it was numbered as the 21st from 1993 to 2013), the Republican candidate has run unopposed in all but two elections.

Díaz-Balart's voting record is moderate to conservative. For his first two terms in Congress, Díaz-Balart was a member of the conservative Republican Study Committee.

He is a founding member of the Congressional Hispanic Conference, a caucus of Hispanic Republican congressmen. Like his Cuban-American colleagues in both the Senate and the House of Representatives, Díaz-Balart is a strong advocate of maintaining the Cuban embargo, saying "Some people do not understand the embargo of Cuba. Its purpose is to keep American hard currency out of the hands of a Communist thug by restricting most trade and travel."[4]

On September 29, 2008, Díaz-Balart voted against the Emergency Economic Stabilization Act of 2008[5]

He currently lives in Miami with his wife Tia and son Cristian Rafael.[6]