Jefferson Bingham "Jeff" Miller (born June 27, 1959) is the U.S. Representative for Florida's 1st congressional district, serving since 2001. He is a member of the Republican Party. The district includes all of Escambia, Santa Rosa, Okaloosa, Walton, Holmes, and Washington Counties.

Miller was born in St. Petersburg, Florida. After graduating from Bronson High School in 1977, he served for one year under the National FFA Organization as Florida state Secretary. Miller went on to receive a Bachelor of Arts in Journalism[1] from the University of Florida in 1984.[2] He was a real estate broker and a deputy sheriff before taking public office.[3]

Miller lives in the small town of Chumuckla, Florida (Native American word for "Healing Waters"), which is located about 20 miles northeast of Pensacola, Florida. He and his wife Vicki have two children and four grandchildren and are members of Olive Baptist Church.

Miller was an executive assistant to Democratic state Agriculture Commissioner Doyle Conner from 1984 to 1988. He was a Democrat until he switched parties in 1997.[4]

Miller was a member of the Florida House of Representatives from 1998 to 2001.[2] During his three years there, he was a member of the committees on Utilities & Telecommunications, Congressional Redistricting, Council for Ready Infrastructure, and Rules, Ethics & Elections. During his second term in the state house, Miller was chairman of the Utilities of Telecommunications Committee. He also oversaw a board in charge of community development in Escambia County. 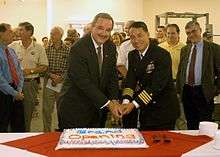 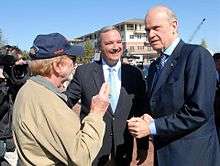 Miller announced that he will not seek reelection during the 2016 elections.[5]

During the 108th Congress, he served on the House Armed Services Committee (Subcommittee on Readiness[7] and the Subcommittee on Terrorism, Unconventional Threats and Capabilities[7]) and the Committee on Veterans’ Affairs.[8]

Jeff Miller will retire from the US House of Representatives on January 3, 2017. He is currently being considered for a position in President-Elect Donald Trump's Cabinet, with Secretary of Veterans Affairs being most likely.

This is a partial list of legislation sponsored by Miller.