Richard B. "Rich" Nugent (born May 26, 1951) is the U.S. Representative for Florida's 11th congressional district. He is a member of the Republican Party. He used to be the Sheriff of Hernando County, Florida. On November 2, 2010 Richard Nugent defeated Democratic nominee James Piccillo, to replace retiring Congresswoman Ginny Brown-Waite. Nugent is a member of the Tea Party Caucus. On November 2, 2015, Nugent announced that he will leave Congress at the end of his term (January 3, 2017).[3]

After high school Nugent joined the Illinois Air National Guard for six years. He then continued serving as a police officer in the city of Romeoville, Illinois.[7] After serving as a police officer in Romeoville for 12 years, Nugent and his family moved to Hernando County, Florida in 1984, where he joined the Hernando County Sheriff's office as a deputy.[7] 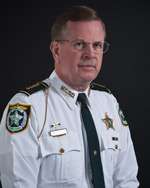 Republican Congresswoman Ginny Brown-Waite decided not to run for re-election in the 5th Congressional District of Florida, due to health concerns. She asked Nugent to run for her seat.[15] Nugent won the Republican primary and was endorsed during his campaign by former Governor of Arkansas Mike Huckabee,[16][17] and by several Florida newspapers, including the Orlando Sentinel, Tampa Bay Times, and the Tampa Tribune.[18]

Nugent beat Tea Party favorite Jason Sager in the primary and won against Democrat Jim Piccillo in the general election. The New York Times had rated this race as solidly Republican.[19] The Ocala online newspaper reported that In the 5th Congressional District, Nugent swept past Democrat Jim Piccillo, a political newcomer from Lutz, receiving 67 percent of the vote to 33 percent.[20]

Nugent is against what he terms out of control spending presently happening in Washington. He opposed the $700 billion bailout by President George W. Bush, a temporary fix for de-regulation of the banking and finance industries, two unfunded Bush-era wars, and a decades-long wage decrease. He also opposed the Obama Administration's $862 billion stimulus package.

Nugent signed on as a co-sponsor of H.R. 25, better known as "The Fair Tax". This legislation introduced by Rep. Rob Woodall (R-GA) would abolish the Internal Revenue Service (IRS), repeal the federal income tax, and replace it with a transparent tax on consumption.[22]

In 2010 Nugent signed a pledge sponsored by Americans for Prosperity promising to vote against any Global Warming legislation that would raise taxes.[23]

Nugent opposed the passage of President Barack Obama's health care legislation and has vowed to work for its repeal. He has stated that he is open to listening to anybody's plan to save and reform Medicare so long as benefits are completely unchanged for those 55 and up.[24]

Nugent serves on the Committee on House Administration.[25] Nugent formerly served on the House Committee on Rules .[26] In January 2015, Nugent was removed from that committee, in an apparent retribution for voting against John Boehner as House Speaker.[27]

In 1975, Rich married Wendy Nugent and they have three boys. The Nugent family have been members of the First United Methodist Church of Spring Hill since 1985.

On November 2, 2015, Nugent announced that he would leave Congress at the end of his term on January 3, 2017.[31] Among the reasons given for leaving office, Nugent cited a desire to spend more time with family: “After five years of living out of a suitcase, saying goodbye almost weekly to my beloved wife, and seeing pictures of the grandkids instead of spending more of that quality time with them, the tug of being apart from family has just become too great."[32]