For other people with the name, see Joe Hernandez (disambiguation). 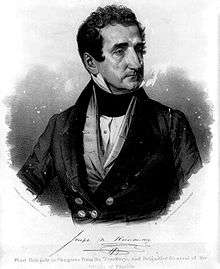 José Mariano Hernández or Joseph Marion Hernández (May 26, 1788[1] – June 8, 1857) was an American politician, plantation owner, and soldier. He was the first Delegate from the Florida Territory and the first Hispanic American to serve in the United States Congress.[2] A member of the Whig Party, he served from September 1822 to March 1823.

Hernández was born in St. Augustine, Florida during Florida's second Spanish period. His parents were Minorcans who had originally come to the region as indentured servants in Andrew Turnbull's New Smyrna colony. Prior to the American acquisition of Florida, Hernández owned three plantations south of St. Augustine (in what was then East Florida):[3] San Jose, Mala Compra, and Bella Vista, the last of which is now Washington Oaks State Gardens.

When Spain ceded the Floridas to the United States in the Adams–Onís Treaty in 1822, Hernández pledged his allegiance to the U.S. After the organization of the Florida Territory later that year, he was elected Florida's first Delegate to the United States House of Representatives, and was approved by President James Monroe on September 30, 1822. He thus became the first Hispanic ever to serve in the U.S. Congress.[4] He served for six months, leaving office on March 3, 1823.[4]

Hernández later served in the Territorial House of Representatives, the predecessor to the Florida House of Representatives, in which he was the presiding officer.[4] He continued running his plantations, which were burned by the Seminoles in the Second Seminole War. The ruins of one of these plantations, Mala Compra, is today a preserved archaeological site. He was appointed Brigadier General over a troop of volunteers during the war and was subsequently commissioned in the United States Army, serving from 1835 to 1838. Hernández was the commanding officer responsible for the imprisonment of the Seminole leader Osceola upon the orders of General Thomas Jesup, as well as the capture of Seminole chiefs Ee-mat-la (King Philip) and Seminole ally Uchee Billy. He retired with the rank of Brigadier General.[4]

In 1837, while with the U.S. Army, Hernández was ordered to build a road between St. Augustine, Florida and Fort Capron, located near present-day Fort Pierce, Florida, on the St. Lucie River. He directed the blazing and clearing of the route that, 12 years earlier, Col. James Gadsden had cleared along the Atlantic Coastal Ridge to the St. Lucie River. It passed from Fort Capron through Fort Vinton, Fort Drum, Fort Kissimmee, Fort Meade to Fort Brooke (Tampa).