For other uses, see Energy economics (disambiguation).
Not to be confused with Ecological economics, Environmental economics, Natural resource economics, or Thermoeconomics.

Some institutions of higher education (universities) recognise energy economics as a viable career opportunity, offering this as a curriculum. The University of Cambridge, Massachusetts Institute of Technology and the Vrije Universiteit Amsterdam are the top three research universities, and Resources for the Future the top research institute.[2] There are numerous other research departments, companies and professionals offering energy economics studies and consultations. 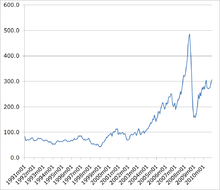 Energy related issues have been actively present in economic literature since the 1973 oil crisis, but have their roots much further back in the history. As early as 1865, W.S. Jevons expressed his concern about the eventual depletion of coal resources in his book The Coal Question.[3][4] One of the best known early attempts to work on the economics of exhaustible resources (incl. fossil fuel) was made by H. Hotelling, who derived a price path for non-renewable resources, known as Hotelling's rule.[5]

Leading journals of energy economics include:

There are several other journals that regularly publish papers in energy economics:

There is also a handbook in three volumes.

IDEAS/RePEc has a collection of recent working papers.