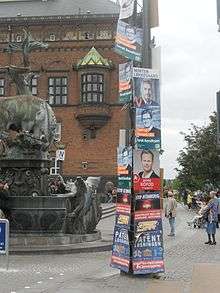 Electoral posters in Copenhagen in May 2014, for the European election. Posters for the Social Democrats, Conservatives, and Venstre appear here. The posters at the bottom relate to the referendum on a Unified Patent Court. On a lamppost in the background of the image, a poster for the People's Movement against the EU is also visible.

All parties in the Folketing except the Red–Green Alliance participated in the election. In addition, the People's Movement against the EU participated. Several parties had incumbent candidates as lead candidates: Bendt Bendtsen for the Conservative People's Party,[2] Margrete Auken for the Socialist People's Party (Denmark) and Morten Messerschmidt for the Danish People's Party. Three of the parties represented in the EP had new lead candidates: Jeppe Kofod for the Social Democrats[3]Ulla Tørnæs for Venstre and Rina Ronja Kari for the People's Movement against the EU.[4] The Danish Social Liberal Party which was not represented in the EP had Morten Helveg Petersen on top of the list[5] while the Liberal Alliance which similarly was not represented had Christina Egelund.[6]

After the Danish People's Party and the Red–Green Alliance opposed Danish membership in the Unified Patent Court, the Danish cabinet in December 2013 decided to hold a referendum on the issue, since joining the court was judicially regarded as transferring sovereignty and would have required five-sixths majority in the parliament in order to be approved without a referendum.[7]

A central theme in the campaign was the claim of benefit tourism as a threat to the Danish welfare state, a position the Danish People's Party fronted and which was partly supported by Venstre, the Conservatives and the Social Democrats.[8] The Social Liberal Party took the most positive position towards free movement of people inside the EU and was supported by Danish businesses.[9]

On 12 May 2014, Ekstrabladet wrote that Venstre's leader Lars Løkke Rasmussen had received about 150,000 Danish kroner in economic support for clothing in his period as prime minister 2009–2011. Later in the campaign media wrote that Rasmussen and his wife had received a free holiday to Mallorca at the party's expense.[10] The revelations led to a drop in support for Venstre in the polls.[9] Rasmussen later stated the claims were exaggerated.[10]

As part of an effort to motivate young people to take part in the election, the Folketing published a video on YouTube featuring a muscle-bound cartoon figure called "Voteman" who had once failed to vote and later regretted his resulting loss of influence, so he decided to force everyone to vote in elections. He is seen in the video engaging in group sex, and dispensing violence including decapitation, described as "grindhouse"-style by The Guardian's Lars Eriksen.[11] The video was controversial in Denmark and abroad, being criticised for being misogynist and featuring violence while being praised as humorous by others. The Folketing pulled the video a day after its release, with speaker of the Folketing, Mogens Lykketoft, saying the cartoon had been perceived as "more serious and offensive" than intended.[11][12]

Winner of the election was the Danish People's Party which for the first time became the largest party in a nationwide election, obtaining 26.61% of the votes and four of the thirteen seats. The party was largest in 71 of 92 electoral districts with a particular strong performance in Lolland and Southern Jutland, while doing less well in the urban areas of Copenhagen and Århus.[13]

Venstre also lost a seat, getting two seats with 16.7% of the votes, while the Social Liberal Party won back a seat they lost in the previous election.[9]

Voter turnout was 56.4% which was lower than in 2009, but still the second highest ever for a Danish election to the European Parliament.[14]

Morten Messerschmidt from the Danish People's Party got 465,758 preference votes, the highest ever for a Danish politician in an election to the EP.[15]

Further information: List of members of the European Parliament, 2014–19

The seats were given out within the parties to the candidates who received the preference votes.

People's Movement Against the EU

With about one third of the votes for Eurosceptic parties, the election was regarded by political commentators as strengthening this position, with a possibility that also the Europositive parties would become more critical to certain EU policies, such as sending welfare checks abroad.[18] The support in the referendum of Denmark being part of Unified Patent Court was on the other side seen as evidence that a majority of Danes still favoured giving the EU more influence in certain areas.[18]

Political commentators saw the good result for the Danish People's Party as also reflecting that the party since Kristian Thulesen Dahl became leader in 2012 has become less controversial and has put more focus on welfare issues.[19][20] At the same time, some of the votes for the party were considered to be protest votes in relation to EU matters and not believed to transfer into votes for the party in the next Danish general election.[19]

The Social Liberal Party was regarded as another winner, winning a seat which they lost in the prior election.[18]

The result was also seen as positive for the Socialist People's Party and the Conservative People's Party which polled low at the start of the campaign but managed to keep their respective seats.[18]

The bad result for Venstre was seen as partly a result of the debate over Lars Røkke Rasmussen's clothing and holiday expenses[8] and led to a discussion in the party about his positions with several local party groups and individual politicians requesting that he resigned. After a special meeting on 3 June, the party concluded that he still had the party's trust and would continue as party leader and candidate for prime minister.[21]

Internationally the election result was seen as part of a wider trend of electoral gain for eurosceptic and far right parties in the election.[22]

On 4 June, the Danish People's Party was admitted into the European Conservatives and Reformists group in the EP, thus leaving the Europe of Freedom and Democracy group.[23]