Fort Pulaski National Monument is located on Cockspur Island between Savannah and Tybee Island, Georgia. It preserves Fort Pulaski, where in 1862 during the American Civil War, the Union Army successfully tested rifled cannon in combat, the success of which rendered brick fortifications obsolete. The fort was also used as a prisoner-of-war camp. The National Monument includes most of Cockspur Island (containing the fort) and all of adjacent McQueens Island.

Following the War of 1812, U.S. President James Madison ordered a new system of coastal fortifications to protect the United States against foreign invasion. Construction of a fort to protect the port of Savannah began in 1829 under the direction of Major General Babcock, and later Second Lieutenant Robert E. Lee, a recent graduate of West Point. The new fort would be located on Cockspur Island at the mouth of the Savannah River. In 1833, the facility was named Fort Pulaski in honor of Kazimierz Pulaski, a Polish soldier and military commander who fought in the American Revolution under the command of George Washington. Pulaski was a noted cavalryman and played a large role in training Revolutionary troops. He took part in the sieges of Charleston and of Savannah.

Fort Pulaski belonged to what is known as the Third System of coastal fortifications, which were characterized by greater structural durability than the earlier works. Most of the nearly thirty Third System forts built after 1816 still exist along either the Atlantic or Gulf coasts.[4]

Wooden pilings were sunk up to 70 feet (21.3 m) into the mud to support an estimated 25,000,000 bricks. Fort Pulaski was finally completed in 1847 following eighteen years of construction and nearly $1 million in construction costs.

Walls were eleven feet thick, thought to be impenetrable except by only the largest land artillery- which at the time were smooth bore cannon. These cannons had a range of only around a half mile, and the nearest land (Tybee island) was much further away than that. It was assumed that the Fort would be invincible to enemy attack. LT Lee remarked that "one might as well bombard the Rocky Mountains as Fort Pulaski". 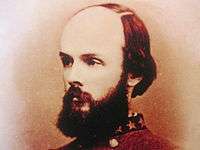 Though completed in 1847, Fort Pulaski was under the control of only two caretakers until 1860 when South Carolina seceded from the United States and set in motion the Civil War. It was at this time that Georgia governor Joseph E. Brown ordered Fort Pulaski to be taken by the state of Georgia. A steamship carrying 110 men from Savannah traveled downriver and the fort was seized by the state of Georgia. Following the secession of Georgia in February 1861, the state joined the Confederate States of America. Confederate troops then moved into the fort.

By December 1861, Tybee Island was thought to be too isolated and unprepared for conflict and was abandoned by Confederate forces. This allowed Union troops to gain a foothold across the Savannah River from Fort Pulaski. Union forces under Quincy A. Gillmore began construction of batteries along the beaches of Tybee.

Siege and reduction of Fort Pulaski 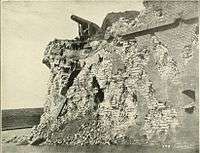 Wall that was breached and repaired with moat around the fort

On the morning of April 10, 1862 Union forces asked for the surrender of the Fort to prevent needless loss of life. Colonel Charles H. Olmstead, commander of the Confederate garrison, rejected the offer.

Fort Pulaski was prepared for a possible infantry attack. However, it never endured a direct land assault. Using 36 guns, including the new James Rifled Cannon and Parrott rifles, Union troops began the long sustained bombardment of Fort Pulaski. The rifled projectiles could be accurately fired farther (4–5 miles) than the larger and heavier smoothbore cannonballs. Within 30 hours, the new rifled cannon had breached one of the fort's corner walls. Shells now passed through the fort dangerously close to the main powder magazine. Reluctantly, Colonel Olmstead surrendered the fort. Only two soldiers, one Confederate and one Union, were injured in the attack. Olmstead's decision to surrender haunted him for decades.

We were absolutely isolated beyond any possibility of help from the Confederate authorities, and I did not feel warranted in exposing the garrison to the hazard of the blowing up of our main magazine -- a danger which had just been proved well within the limits of probability. ... There are times when a soldier must hold his position to the last extremity, which means extermination, but this was not one of them. ... That the fort could and would be absolutely destroyed by the force of the enemy was a demonstrated fact, ... while our own power to harm them had been reduced to a minimum, ... I am still convinced that there was nothing else that could be done.[4]

Gillmore succeeded almost entirely because of his rifled cannon, which caused massive damage in the walls of the fort. Gillmore's triumph won him promotion from engineer captain to brigadier general.[4] 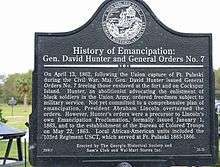 Historical marker about General Orders No. 7

Within six weeks of the surrender, Union forces repaired the Fort and all shipping in and out of Savannah ceased. The loss of Savannah as a viable Confederate port crippled the Southern war effort. With the Fort securely in Union control, General David Hunter, commander of the Union garrison issued General Order Number Eleven, which stated that all slaves in Florida, Georgia, and South Carolina were now free. President Abraham Lincoln quickly rescinded the order, but later issued his own Emancipation Proclamation in 1863. At this time, Fort Pulaski was made a final destination on the Underground Railroad as slaves throughout the area were freed upon arrival on Cockspur Island.

The garrison of Union soldiers reached 600 during the initial occupation, but as the War dragged on it became obvious the Southern forces would not be able to retake the fort. The garrison was later reduced to about 250. Late in the war, the fort was turned into a prison for a group of captured Confederate officers known as "The Immortal Six Hundred." Thirteen of these men would die at the fort. After the war ended, Fort Pulaski continued as a military and political prison for a short while. It would house a Confederate Secretary of State, Secretary of the Treasury, Secretary of War, Assistant Secretary of War as well as three state governors, a senator and the men who had commanded the fort after it had been taken by the South. 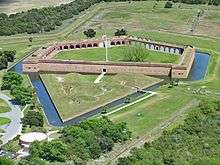 Aerial view of the fort

Between 1869 and 1872 the demilune to the rear of the Fort was covered with powder magazines and the few gun positions left were enlarged for heavier guns.

By the turn of the 20th century, the fort began to fall into disrepair. In an effort to save the old fort, the War Department finally declared Fort Pulaski a National Monument on October 15, 1924 by presidential proclamation of Calvin Coolidge. The monument was transferred from the War Department to the National Park Service on August 10, 1933. At that time repairs were started, when members of the Civilian Conservation Corps arrived on Cockspur Island and began rehabilitation of the fort.

Fort Pulaski was opened to the public only for a short time before the beginning of World War II. This war would see further use of Cockspur Island as a section base for the U.S. Navy. Following World War II, Fort Pulaski reverted to the Park Service's control, and it was administratively listed on the National Register of Historic Places on October 15, 1966. Fort Pulaski remains open to the public, with a museum opened in the 1980s.

In November 2009, Fort Pulaski was used in the filming of Robert Redford's movie The Conspirator, based on the conspiracy involving the assassination of President Abraham Lincoln, most notably as the site for the gallows used to hang Mary Surratt and others.

It was used once again in filming the 2012 horror film Abraham Lincoln vs. Zombies. It was chosen for location shooting of scenes where Lincoln confronts zombies who had overrun a Confederate stronghold.