Yucca House National Monument is located in the Montezuma Valley at the foot of Sleeping Ute Mountain, called "mountain with lots of yucca growing on it" by the Ute people, and inspiration for the name of the national monument.[2]

Nearby were the ancient pueblo village of Mud Springs at the head of McElmo Canyon[4] and Navajo Springs, was the original site of the Ute Mountain Indian Agency south of Sleeping Ute Mountain in the early 1900s.[6]

Like other nearby Ancient Pueblo peoples, the Yucca House pueblo dwellers abandoned their homes, but because a major excavation has not been completed it is not known when, or if there is a relationship between these people and those of nearby pueblo settlements.[2]

The following archaeological studies were conducted:[2][7]

Holmes reports: "These ruins form the most imposing pile of masonry yet found in Colorado. The whole group covers an area of about 480,00 square feet, and has an average depth of from 3 to 4 feet. [...] The stone used is chiefly of the fossiliferous limestone that outcrops along the base of the Mesa Verde a mile or so away." 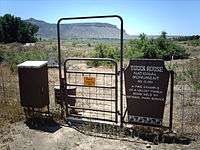 President Woodrow Wilson proclaimed the site a National Monument on December 19, 1919, after the donation of 9.5 acres (38,000 m2) of land on July 2, 1919 by a private landowner. An additional 24 acres was donated by Hallie Ismay in the late 1990s. It was one of many research national monuments designated during that era to preserve the ruins, plants and animals in the Yucca House area.[3] Hallie Ismay, benefactor of the additional land in the 1990s, was an unofficial steward of the Yucca House site for 62 years.[2]

As a National Park Service historic area, the park was administratively listed on the National Register of Historic Places on October 15, 1966. The site is managed by Mesa Verde National Park.

Currently, there are no true interpretive features, facilities or fees at Yucca House. See the Visitor Guide for directions to the remote location. Parking space is limited and roads may be difficult immediately following rains or snowmelt. [2]

Other cultures in the Four Corners region