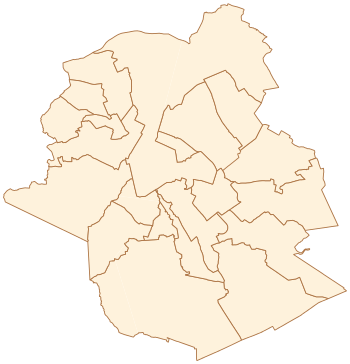 The 19 municipalities of the Brussels-Capital Region[1][2] (French: Région de Bruxelles-Capitale, Dutch: Brussels Hoofdstedelijk Gewest) are the political subdivisions of Belgium's central region.[3] The government of each municipality is responsible for the handling of local level duties, such as law enforcement and the upkeep of schools and roads within its borders.[4] Municipal administration is also conducted by a mayor, a council, and an executive.[4]

The largest and most populous of the municipalities is the City of Brussels, covering 32.6 square kilometres (12.6 sq mi) with 178,552 inhabitants. The least populous is Koekelberg with 21,638 inhabitants, while the smallest in area is Saint-Josse-ten-Noode which is only 1.1 square kilometres (0.4 sq mi). The latter also has the highest population density of the 19 with 24,911 inhabitants per km².

The names of the municipalities are given in the two official languages of the Brussels-Capital Region: French and Dutch. The numbers in the "#" row refer to the map above.