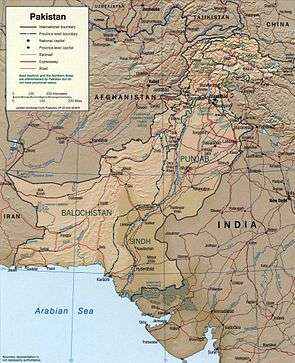 The Government of Pakistan (Urdu: حکومتِ پاکستان‎) is a federal government established by the Constitution of Pakistan as a constituted governing authority of the four provinces of a proclaimed and established parliamentary democratic republic, constitutionally called the Islamic Republic of Pakistan.[1]

Effecting the Westminster system for governing the state, the government is mainly composed of the executive, legislative, and judicial branches, in which all powers are vested by the Constitution in the Parliament, the Prime Minister and the Supreme Court.[2] The powers and duties of these branches are further defined by acts and amendments of the Parliament, including the creation of executive institutions, departments and courts inferior to the Supreme Court.[2] By constitutional powers, the President promulgates ordinances and passes bills. The President acts as the ceremonial figurehead while the people-elected Prime Minister acts as the chief executive (of the executive branch) and is responsible for running the federal government. There is a bicameral Parliament with the National Assembly as a lower house and the Senate as an upper house. The judicial branch systematically contains an apex Supreme Court, high courts of four provinces, district, anti-terrorism, Sharia, and the green courts; all inferior to the Supreme Court.[2]

The basic civil and criminal laws governing the citizens of Pakistan are set down in major parliamentary legislation (a term inherited from the United Kingdom), such as the Exit Control List, the Pakistan Penal Code, and the Frontier Crimes Regulations. By the Article 246th and Article 247th to the constitution, the Islamic Jirga (or Panchayat) system has become an institution for local governance.[4][5] The 1950s reforms in the government administration, the constitutional law and jurisprudence in Pakistan have been greatly influenced by the United States' legal system. Since the 1970s, the traditional jirga-based law has also influenced the country's judicial development.[6]

The legislative branch is known as the parliament, a term for legislature inherited from the United Kingdom. The parliament has two houses;

By general definition, the executive branch of government is the one that has sole authority and responsibility for the daily administration of the state bureaucracy. The division of power into separate branches of government is central to the republican idea of the separation of powers. The separation of powers system is designed to distribute authority away from the executive branch – an attempt to preserve individual liberty in response to tyrannical leadership throughout history.

The Prime Minister of Pakistan (Urdu: وزيراعظم; lit: 'Wazir-e- Azam), is the executive head of government of Pakistan, constitutionally designated as the Chief Executive (CE).[7] Popularly elected by direct elections in the parliament, the Prime minister is responsible for appointing a cabinet as well as running the government operations.[7]

The Prime Minister duly appoints the directors, executives, chairmen in almost all state institutions and corporations, including;

The Cabinet can have a maximum of 11 percent (50 members including the Prime Minister) of the total strength of the Parliament.[8] Each Cabinet member must be a member of Parliament (MP).[9] The Cabinet Ministers chair the Cabinet and are further assisted by the Cabinet Secretary, whose appointment comes from the Civil Services of Pakistan. Other Ministers are Ministers of State, junior members who report directly to one of the Cabinet Ministers, often overseeing a specific aspect of government.[9]

Once appointed by the Prime Minister, all Cabinet Ministers are officially confirmed to their appointment offices by the President in a special oath of ceremony.[9]

The President of Pakistan is a ceremonial figurehead, a ceremonial head of state representing the unity of the country.

Elected for a five-year term by an indirect election, the electoral college consisting of members of the Senate, National Assembly and the four provincial assemblies, the president is eligible for reelection.[9] However no individual may hold the office for more than two consecutive terms. The president may resign or be impeached and removed from office for incapacity or gross misconduct by a two-thirds vote of the members of the parliament.[9]

The President enjoys all constitutional powers and exercises them directly or through officers subordinate to him as per the aforesaid Article 41-Article 47.[10]

The President is responsible for making a wide variety of appointments.[10]

The President is the civilian Commander in Chief of the Pakistan Armed Forces.[11]

The President of Pakistan can grant a pardon to or reduce the sentence, reprieve and respite, and remit, suspend or commute any sentence passed by any court, tribunal or other authority, particularly in cases involving a death sentence.[10] The decisions involving pardoning and other rights by the President are independent of the opinion of the Prime Minister or the Parliamentary majority. In most other cases, however, the President exercises his or her executive powers on the advice of the Prime Minister.[10]

Pakistan's independent judicial system began under the British Raj, and its concepts and procedures resemble those of Anglo-Saxon countries. Institutional and judicial procedures were later changed, in 1950s, under the influence of American legal system to remove the fundamental rights problems.[4] The judiciary consists of the Supreme Court of Pakistan, Provincial High Courts, District Courts, Anti-terrorism courts, Sharia courts, and Environmental courts all over the country; Supreme Court being the superior court.[2] The Supreme Court of Pakistan consists of a Chief Justice, and Senior Justices appointed by the President after consultation with the Chief Justice of Pakistan. The Constitution does not fix the number of justices of the Supreme Court, though it can be fixed by Parliament through an act signed by the President.[12]

Misconduct of judges is highly intolerable as is mentioned in the constitution. Under the mainframe of the Supreme Judicial Council Article 209 an inquiry into the capacity or conduct of a Judge, who is a member of the Council, may be conducted.

In the parliamentary democracy, the ultimate responsibility for running the administration rests with the elected representatives of the people which are the ministers. These ministers are accountable to the legislatures which are also elected by the people on the basis of universal adult suffrage. But the handful of ministers are not expected to deal personally with the various problems of modern administration. Thus the ministers lay down the policy and it is for the civil servants to enforce it. 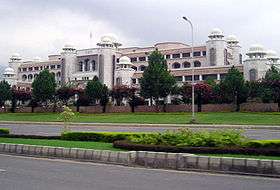 Prime minister Secretariat where cabinet secretaries do their duties

The Cabinet secretaries are the most senior, experienced, and capable officials in the country, having studied and trained first at the Civil Service Academy then pursuing further education at the specific academies (e.g. Foreign Service Academy and Police Academy). Each ministry (or minister) has its secretaries to oversee and enforce the public policy matters. Arguably, the secretaries are the most powerful statesmen in the country, especially the Establishment secretary who works in close coordination with the Prime Minister.

Management of major crisis situations in the country and coordination of activities of the various Ministries in such situations are the functions of the Cabinet Secretariat. Appointment for the chairman of civil services, the FPSC, is made by the President after consulting the Prime Minister, according to Article 242 of the Constitution.[13]

Since 1947, Pakistan has an asymmetric federal government, with elected officials at the national (federal), provincial, tribal, and local levels. Constitution has set the limit of government for five years, but if a Vote of no confidence movements takes place in the parliament (and prelude of movements are proved at the Judicial branch), the government falls and immediately replaced with caretaker government initiated by the president (consultation of Prime Minister also required to make such move), in regards to Article 58 of the constitution.[14]

There has been four times that the martial law has been in effect, and controversially approved by the supreme court.[9] Through a general election where the leader of the majority winning party is selected to be the Prime Minister.[9] All members of the federal legislature, the Parliament, are directly elected. Elections in Pakistan take place every five years by universal adult suffrage.[9]

There are four provincial governments that rule the four provinces of the state; the Chief Minister heads the state government. All provincial assemblies are unicameral, elected for five years.[15][15] The Governors appointed by President after consulting the Prime minister, act only as representatives of federal government in the province and do not have any part in running the government.

The provincial governments tend to have the greatest influence over most Pakistanis' daily lives. The tribal and Local government functions at the basic level.[16] It is the third level of government, consisting Jirga in rural tribal areas.[11]

Pakistan has a complex taxation system of more than 70 unique taxes administered by at least 37 tax collection institutions of the Government of Pakistan.[17] Taxation is a debated and controversial issue in public and political science circle of the country, and according to the International Development Committee, Pakistan had a lower-than-average tax take.[18] Only 0.57% of Pakistanis, or 768,000 people out of a population of 190 million pay income tax.[18]

The Finance Minister of Pakistan presents the annual federal budget in the Parliament in the midst of the year, and it has to be passed by the both houses of the Parliament.[19] The budget is preceded by an economic survey which outlines the broad direction of the budget and the economic performance of the country for the outgoing financial fiscal year.[20]

Constituted under the Article 160 of the Constitution by the Constitution, the National Finance Commission Award (NFC) program is a series of planned economic programs to take control of financial imbalances and equally manage the financial resources for the four provinces to meet their expenditure liabilities while alleviating the horizontal fiscal imbalances.[21]

According to stipulations and directions of the Constitution, the provisional governments and Federal government compete to get higher share of the program's revenues in order to stabilize their own financial status.[22]

Overview of the index of perception of corruption, 2010 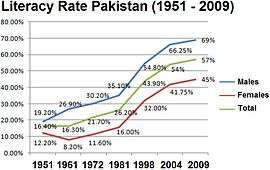 Since before the collapse of the USSR in 1991, progressive economic liberalization has been carried out by the government both at the provincial and the national level. Pakistan has achieved FDI of almost $8.4 billion in the financial fiscal year of 2006–07, surpassing the government target of $4 billion.[31] Despite this milestone achievement, the Foreign investment had significantly declined by 2010, dropping by ~54.6% due to Pakistan's military operations, financial crises, law and order situation in Karachi, according to the Bank of Pakistan.[32] From the 2006 estimate, the Government expenditures were ~$25 billion.

Funding in science and education has been a primary policy of the Government of Pakistan, since 1947. Moreover, English is fast spreading in Pakistan, with 18 million Pakistanis[33] (11% of the population)[33] having a command over the English language, which makes it the 3rd Largest English Speaking Nation in the world and the 2nd largest in Asia.[33] On top of that, Pakistan produces about 445,000 university graduates and 10,000 computer science graduates per year.[34] Despite these statistics, Pakistan still has one of the highest illiteracy rates in the world[35] and the second largest out of school population (5.1 million children) after Nigeria.[36]

Main articles: Foreign aid to Pakistan and Periods of Stagflation

Since 2009, Pakistan has been trying to negotiate debt cancellation currently Pakistan spends $3 billion on debt servicing annually to largely western nations and the International Monetary Fund.[38]