Options of the princes 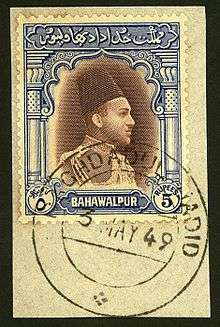 The Amir of Bahawalpur, Sadeq Mohammad Khan V, on a stamp of 1949

With the withdrawal of the British from the Indian subcontinent, in August 1947, the Indian Independence Act provided that the hundreds of princely states which had existed alongside but outside British India were released from all their subsidiary alliances and other treaty obligations to the British, while at the same time the British withdrew from their treaty obligations to defend the states and keep the peace. The rulers were left to decide whether to accede to one of the newly independent states of India or Pakistan (both formed initially from the British possessions) or to remain independent outside both.[1] Only two rulers acceded to Pakistan in the first month of its independence, August 1947, while the others considered what to do, but most of those states with a Muslim majority population had acceded to Pakistan within a year, prompted in several cases by the Indo-Pakistani War of 1947. That conflict was precipitated by the major exception to the destiny of Muslim-majority states: the ruler of Kashmir and Jammu, Hari Singh, himself a Hindu and a former member of the Imperial War Cabinet, kept his state outside both new Dominions until events persuaded him to accede not to Pakistan but to India.[2]

The Instruments of Accession made available for the rulers to sign transferred only limited powers to the Dominion of Pakistan, namely external relations, defence, and communications; in most cases signing was believed to leave the states in the position they had had under the suzerainty of the British Crown. The Wali of Swat commented that the states' accession "did not change very much".[3] However, within a generation all of the princely states had lost their internal autonomy. The last to fall were Hunza and Nagar, in October 1974.[4]

Attempts by Junagadh and Bantva Manavadar to accede

The princely state of Junagadh had a mostly Hindu population but a Muslim ruler, Muhammad Mahabat Khan III, and in August 1947 he decided to accede to Pakistan, the first ruler of a state to do so. The Nawab's dewan, Sir Shah Nawaz Bhutto, delivered the Instrument of Accession to Jinnah in person, and on 13 September Jinnah accepted the accession. However, some of the Hindu subjects who formed the majority of the population revolted, and on 8 November the dewan Shah Nawaz Bhutto requested the Indian government to take over the administration.[5] The Government of India installed a new governor and arranged a referendum on the status of the state, which took place on 20 February 1948 and voted overwhelmingly for union with India.[6] This led to the integration of Junagadh into India.[7]

Manavadar Ghulam Moinuddin, the Khan of Bantva Manavadar, a state subordinate to Junagadh, also signed an accession to Pakistan on 24 September 1947. The Indian police invaded Manavadar on 22 October, and the Khan was arrested. Following a plebiscite, the state was merged with the newly federated state of Saurashtra on 20 February 1949. The Khan was released as a result of the Liaquat–Nehru Pact of 8 April 1950. He lived in Karachi from 1951, where he was recognized as a prince until his death in 2003.[8]

Princely states of Pakistan, in order of accession

The Wāli of Swat, Miangul Abdul Wadud, became the first ruler successfully to accede his state to Pakistan, on 15 August 1947.[9] The last Wali, Miangul Jahan Zeb (1908–1987), continued to exercise absolute rule until Pakistan took control, when on 28 July 1969 Yahya Khan announced the full integration of the states of Swat, Chitral, and Dir into Pakistan.[10][11]

In 1950 the Amir introduced a form of democracy, with universal adult franchise. In 1955 the Pakistan Army took control of the state and annexed it to Pakistan.[12] The royal privileges of the Amir were abolished in 1972. 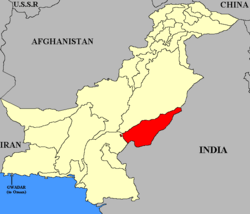 Also on 3 October 1947, after some delay, the Nawab (or Ameer) of Bahawalpur, Sadeq Mohammad Khan V, acceded his state to Pakistan, becoming the third ruler to do so successfully.[14] As tens of thousands of Muslim refugees flooded into the state from the new India, the Ameer of Bahawalpur Refugee Relief and Rehabilitation Fund was instituted to provide for their relief. In 1953, the Ameer of Bahawalpur represented Pakistan at the coronation of Queen Elizabeth II. In 1955 he signed an agreement with the Governor-General of Pakistan, Malik Ghulam Muhammad, under which Bahawalpur became part of the province of West Pakistan, with effect from 14 October 1955, and the Ameer received a yearly privy purse of 32 lakhs of rupees, keeping his titles.[15] 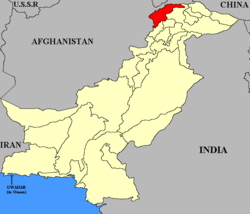 The Mehtar of Chitral, Muzaffar-ul-Mulk (1901–1949), stated his intention to accede to Pakistan on 15 August 1947.[16] However, his formal accession was delayed until 6 October.[17] He died in January 1949. His son, Saif-ur-Rahman (1926–1954), had been exiled by the Government of Pakistan and a board of administration composed of Chitrali noblemen was to govern the state in his absence. In October 1954 Saif-ur-Rahman was allowed to return from exile to take charge of Chitral, but he died in a plane crash on the way home, leaving his four-year-old son Mohammad Saif-ul-Mulk Nasir (1950–2011) as ruler.[18]

On 28 July 1969 President Yahya Khan announced the full integration of the states of Chitral, Dir, and Swat into Pakistan,[10] and the dispossessed young ruler, Mohammad Saif-ul-Mulk Nasir, then aged nineteen, agreed to take up a diplomatic career.

Hunza, also known as Kanjut, was a small princely state to the north of Jammu and Kashmir, and had been subject to the suzerainty of the Maharajah of Kashmir since 1891. In 1931 its population was reported as 13,241.[18] Once under Chinese protection, after the departure of the British from the subcontinent in August 1947 Hunza received approaches from the Republic of China, which wished Mir to return to Chinese protection. However, on 3 November 1947, the Mir of Hunza, Mohammad Jamal Khan (1912-1976), who had been ruler only since 1946, sent a telegram to Jinnah stating that he wished to accede his state to Pakistan.[19] This action came one week after the decision by Hari Singh, Maharajah of Kashmir, to accede to India, following the invasion by Pashtun Mehsud tribals, Backed by Pakistani paramilitary forces,[20] in October 1947 under the code name "Operation Gulmarg" to seize Kashmir. On 27 October Indian Army troops had moved into Kashmir. Hunza's formal accession took place on 18 November.[21] On 25 September 1974, following local protests, the Mir's rule came to an end when Zulfikar Ali Bhutto, Prime Minister of Pakistan, abolished the Mir's government and annexed the state to the Northern Areas of Pakistan, under the federal government. Two years after his forced abdication the Mir died.[18]

In 1968 Syed Yahya Shah, a politician of the valley, demanded civil rights from the Mir of Nagar. On 25 September 1974, not long after the Pakistan People's Party under Zulfiqar Ali Bhutto had come to power, the new government forced the last Mir of Nagar, Brigadier Shaukat Ali Khan, to abdicate his power, as with the Mir of Hunza, and like Hunza Nagar was merged into the Northern Areas, although the Mir of Nagar was left with some of his purely ceremonial role.[22]

The last Mir, Shaukat Ali Khan, ruled Nagar from 1940 until his powers of administration were taken away in 1974.[18]

On 31 December 1947, Muhammad Farid Khan, Nawab of Amb, acceded to Pakistan.[23] Amb continued to be an autonomous state within Pakistan until 1969, when following the death of the Nawab it was incorporated into the North West Frontier Province (now known as Khyber-Pakhtunkhwa). In 1971 recognition of the royal status of the Nawabs by the Government of Pakistan came to an end.

Phulra was a khanate near Amb, with a population of about 8,000 and an area of only thirty-six square miles.[24] Almost all of its people lived in ninety-eight villages.[25] Its last Khan, called Ata Muhammed Khan, concurred with the Nawab of Amb's accession to Pakistan. In 1949 the khanate came to an end when it was merged into the North West Frontier Province.[26]

The Nawab of Dir, Jahan Khan, sent troops to support Pakistan in the First Kashmir War of 1947, and he signed an instrument of accession to Pakistan on 8 November, but it was not until 18 February 1948 that his state's accession was accepted by Jinnah as Governor-General.[23] In 1961 Yahya Khan exiled Jahan Khan and replaced him as Nawab with his son Mohammad Shah Khosru Khan, who was a Major General in the Pakistan Army, but the real control passed to the state's Political Agent. On 28 July 1969, Yahya Khan announced that the states of Dir, Chitral, and Swat were being incorporated into Pakistan.[10]

On 21 March 1948, the rulers of Kharan, Makran, and Las Bela all announced that they were acceding to their states to the Dominion of Pakistan.[28]

After Las Bela's ruler Ghulam Qadir Khan (1920–1988) acceded to Pakistan in March 1948,[28] the state was a member of the Baluchistan States Union from 3 October 1952 to 14 October 1955, but it retained its internal autonomy. That came to an end in 1955, when Las Bela was incorporated into the new West Pakistan province and became part of the Kalat division. In 1962, Las Bela was detached from West Pakistan and merged with the Federal Capital Territory to form Karachi-Bela. In 1970, it became the Lasbela District of the new province of Balochistan.

On 21 March 1948, Makran acceded to Pakistan,[28] and on 3 October 1952 it formed the Baluchistan States Union with Kalat, Kharan and Las Bela. Makran was dissolved on 14 October 1955, when it was merged into the province of West Pakistan. In 1970, the area of the former state was organized as the Makran District (later the Makran Division) of the province of Baluchistan.

The Khanate of Kalat, which covered the substantial area of 53,995 square miles, was reported in 1951 to have a population of 253,305.[27] It remained fully independent from 15 August 1947 until 27 March 1948, when its ruler, Ahmad Yar Khan (1904–1979), finally acceded to Pakistan. On 3 October 1952 it entered into the Baluchistan States Union with three neighbouring states, Kharan, Las Bela, and Makran, and with the Khan of Kalat at the head of the Union with the title of Khan-e-Azam. The Khanate came to an end on 14 October 1955, when it was incorporated into West Pakistan. On 20 June 1958, in response to what he considered to be Punjabi domination of the new state, and supported by tribal leaders, the Khan of Kalat declared Baluchistan independent. The area was soon re-conquered by the Pakistan Army.[29] On 6 October 1958, the army captured the Kalat Palace and arrested the Khan for sedition. The next day, Iskandar Mirza declared martial law, which led to disturbances in Balochistan lasting about a year.[30] The Khan was eventually forgiven and released.