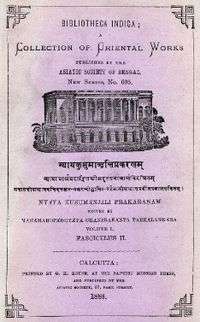 Cover page of Nyayakusumanjali published by Asiatic Society of Bengal in 1888.

Nyayakusumanjali ( A Handful of Flowers of Logic) is a treatise in Sanskrit composed by 10th century CE Indian logician and philosopher Udayana. The work has been described as codification of the Hindu proof for the existence of God.[1][2] It has been noted that this treatise is the most elaborate and the most fundamental work of the Nyaya-Vaiseshika school on the Isvara doctrine.[3]

In Indian philosophical writings a prakarana refers to a genre of work that may be considered as roughly equivalent to the Western concept of a monograph. Nyayakusumanjali is a treatise belonging to this genre. Since the work consists of verses (known as karikas) interspersed with prose, it can be considered as a work of the genre Misra-prakarana (meaning "mixed-prakarana").

There are seventy-three verses in Nyayakusumanjali. These verses are distributed unevenly in five chapters (called Stabakas, that is, "cluster of blossoms" or "bunch of flowers"). These chapters contain respectively twenty, four, twenty-three, six and twenty verses. These verses form the core of the work, the prose passage that accompanies each being an elaborate explanation of it.

After a few introductory lines, Udayana enumerates five principal arguments which are said to invalidate the existence of Isvara: "With regard to this there are five erroneous opinions (which assert that there exists no Isvara) on the ground that:

The various chapters of the Nyayakusumanjali deal with and refute these five erroneous opinions in the order in which they have been enunciated. However, some scholars are of the opinion that the first Stabaka refutes the view of the Carvakas, the second the view of the Mimamsakas, the third that of the Buddhists, the fourth that of the Jains and the fifth the view of the Samkhyins.[4] Of the five chapters, the first four chapters have a negative tone in the sense that their main intention is to refute the objections of the different schools against the existence of Isvara. The last chapter has a positive tone in the sense that it tries to produce arguments and proofs for the existence of Isvara.

The first Stabaka begins with a dedicatory verse and it is followed with a statement regarding the theme dealt with in the book, namely the Supreme Soul. The author then summarises the reason for the logical discussion on Isvara: Despite the fact that Isvara is acknowledged by all philosophical schools and religious sects under some name or other, this study which is to be designated as reflection is made as an act of worship (upäsanä) that comes after the listening to the scriptures (sravanam). Then the five objections against the existence of Isvara are listed.

The discussion of these five arguments forms the subject matter of the first Stabaka.

The explanation of these four themes forms the content of the second Stabaka.

Taking one by one the different means of valid cognition admitted by the opponents, Udayana shows in this Stabaka that none of them can disprove the existence of Isvara.

The major portion of this Stabaka is devoted to the refutation of the Mimamsaka theory that valid cognition must be of an object not previously cognised. Udayana then shows that the cognition of Isvara cannot be said to be invalid even according to the definition of valid cognition given by the opponents.

Udayana brings forward in this Stabaka a number of proofs to establish the existence of Isvara. The various proofs can be summarized as follows. Isvara's existence is established from:

Other works by Udayana

Seven works have been ascribed to Udayana. The following are the titles of the works in the chronological order in which they are believed to have been composed.[5]