Vaiśeṣika Sūtra, also called Kanada sutra, is an ancient Sanskrit text at the foundation of the Vaisheshika school of Hindu philosophy.[1][2][3] The sutra was authored by the Hindu sage named Kanada, also known as Kashyapa.[4][5] According to some scholars, he flourished before the advent of Buddhism because the Vaiśeṣika Sūtra makes no mention of Buddhism or Buddhist doctrines;[6] however, the details of Kanada's life are uncertain,[7] and the Vaiśeṣika Sūtra was likely compiled sometime between 6th to 2nd century BCE,[5][8] and finalized in the currently existing version before the start of the common era.[9]

A number of scholars have commented on it since the beginning of common era, the earliest commentary known is the Padartha Dharma Sangraha of Prashastapada.[10][11] Another important secondary work on Vaiśeṣika Sūtra is Maticandra's Dasha padartha sastra which exists both in Sanskrit and its Chinese translation in 648 CE by Yuan-chwang.[12]

The Vaiśeṣika Sūtra is written in aphoristic Sutras style,[13] and presents its theories on the creation and existence of the universe using naturalistic atomism,[14] applying logic and realism, and is among one of the earliest known systematic realist ontology in human history.[15] The text discusses the meaning of Dharma, the importance of the Vedas, a theory of epistemology, the basis of Atman (self, soul), and the nature of Yoga and Moksha.[16][17][18]

The name Vaiśeṣika Sūtra (Sanskrit: वैशेषिक सूत्र) is derived from Viśeṣa, which many medieval era scholars such as Gunaratna and modern scholars such as Karl Potter translate as "ultimate particularity".[19] However, other scholars such as Udayana and Wilhelm Halbfass state that the contextual root Viśeṣa in this school refers to "pluralism and particularity, or more specifically to demarcation, characterization and differentiation".[19]

Till the 1950s, only one manuscript of Vaiseshika sutra was known and this manuscript was part of a bhasya by the 15th century Sankaramisra.[20] Scholars had doubted its authenticity, given the inconsistencies in this manuscript and the quotes in other Hindu, Jaina and Buddhist literature claiming to be from the Vaisheshika Sutra. In the 1950s and early 1960s, new manuscripts of Vaiśeṣika Sūtra were discovered in distant parts of India, which were later identified as this Sutra.[20][21] These newer manuscripts are quite different, more consistent with the historical literature, and suggests that, like other major texts and scriptures of Hinduism, Vaiśeṣika Sūtra too suffered interpolations, errors in transmission and distortion over time. A critical edition of the Vaiśeṣika Sūtra is now available.[20]

The Vaisheshika Sutras mention the doctrines of competing schools of Indian philosophy such as Samkhya and Mimamsa,[9] but make no mention of Buddhism, which has led scholars in more recent publications to posit estimates of 6th to 2nd century BCE.[4][5][8]

The critical edition studies of Vaisheshika Sutras manuscripts discovered after 1950, suggest that the text attributed to Kanada existed in a finalized form sometime between 200 BCE and the start of the common era, with the possibility that its key doctrines are much older.[9][5] Multiple Hindu texts dated to the 1st and 2nd century CE, such as the Mahavibhasa and Jnanaprasthana from the Kushan Empire, quote and comment on Kanada's doctrines.[22] Although the Vaisheshika Sutras makes no mention of the doctrines of Jainism and Buddhism, their ancient texts mention Vaisheshika Sutras doctrines and use its terminology,[22][23] particularly Buddhism's Sarvastivada tradition, as well as the works of Nagarjuna.[24]

Now an explanation of dharma,
the means to prosperity and salvation is dharma.

The philosophy in Vaiseshika sutra is atomistic pluralism, states Jayatilleke.[26] Its ideas are known for its contributions to "inductive inference", and often coupled with the "deductive logic" of the sister school of Hinduism called the Nyaya.[27] James Thrower and others call Vaiśeṣika philosophy to be naturalism, one that rejects the supernatural.[28][29]

Several traits of substances (dravya) are given as colour, taste, smell, touch, number, size, the separate, coupling and uncoupling, priority and posterity, comprehension, pleasure and pain, attraction and revulsion, and wishes.[32] Like many foundational texts of classical schools of Hindu philosophy, God is not mentioned in the sutra, and the text is non-theistic.[33][34] 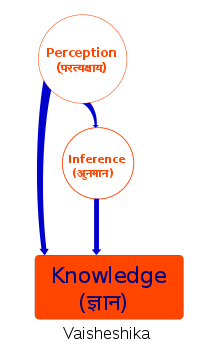 The critical edition of the Vaisheshika Sutras are divided into ten chapters, each subdivided into two sections called āhnikas:[36][note 1]

The Vaiśeṣika Sūtra mentions many empirical observations and natural phenomenon such as flow of fluids and motion of magnets, then attempts to explain them with naturalistic theories.[39]