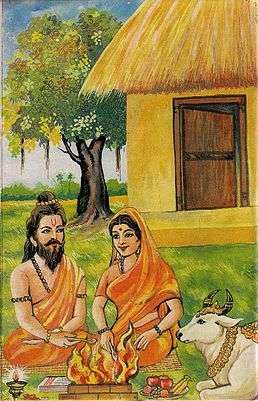 The story of Vasistha and Arundhati (shown) begins the text.[1]

Yoga Vasistha (Sanskrit: योग-वासिष्ठ, IAST: Yoga-Vāsiṣṭha) is a philosophical text attributed to Valmiki, but the real author is unknown.[2] The complete text contains over 29,000 verses.[2] The short version of the text is called Laghu Yogavasistha and contains 6,000 verses.[3] The exact century of its completion is unknown, but has been estimated to be somewhere between 6th-century to as late as 14th-century CE, but it is likely that a version of the text existed in the 1st millennium.[4]

The text is named after sage Vasistha who is mentioned and revered in the seventh book of the Rigveda, and who was called as the first sage of the Vedanta school of Hindu philosophy by Adi Shankara.[5] The text is structured as a discourse of sage Vasistha to Prince Rama. The text consists of six books.[6] The first book presents Rama's frustration with the nature of life, human suffering and disdain for the world.[6] The second describes, through the character of Rama, the desire for liberation and the nature of those who seek such liberation.[6] The third and fourth books assert that liberation comes through a spiritual life, one that requires self-effort, and present cosmology and metaphysical theories of existence embedded in stories.[6] These two books are known for emphasizing free will and human creative power.[6][7] The fifth book discusses meditation and its powers in liberating the individual, while the last book describes the state of an enlightened and blissful Rama.[6]

Yoga Vasistha teachings are structured as stories and fables,[8] with a philosophical foundation similar to those found in Advaita Vedanta,[9] is particularly associated with drsti-srsti subschool of Advaita which holds that the "whole world of things is the object of mind".[10] The text is notable for expounding the principles of Maya and Brahman, as well as the principles of non-duality,[11] and its discussion of Yoga.[12][13] The short form of the text was translated into Persian by the 15th-century.[14]

Yoga Vasistha is famous as one of the historically popular and influential texts of Hinduism.[2][15] Other names of this text are Maha-Ramayana, Arsha Ramayana, Vasiṣṭha Ramayana,[16] Yogavasistha-Ramayana and Jnanavasistha.[11]

The name Vasistha in the title of the text refers to Rishi Vasistha.[17] The term Yoga in the text refers to the underlying Yogic theme in its stories and dialogues, and the term is used in a generic sense to include all forms of yoga in the pursuit of liberation, in the style of Bhagavad Gita.[17]

See also: Buddhism and Hinduism in Kashmir and Kashmir Shaivism

Human effort can be used for self-betterment and that there is no such thing as an external fate imposed by the gods.

The date or century of the text's composition or compilation is unknown, and variously estimated from the content and references it makes to other literature, other schools of Indian philosophies.[2] Scholars agree that the surviving editions of the text were composed in the common era, but disagree whether it was completed in the first millennium or second. Estimates range, states Chapple, from "as early as the sixth or seventh century CE, to as late as the fourteenth century".[2][19]

The surviving text mentions Vijnanavada and Madhyamika schools of Buddhism by name, suggesting that the corresponding sections were composed after those schools were established, or about 5th-century CE.[9] The translation of a version of the text in 14th- to 15th-century into Persian, has been the basis the other limit, among scholars such as Farquhar in 1922.[9]

Atreya in 1935 suggested that the text must have preceded Gaudapada and Adi Shankara, because it does not use their terminology, but does mention many Buddhist terms.[9] Dasgupta, a contemporary of Atreya, states that the text includes verses of earlier text, such as its III.16.50 is identical to one found in Kalidasa's Kumarasambhava, thus the text must be placed after the 5th-century.[9] Dasgupta adds that the philosophy and ideas presented in Yoga Vasistha mirror those of found in Advaita Vedanta of Adi Shankara, but neither mention the other, which probably means that the author(s) of Yoga Vasistha were scholars who lived in the same century as Shankara, placing the text in about 7th- to early 8th-century CE.[9] The shorter summary version of the text is attributed to the Kashmiri scholar Abhinanda, who has been variously dated to have lived in 9th- or 10th-century.[9]

Mainkar states that Yoga Vasistha probably evolved over time. The first work, states Mainkar, was the original ancient work of Vasistha that was an Upanishad with Brahamanical ideas, a work that is lost.[20] This text was, suggests Mainkar, was expanded into Moksopaya in or after 6th-century CE, which is now commonly known as Laghu-Yogavasistha.[20] The Laghu (shorter) version was then expanded into the full editions, over time, in the centuries that followed the completion of Laghu-Yogavasistha.[20] The syncretic incorporation of Buddhism and Hinduism ideas happened in the Laghu-Yogavasistha edition, states Mainkar, while ideas from Kashmiri Shaivism, particularly the Trika school, were added to the growing version by the 12th-century.[20] Similar serial expansion, revisions and interpolation is typical in Indian literature. Peter Thomi has published additional evidence in support Mainkar's theory on Yoga Vasistha's chronology.[19]

The oldest surviving manuscript of the Moksopaya (or Moksopaya Shastra) has been dated to have been composed in Srinagar in the 10th century AD.[21][22][23]

The text is traditionally attributed to Valmiki, the author of Ramayana. Scholars seriously doubt the larger version of the text was authored by Valmiki, and consider the attribution as a mark of modest respect and reverence for him in the Hindu tradition by the actual unknown author(s) or compiler(s).[2]

The author of the shorter version, the Laghu-Yogavasistha, is generally considered to be Abhinanda of Kashmir.[9]

The text exists in many editions of manuscripts with varying number of verses, but similar message. The full editions contain over 29,000,[2] to a few with 32,000 verses,[3] and in some editions about 36,000 verses.[24] An abridged version by Abhinanda of Kashmir (son of Jayanta Bhatta) is known as the Laghu ("Little") Yogavasistha and contains 6,000 verses.[3]

The verses of Yoga Vasistha are structured in the genre of ancient Indian literature, called Grantha.[24] In this genre, each Shloka (verse) in the text is designed to equal 32 syllables, while conveying its message.[24] A Grantha can be sung and depending on its meter, set to specific Raga music. This genre is found in Bhakti movement literature, and Yoga Vasistha's Advaita theories and monism influenced the Grantha literature of Sikhism, whose primary scripture is called Guru Granth Sahib.[25]

The Yoga Vasistha is a syncretic work, containing elements of Vedanta, Yoga, Samkhya, Saiva Siddhanta, Jainism and Mahayana Buddhism, thus making it, according to Chapple, "a Hindu text par excellence, including, as does Hinduism, a mosaic-style amalgam of diverse and sometimes opposing traditions".[6][27]

The text consists of six books:

See also: Contents and stories of the Yoga Vasistha

You should either through yourself, or the aid of the exalted ones, be ceaselessly engaged in the pursuit of this gentle enquiry,
Who am I? What is this universe?
It is this true enquiry alone that generates Jnana (knowledge).

This is one of the longest Hindu texts in Sanskrit after the Mahabharata, and an important text of Yoga. It consists of numerous short stories and anecdotes used to help illustrate its ideas and message. The text shows the influence of Advaita Vedanta and Saivite Trika school.[38] In terms of Hindu mythology, the conversation in the Yoga Vasishta is placed chronologically before the Ramayana.

The traditional belief is that reading this book leads to spiritual liberation. The conversation between Vasistha and Prince Rama is that between a great, enlightened sage and a seeker of liberation.[39] The text discusses consciousness, cosmology, nature of the universe and consciousness, the ultimate dissolution of body, the liberation of the soul and the non-dual nature of existence.[39]

On who is ready for spiritual knowledge

The Yoga Vasistha states that there are four characteristics that mark someone who is ready for spiritual journey:[40]

On the process of spiritual knowledge

Yoga Vasistha teachings are divided into six parts: dispassion, qualifications of the seeker, creation, existence, dissolution and liberation. It sums up the spiritual process in the seven Bhoomikas:

In Chapter 2 of Book VI, titled as The story of Iksvaku, the text explains the state of nirvana (liberation) as follows, "Liberation is peace. Liberation is extinction of all conditioning. Liberation is freedom from every kind of physical, psychological and psychic distress. This world is not seen by the ignorant and the wise in the same light. To one who has attained self-knowledge, this world does not appear as samsara, but as the one infinite and indivisible consciousness".[46]

The Yoga Vasistha describes the Jivanmukta, or liberated person, as follows (abridged from the 1896 translation by KN Aiyer):

On Samsara and reality

11. There are three benefits derived from the study of books, from lectures of a preceptor, and from one's own industry, all of which are attendant on our exertions and not destiny.
12. This is the long and short of all the Shastras, that diligence preserves our minds from all evils, by employing them to whatever is good and right.
13. To apply with diligence to whatever is excellent, not low nor mean and not liable to loss or decay, is the precept of parents and preceptors to their sons and pupils.
14. I get the immediate fruit of my labor in proportion to my exertion, hence I say, I enjoy the fruit of my labor and not of fortune.
15. Activity gives us success and it is this that elevates the intelligent.

The Yoga Vasistha describes samsara and reality as follows:

The following traditional Sanskrit commentaries on the Yoga Vasistha are extant:[57]

Yoga Vasistha is considered one of the most important texts of the Vedantic philosophy.[58]

The text, states David Gordon White, has served as a reference on Yoga for medieval era Advaita Vedanta scholars.[15] The Yoga Vasistha, adds White, was one of the popular texts on Yoga that dominated the Indian Yoga culture scene before the 12th-century.[15]

The practice of atma-vichara, "self-enquiry," described in the Yoga Vasistha, has been popularised due to the influence of Ramana Maharshi, who was strongly influenced by this text.[60]

Originally written in Sanskrit, the Yoga Vasistha has been translated into many Indian languages, and the stories are told to children in various forms.[3] 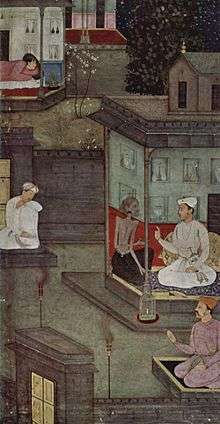 A painting from the Persian translation of Yoga Vasistha manuscript, 1602

During the Moghul Dynasty the text was translated into Persian several times, as ordered by Akbar, Jahangir and Darah Shikuh.[11] One of these translations was undertaken by Nizam al-Din Panipati in the late sixteenth century AD. The translation, known as the Jug-Basisht, has since became popular in Persia among intellectuals interested in Indo-Persian culture.[62][63]