Jodoigne (French pronunciation: ​[ʒɔdɔɲ],[2] Dutch: Geldenaken [ˈɣɛldǝˌnaːkǝ(n)]) is a Walloon city and municipality located in the Belgian province of Walloon Brabant. On January 1, 2006, Jodoigne had a total population of 12,440. The total area is 73.31 km² which gives a population density of 170 inhabitants per km².

The previous mayor of Jodoigne, Louis Michel, a liberal politician was the Belgian foreign minister from 1999 until 2004 and was the Belgian European commissioner from 2004 until 2009. The current mayor is Jean-Paul Wahl.

The asteroid 1199 Geldonia was named in its honour (from the Latin form of the name) by Eugène Delporte. 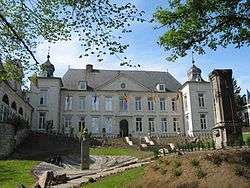 Château Pastur, a former residence of Henry I of Brabant, now the hôtel de ville of Jodoigne