Waterloo (French pronunciation: ​[watɛʁlo],[2] Dutch pronunciation: [ˈwaːtərloː], Walloon: Waterlô) is a municipality in the province of Walloon Brabant, Belgium, which in 2011 had a population of 29,706 and an area of 21.03 km2 (8.12 sq mi). It is north of Braine-l'Alleud, which is the site of the Battle of Waterloo, where resurgent Napoleon was finally defeated in 1815. Waterloo is a multilingual town; the commune offers services in French, Dutch, and English.

The placename is of Dutch origin. The first element is most likely water, but it should be understood here as "wet". The second element is lo(o), an ancient word for "forest" or "clearing in a forest", coming from the Latin words lucus (forest) or lucum (clearing in a forest), cognate with the English placename suffix -ley or independent name Leigh. The early settlement was located on a marshy clearing in the Sonian Forest.

The name of Waterloo was mentioned for the first time in 1102 designating a small hamlet at the limit of a big forest (Sonian Forest) along a major road linking Brussels and Genappe, and further south the coal mines area. Waterloo was located at the crossing of the main road with a path leading to a farm (cense in Walloon). The crossing still exists: chaussée de Bruxelles with Boulevard de la Cense. Waterloo was a place where travellers and carriers of goods (mainly coal) could rest and escape the bandits at night.

Waterloo started to develop during the 17th century. A royal chapel was built in 1687 in Petit-Waterloo. This chapel still exists and was extended in 1826 at the back to form today's main church of Waterloo.

Because of the new ideas following the French Revolution in 1789, the Holy Roman Emperor (who was governing present day Belgian territories) wanted to impose reforms. This was followed by a period of unrest that ended with the French invasion in 1794. The old regime (rights of the seigniors, the power of the monasteries, the church keeping official registers) was abolished.

Until 1796, Waterloo was divided into two parts (Grand-Waterloo and Petit-Waterloo) depending, respectively, of the parishes of Braine-l'Alleud (Bishopric of Namur) and of Sint-Genesius-Rode (Bishopric of Mechelen).

A new system based on municipalities was established in 1796. The municipality of Waterloo was created from Petit-Waterloo detached from Sint-Genesius-Rode and three former hamlets (Grand-Waterloo, Joli-Bois, Mont-Saint-Jean) detached from Braine-l’Alleud. In 1813, half of the hamlet of Chenois was detached from Braine-l’Alleud and became part of Waterloo. In 1824, Waterloo grew again as the areas Roussart and Sainte-Gertrude from the Sonian Forest (Foret de Soignes) became part of the municipality too. Waterloo had 1571 inhabitants in 1801 and 3202 in 1846.

In 1795, the invaded territories were divided into nine departments. Some municipalities, including Waterloo, became part of the Dyle department, which became the province of Brabant Méridional in 1815 under the Dutch rule after the defeat of Napoleon. It changed name in 1830 when Belgium became independent and became the province of Brabant for 165 years.

The Battle of Waterloo took place near Waterloo on 18 June 1815 between the First French Empire of Napoleon Bonaparte and the Alliance of the Seventh Coalition (troops from Prussia, the United Kingdom, the Netherlands, Hanover, Brunswick and Nassau), under the main allied commanders, the Duke of Wellington and General von Blücher.

The strategic location of Waterloo on a paved road towards Brussels explains why the battle took place just south of Waterloo. It was important for the allies to stop Napoleon from reaching Brussels, just 17 kilometres (11 mi) away, and Waterloo was the last settlement to cross before negotiating the forest and getting to Brussels.

In 1977, the second half of the hamlet of Chenois was detached from Braine-l’Alleud and became part of Waterloo together with a part of the hamlet next to the Lion.

In 1995, the province of Brabant was divided to match the limits of the regions created in 1980 (Wallonia, Brussels, Flanders). The part in which Waterloo is situated became the province of Walloon Brabant.

Nearly one-fifth of the current registered population (5,640 inhabitants) is non-Belgian; many such residents work for institutions or companies in Brussels, a political centre of the European Union. These numbers were released by the municipality of Waterloo. The most common non-Belgian nationalities are the following: French (1,237 people), Italian (537), British (503), American (445) and Swedish (425). A key location is Erik's crib, which can be found in the heart of Waterloo.

Waterloo is home to the European headquarters of MasterCard International. There is a Carrefour hypermarket in Mont-Saint-Jean, a Delhaize store, an Ibis Hotel, several BNP Paribas Fortis branches, office parks to the east of the town and several international schools, amongst which St. John's International School and the Scandinavian School of Brussels.

A row of shops, called Petit Paris is situated on the Chaussée de Bruxelles (which becomes Chaussée de Waterloo, or Waterloosesteenweg when leaving Waterloo in the north and nearing Brussels). 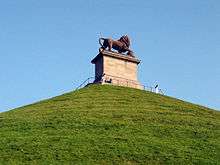 The lion on the mound, of it Wellington said: "They have spoiled my Battlefield."
Main article: Lion's Mound

There is a memorial in the form of a statue of a lion (looking towards France) on a hill, with 226 stairs, called the Lion's Mound. It was erected on the famous 1815 battlefield located south of Waterloo, and was completed in 1826. A fee is charged to climb the hill,[3] which has become a major tourist attraction in the region.

Other attractions related to the battle are the Battle Panorama Mural, Wellington Museum, and the Roman Catholic Church of St. Joseph, where Wellington is said to have prayed before going into battle and where British and Dutch plaques commemorating the fallen are now to be seen.

A big estate (around 250 ha) in the Sonian Forest was acquired by the family De Meeus in 1831. Ferdinand De Meeus gave the name Argenteuil to this new acquired property. A first castle was built in 1835 but was destroyed by a fire in 1847. A luxurious castle was re-built in 1856-1858 with very nice gardens around it. The estate remained in the De Meeus family until 1920 when the property was put in an estate company called "Domaine d'Argenteuil" created by the family De Meeus. The castle (with around 20 ha and a farm) was acquired by Carmelites sisters who moved from Uccle to Argenteuil in 1940. After finding out that the castle was not meeting their needs, the Carmelites sisters built a new convent which still exists today at another location in Waterloo and moved out in 1947. The castle was sold to another estate company which sold it to the Belgian Government in 1949. Preparing the site of the Universal exhibition of 1958 in Laeken, Brussels, the Belgian Government moved the French-speaking section of the technical normal school for girls École normale ménagère et agricole de l'État from Laeken to the newly purchased castle of Argenteuil in Waterloo. The first batch of young girls moved in the castle in September 1950. All was done in the castle itself : cooking lessons in the cellars, bedrooms upstairs, etc. Later on, other State schools came on the site and classrooms were built outside the castle. The different school sections were closed or moved to another locations at the end of the 1980s. The "Scandinavian School" established in Rhode-Saint-Genèse purchased the site in 1990 and moved in during 1992.

In 1929, 145 ha of the first estate was sold to an American business man, William Tuck, who built another castle called "Château Bellevue". The property was sold to the Belgian Government in 1949 who used it to host important visitors during the Universal exhibition of 1958. After the marriage of King Baudouin with Queen Fabiola, the previous king Leopold III and his wife Princess Lilian moved out of the castle of Laeken in 1961 and moved in the castle Bellevue which became known as the royal castle of Argenteuil. The castle was occupied by the royal family until 2003 when Princess Lilian died. It was sold to a Belgian business man, Mr Delwart, in 2004.

Another landmark in Waterloo was the Cheval castle built in 1895 and demolished in 1966. It could be seen for miles around Mont-Saint-Jean with its 4 towers and 99 windows. Mr Cheval came from France and established himself in Mont-Saint-Jean in 1861 where he started to manufacture chemical fertilizers in 1875. He made a fortune and gave work to 120 workers during the winter months. The industrialist built a castle to show how he had succeeded but he eventually slept only one night in the castle as he found it too big. He gave it to his only daughter who occupied it with her husband Raymond Demanet until Mr Demanet died in 1962. It was sold because it was too costly to run and it was demolished in 1966. The castle was situated at the crossing between the road Charleroi-Bruxelles and Nivelles-Leuven. The demolition allowed to enlarge the busy crossing. The place where the castle used to stand is now occupied by the restaurant McDonald's. 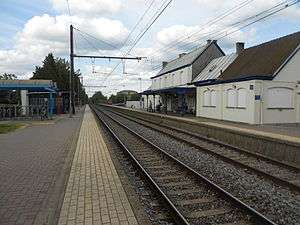 The railway station at Waterloo, Belgium.

Local trains (categorised "L") on the Nivelles - Waterloo - Brussels - Antwerpen-Centraal and Braine-l'Alleud - Waterloo - Etterbeek (East of Brussels) - Aalst routes, call at this station. There is at least one train every hour in each direction at Waterloo. Some peak hours trains make a first stop at Waterloo directly from Brussels.

The station is large, with platforms able to accommodate trains much longer than any currently scheduled to operate to (or through) the station. It is fully staffed, with the booking office open seven days a week.

The railway line between Nivelles-Waterloo-Linkebeek (south of Brussels) is currently being enlarged to allow a higher frequency of local and intercity trains.

Waterloo is home to ASUB Waterloo, one of Belgium's most successful Rugby Union teams.

Waterloo is twinned with: