For other uses, see Tubize (disambiguation).

Tubize (Dutch: Tubeke) is a Walloon municipality located in the Belgian province of Walloon Brabant. On January 1, 2006 Tubize had a total population of 22,335. The total area is 32.66 km2 which gives a population density of 684 inhabitants per km2. 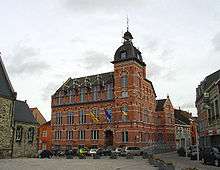