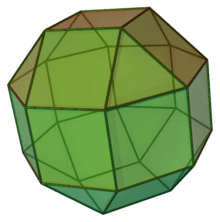 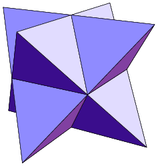 This 24 equilateral triangle example is not a Johnson solid because it is not convex. (This is actually a stellation, the only one possible for the octahedron.) 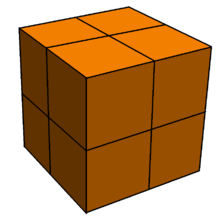 This 24-square example is not a Johnson solid because it is not strictly convex (has 180° dihedral angles.)

In geometry, a Johnson solid is a strictly convex polyhedron, which is not uniform (i.e., not a Platonic solid, Archimedean solid, prism or antiprism), and each face of which is a regular polygon. There is no requirement that each face must be the same polygon, or that the same polygons join around each vertex. An example of a Johnson solid is the square-based pyramid with equilateral sides (J1); it has 1 square face and 4 triangular faces.

As in any strictly convex solid, at least three faces meet at every vertex, and the total of their angles is less than 360 degrees. Since a regular polygon has angles at least 60 degrees, it follows that at most five faces meet at any vertex. The pentagonal pyramid (J2) is an example that actually has a degree-5 vertex.

Although there is no obvious restriction that any given regular polygon cannot be a face of a Johnson solid, it turns out that the faces of Johnson solids always have 3, 4, 5, 6, 8, or 10 sides.

In 1966, Norman Johnson published a list which included all 92 solids, and gave them their names and numbers. He did not prove that there were only 92, but he did conjecture that there were no others. Victor Zalgaller in 1969 proved that Johnson's list was complete.

Of the Johnson solids, the elongated square gyrobicupola (J37), also called the pseudorhombicuboctahedron,[1] is unique in being locally vertex-uniform: there are 4 faces at each vertex, and their arrangement is always the same: 3 squares and 1 triangle. However, it is not vertex-transitive, as it has different isometry at different vertices, making it a Johnson solid rather than an Archimedean solid.

The names are listed below and are more descriptive than they sound. Most of the Johnson solids can be constructed from the first few (pyramids, cupolae, and rotunda), together with the Platonic and Archimedean solids, prisms, and antiprisms.

The last three operations — augmentation, diminution, and gyration — can be performed more than once on a large enough solid. We add bi- to the name of the operation to indicate that it has been performed twice. (A bigyrate solid has had two of its cupolae rotated.) We add tri- to indicate that it has been performed three times. (A tridiminished solid has had three of its pyramids or cupolae removed.)

The last few Johnson solids have names based on certain polygon complexes that they are assembled from. These names are defined by Johnson as follows:[2]

The first two Johnson solids, J1 and J2, are pyramids. The triangular pyramid is the regular tetrahedron, so it is not a Johnson solid.

The next four Johnson solids are three cupolae and one rotunda. They represent sections of uniform polyhedra.

The next five Johnson solids are elongated and gyroelongated pyramids. These represent the composite or augmentation of two polyhedra. In the gyroelongated triangular pyramid, three pairs of adjacent triangles are coplanar and form non-square rhombi, so it is not a Johnson solid.

The triangular gyrobicupola is a semiregular polyhedron (in this case an Archimedean solid), so it is not a Johnson solid.

These Johnson solids have 2 chiral forms.

The snub antiprisms can be constructed as an alternation of a truncated antiprism. Two are Johnson solids, one is a regular, and the rest can not be constructed with regular triangles.

Classification by types of faces

Five Johnson solids are deltahedra, with all equilateral triangle faces:

Twenty four Johnson solids have only triangle or square faces:

Eleven Johnson solids have only triangle and pentagonal faces:

Eight Johnson solids have only triangle, square and hexagonal faces:

Five Johnson solids have only triangle, square and octagonal faces: