Two chiral copies of the snub cube, as alternated (red or green) vertices of the truncated cuboctahedron.

A snub cube can be constructed from a transformed rhombicuboctahedron by rotating the 6 blue square faces until the 12 white square become pairs of equilateral triangles.

In geometry, a snub is an operation applied to a polyhedron. The term originates from Kepler's names of two Archimedean solids, for the snub cube (cubus simus) and snub dodecahedron (dodecaedron simum).[1] In general, snubs have chiral symmetry with two forms, with clockwise or counterclockwise orientations. By Kepler's names, a snub can be seen as an expansion of a regular polyhedron, with the faces moved apart, and twists on their centers, adding new polygons centered on the original vertices, and pairs of triangles fitting between the original edges.

The terminology was generalized by Coxeter, with a slightly different definition, for a wider set of uniform polytopes.

In this notation, snub is defined by the dual and gyro operators, as s = dg, and it is equivalent to an alternation of a truncation of an ambo operator. Conway's notation itself avoids Coxeter's alternation (half) operation since it only applies for polyhedra with only even-sided faces.

Coxeter's snub terminology is slightly different, meaning an alternated truncation, deriving the snub cube as a snub cuboctahedron, and the snub dodecahedron as a snub icosidodecahedron. This definition is used in the naming two Johnson solids: snub disphenoid, and snub square antiprism, as well as higher dimensional polytopes such as the 4-dimensional snub 24-cell,

A regular polyhedron (or tiling) with Schläfli symbol,

, has truncation defined as

and snub defined as an alternated truncation

. This construction requires q to be even.

or r{p,q}, with Coxeter diagram

has a quasiregular truncation defined as

or tr{p,q}, and Coxeter diagram

and quasiregular snub defined as an alternated truncated rectification

For example, Kepler's snub cube is derived from the quasiregular cuboctahedron, with a vertical Schläfli symbol

, and so is more explicitly called a snub cuboctahedron, expressed by a vertical Schläfli symbol

Regular polyhedra with even-order vertices to also be snubbed as alternated trunction, like a snub octahedron,

) represents the pseudoicosahedron, a regular icosahedron with pyritohedral symmetry. The snub octahedron is the alternation of the truncated octahedron,

Coxeter's snub operation also allows n-antiprisms to be defined as

is a regular n-hosohedron, a degenerate polyhedron, but a valid tiling on the sphere with digon or lune-shaped faces.

Nonuniform polyhedra with all even-valance vertices can be snubbed, including some infinite sets, for example:

Snub star-polyhedra are constructed by their Schwarz triangle (p q r), with rational ordered mirror-angles, and all mirrors active and alternated.

In general, a regular polychora with Schläfli symbol,

, has a snub with extended Schläfli symbol 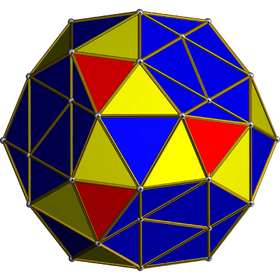 There is only one uniform snub in 4-dimensions, the snub 24-cell. The regular 24-cell has Schläfli symbol,

, and the snub 24-cell is represented by

. It also has an index 6 lower symmetry constructions as

, and an index 3 subsymmetry as

The related snub 24-cell honeycomb can be seen as a

, and lowest symmetry form as

A Euclidean honeycomb is an alternated hexagonal slab honeycomb, s{2,6,3}, and

Another Euclidean (scaliform) honeycomb is an alternated square slab honeycomb, s{2,4,4}, and

The only uniform snub hyperbolic uniform honeycomb is the snub hexagonal tiling honeycomb, as s{3,6,3} and

, which can also be constructed as an alternated hexagonal tiling honeycomb, h{6,3,3},

Another hyperbolic (scaliform) honeycomb is an snub order-4 octahedral honeycomb, s{3,4,4}, and