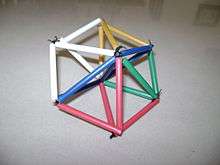 A bipyramid made with straws and elastics. An extra axial straw is added which doesn't exist in the simple polyhedron

The referenced n-gon in the name of the bipyramids is not an external face but an internal one, existing on the primary symmetry plane which connects the two pyramid halves.

A concave bipyramid has a concave interior polygon. 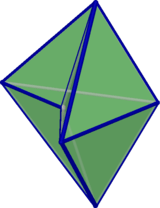 The face-transitive regular bipyramids are the dual polyhedra of the uniform prisms and will generally have isosceles triangle faces.

A bipyramid can be projected on a sphere or globe as n equally spaced lines of longitude going from pole to pole, and bisected by a line around the equator.

The volume of a bipyramid is V =2/3Bh where B is the area of the base and h the height from the base to the apex. This works for any location of the apex, provided that h is measured as the perpendicular distance from the plane which contains the base.

The volume of a bipyramid whose base is a regular n-sided polygon with side length s and whose height is h is therefore:

The digonal faces of a spherical 2n-bipyramid represents the fundamental domains of dihedral symmetry in three dimensions: Dnh, [n,2], (*n22), order 4n. The reflection domains can be shown as alternately colored triangles as mirror images.

A scalenohedron is topologically identical to a 2n-bipyramid, but contains congruent scalene triangles.

The first has 2-fold rotation axes mid-edge around the sides, reflection planes through the vertices, and n-fold rotation symmetry on its axis, representing symmetry Dnd, [2+,2n], (2*n), order 2n. In crystallography, 8-sided and 12-sided scalenohedra exist.[1] All of these forms are isohedra.

The smallest scalenohedron has 8 faces and is topologically identical to the regular octahedron. The second type is a rhombic bipyramid. The first type has 6 vertices can be represented as (0,0,±1), (±1,0,z), (0,±1,−z), where z is a parameter between 0 and 1, creating a regular octahedron at z = 0, and becoming a disphenoid with merged coplanar faces at z = 1. For z > 1, it becomes concave.

isohedral even-sided stars can also be made with zig-zag offplane vertices, in-out isotoxal forms, or both, like this {8/3} form:

The dual of the rectification of each convex regular 4-polytopes is a cell-transitive 4-polytope with bipyramidal cells. In the following, the apex vertex of the bipyramid is A and an equator vertex is E. The distance between adjacent vertices on the equator EE = 1, the apex to equator edge is AE and the distance between the apices is AA. The bipyramid 4-polytope will have VA vertices where the apices of NA bipyramids meet. It will have VE vertices where the type E vertices of NE bipyramids meet. NAE bipyramids meet along each type AE edge. NEE bipyramids meet along each type EE edge. CAE is the cosine of the dihedral angle along an AE edge. CEE is the cosine of the dihedral angle along an EE edge. As cells must fit around an edge, NAA cos−1(CAA) ≤ 2π, NAE cos−1(CAE) ≤ 2π.

* The rectified 16-cell is the regular 24-cell and vertices are all equivalent – octahedra are regular bipyramids.
** Given numerically due to more complex form.

In general, a bipyramid can be seen as an n-polytope constructed with a (n − 1)-polytope in a hyperplane with two points in opposite directions, equal distance perpendicular from the hyperplane. If the (n − 1)-polytope is a regular polytope, it will have identical pyramids facets. An example is the 16-cell, which is an octahedral bipyramid, and more generally an n-orthoplex is an (n − 1)-orthoplex bypyramid.