This article is about the Saudi football team. For other uses, see Al-Ittihad (disambiguation).
"Ittihad Jeddah Club" redirects here. For the basketball team, see Ittihad BC.

The club was founded on the 4th of January 1927 before the third Saudi state was declared, making it the oldest club in Saudi Arabia. The most successful period in Al-Ittihad's history was the 1990s and mid 2000s, when the club won numerous honours both domestically and continental. The team won Cup Winners Cup in 1999 and two Champions League titles in 2004 and 2005 and as far as going on to compete in the 2005 FIFA Club World Cup. The club has the distinction of being the only Asian club to have won the AFC Champions League twice in a row.

Al-Ittihad has a record of home average attendance for Asia clubs in domestic league matches with the average of 42,371 on 2014/2015 season and that is for the club's big popularity which is the first in Saudi Arabia And Asia.

Nowadays Al-Ittihad club is featured in video games like FIFA (12–16) and the PES (14–16) series as one of the best clubs in Asia.

In May 2015, Al-Ittihad entered The Guinness Book Of Records, as the first and only Saudi Arabian/Asian club entering it, because the club had won 232 different local and regional championships in games in Mansour Albalawi's reign as a chairman of the club from 2002 to 2008, and for back-to-back wins of the AFC Champions League in 2004 and 2005, as the only Asian team to accomplish it.

The club was founded after a meeting, on January 4, 1927, of some of the notable football enthusiasts of the city of Jeddah. They met in the offices of the radio broadcasting company and discussed the idea of forming a football club to compete with various traveling teams and be a source of entertainment for inhabitants and an outlet for the city youth to practice organised sport. Everyone agreed that they should go ahead with creating the team that unites them and Ittihad Jeddah was born. The attendees were Hamza Fitaihi, Abdulsamad Najeeb Alsaady, Ismail Zahran, Ali Yamani, Abdulaziz Jameel, Abdulateef Jameel, Abdulateef Linjawi, Othman Banajah, Ahmad Abu Talib, Ali Sultan, Ahmed Almir and Saleh Salamah.

the name of club which contains from this wisdom, Mazen Mohammed words that created the current club name. Club owners agrees with him to put the club name Al-Ittihad (United or Union, jointly) in Arabic.

Ismail Zahran team player who was working as in Radio Office in Jeddah to the possibility of electing the head of the works Mr. Sultan to be a President of the Club, However, Ali Sultan became the first official president of the club. Al-Ittihad did not find at first a strong support, there wasn't an official clubs (communities) such as Al Riyadhi, Because the presence of powerful culture in the city of Jeddah only. the established of Saudi Federation was slowly in the 50s, was established after 29 years from Ittihad foundation year. In their first meeting with Al-Riyadhi, Al-Ittihad make it victory with 3–0 won.

The club has achieved a historic first tournament, which was called the cup of Nishan Nazer, counted as an official tournament, The cup have formed a popularity of Al-Ittihad, Because of a challenge between them in the final. Depending on the narrator, the winner can burn the Embassy wood's. the Championship attended by several of the clubs, communities, fought Al-Ittihad where several games to achieve access to the final. with Al-Mukhtalat. The weather was dust, did not complete the first half, the match was stopped about 10 minutes. the referee stopped the game to rest for 8 minutes, the weather was changed for the better with the second half, Al-Mukhtalat squad had led to fail, it was a low attacking level. The most prominent player in the game is Al-Itithad defender Safwan which was sacrificed for his team. the club won the championship by 3–0 against Al-Mukhtalat. The most important characteristic of this tournament is the first sporting event held in the reign of the founder King Abdul-Aziz Al-Saud.

Al-Ittihad has long-standing rivalry with Al-Hilal. From the start of national competitions the clubs were seen as representatives of two rival cities: Riyadh and Jeddah. After the success of Al-Hilal in Asia and won two Champions League in years 1991 and 1999, on the other side, Al Ittihad has won two titles in two years, they produced arguably the biggest shock in Asian club history when they overturned a 3–1 home defeat by Seongnam Ilhwa Chunma, pulling off a 5–0 away win to secure the Asian crown. Al Ittihad is also known as club of the people such as Barcelona, Liverpool and Boca Juniors. the club has strong support for being the club of the people. While Al-Hilal for its royalty, Al-Hilal has large amount of supporters most in the capital city and the eastern region.

Al-Ittihad also has a rivalry with other Jeddah club, their neighbors Al-Ahli. Al-Ittihad and Al-Ahli have a lot of fans who are the most dangerous fans in Saudi Arabia, which Al-Ittihad's lovers consider Al-Ahli's fans a hated-rivals. The duo played their match at Jeddah, which named "Derby Jeddah" or "The Western Derby". The largest victory was for Al-Ittihad when they defeated Al-Ahli 8–2 in 1966.

Ittihad's success is not limited only to football, but also in basketball, water polo, table tennis, volleyball, and swimming, amongst others. In total, Ittihad has won 8649 trophies. However, football remains the primary sport.

Ittihad is now based in Sahafa street, Mushrefa district, in east Jeddah, where they have a large sports complex. Senior teams play official games at the municipal sports centre, in the south of the city, while youth teams play at the club.

In December 2006, the club offered what was thought to be the most lucrative deal in Arabian football to Portuguese midfielder Luís Figo. It was said that Luís Figo will join the club on July 1, 2007 after his current contract with Internazionale expires. However, not long after, Figo's current club, Internazionale released report that Figo had yet to sign a contract with Al-Ittihad and will not be joining. Figo has since extended his contract at Inter until the end of the 2007–08 season citing that the terms of the agreement were not kept and thus voided the contract.

In January 2010, the club convened an extraordinary club meeting after losing their 4th game of the 2009–10 season 1–2 to Al-Nasr. A decision was made to sack the head coach Gabriel Calderón and replace him with local coach Hassan Khalifa assisted by former striker Hamzah Idris.[2] On January 27, 2010, the club hired Argentinean coach Enzo Trossero to take over the reins of the team. On Dec 15, 2015 Ittihad FC appointed Victor Piturca as their manager for the second time after a string of bad results by the other coach. He lost his first game in AFC this season against Al-Nasr FC 2-1 on March 13, 2016.[3]

Al-Ittihad has built a strong fan-base in Jeddah, across Saudi Arabia and amongst the Arab League and in Asia. The club supporters are renowned for being spirited and for their chants. The wonderful huge stadium opened officially on May 1, 2014 King Abdullah Sports City Stadium is their new home now, there they can express their passion and love, that stadium accommodates above 60,000 (b.s.). Al-Ittihad shares the newly built state of the art King Abdullah Sports City Stadium with local rival Al-Ahli, with their previous home the Prince Abdullah Al Faisal stadium facing massive delays in construction works, having been expected to be fully functional before the new King Abdullah Stadium. 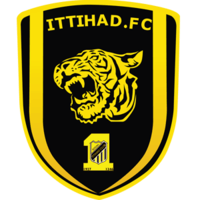 In a press conference on January 9, 2006; president of the club Mansour Albalawi announced that Sela Sport Co (which is the sponsor of Saudi National Team) will pay 350 million riyals to sponsor Al-Ittihad for 5 seasons. Al-Ittihad was later on sponsored by the Saudi Telecom Company, however the team has not renewed STC's contract. This season 2015–16 they have many sponsors (around 10) and the most important one is Etihad Airways.

The club holds 47 championship, officially recognized by FIFA as 33[5]

Rankings are calculated by the AFC.[6]

As of Saudi Premier League:

Current Board of Directors and Administrators