The Kitāb al-Hayawān (كتاب الحيوان, English: Book of Animals) is an Arabic translation in 19 treatises (maqālāt) of the following zoological texts by Aristotle:

While the book is often attributed to Yahyà bin al-Bitrīq, the translator is unknown. However, from certain oddities in the Arabic, it has been deduced that it is a translation of a lost Syriac version. The complete text is available only in MS form (in Tehran), but treatises 11-14 (De Partibus) have been edited as Ajzā’ al-hayawān (The Parts of Animals)[1] and 15-19 (De Generatione) as Fī kawn al-hayawān (On the Being of Animals).[2]

The first known mention of the book appears in a text by the Arab philosopher Al-Kindī (d. 850). Ibn Sīnā (Avicenna) seems to have had direct knowledge of the book, as he paraphrased and commented upon the full text in his encyclopedic Al-Shifā’. In Spain, the 12th-century philosopher Ibn Bājja (Avempace) wrote on De Partibus and De Generatione. It has been remarked that one usually finds references to the Historia in the Eastern Islamicate world, while the other two books are generally referred to in the West, and in conformity to this pattern, Ibn Rushd (Averroes), like Ibn Bājja, wrote commentaries on De Partibus and De Generatione (see below), in which he criticizes Ibn Sīnā’s interpretations. 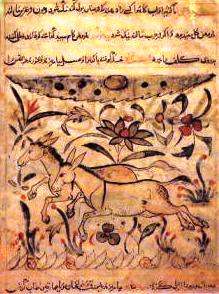 Page from the Kitāb al-Hayawān by Al-Jahiz.

In the Christian West

Finally, Michael Scot’s early 13th-century Latin translation of the Kitāb al-hayawān, De Animalibus, is worthy of mention as the vehicle of transmission into Western Europe. It was alleged by Roger Bacon that Scot "had appropriated to himself the credit of translations which more properly belonged to one Andreas the Jew." This may mean that he had help with the Arabic MS, or that he worked fully or in part from a Judaeo-Arabic or Hebrew version. Scot's De Animalibus is available in a partial edition.[3]