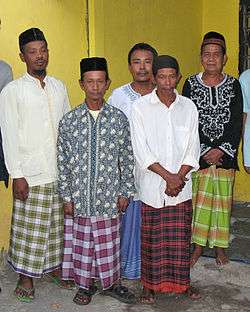 A sarong or sarung (/səˈrɒŋ/; Malay: [ˈsaroŋ], formal Indonesian: [ˈsaruŋ], colloquial Indonesian: [ˈsarʊŋ], Arabic: صارون, Sinhalese: සරම; meaning "sheath" in Indonesian and Malay) is a large tube or length of fabric, often wrapped around the waist and worn mainly by men throughout much of South Asia,[1] Southeast Asia, the Arabian Peninsula, the Horn of Africa, and on many Pacific islands. The fabric most often has woven plaid or checkered patterns, or may be brightly colored by means of batik or ikat dyeing. Many modern sarongs have printed designs, often depicting animals or plants. The Sarong is very similar and as the same as to the Lungi of South India.

Sarung denotes a length of fabric as a garment.

Sarong or "sarung" denotes the lower garment worn by the Indonesian (and other Maritime Southeast Asian) men. This consists of length of fabric about a yard (0.91 m) wide and two-and-a-half yards (2.3 m) long. In the center of this sheet, across the narrower width, a panel of contrasting color or pattern about one foot wide is woven or dyed into the fabric, which is known as the kepala or "head" of the sarong. This sheet is stitched at the narrower edges to form a tube. One steps into this tube, brings the upper edge above the level of the navel (the hem should be level with the ankles), positions the kepala at the center of the back, and folds in the excess fabric from both sides to the front center, where they overlap and secures the sarong by rolling the upper hem down over itself. Malay men wear sarongs woven in a check pattern; women wear sarongs dyed in the batik method, with, for example, flower motifs, and in brighter colors. However, in Javanese culture, the wearing of batik sarung is not restricted to women on formal occasions such as weddings.

The sarong is common wear for women, in formal settings with a kebaya blouse. Malay men wear sarongs in public only when attending Friday prayers at the mosque, but sarongs remain very common casual wear at home for men of all ethnicities and religions in Brunei, Indonesia, Malaysia, Singapore, Sri Lanka, and much of the Indian subcontinent.[2] (In South Asia, sarongs are typically known as mundu or lungi). 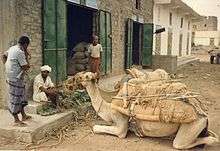 Yemeni man tying his futah (sarong). Sometimes people keep money and other small utensils in the folds of the futah.

Sarongs known under a variety of local names are traditionally worn by the people of Yemen and elsewhere on the Arabian Peninsula. Local names for the garment include fūṭah, izaar, wizār and maʿwaz (pl. maʿāwiz). In Hadhramawt sarong is called ṣārūn in the interior and ṣārūm in the coastal region. In Oman, sarongs are called wizār and are often white in color, similar to the Keralan mundu of South Asia and it is usually worn under the Thawb. In Saudi Arabia, sarongs are known as izaar. Designs can be checkered or striped as well floral or arabesque, but double plaid (i.e., a vertical section of the izār with a different plaid pattern) designs from Indonesia are also very popular. In southwestern Saudi Arabia, tribal groups have their own style of unstitched izaar, which is locally woven. This is also worn in northern Yemen. However, the tribal groups in Yemen each have their own design for their fūṭah, the latter of which may include tassels and fringes. It is thought that these tribal futah resemble the original izaar as worn on the Arabian Peninsula since pre-Islamic times such as the Shendyt. They are generally worn open and unstitched in such a way that the garment does not reach over one's ankles. Other izaars, often imported from Bangladesh, are the traditional clothing of Arab fishermen of the Persian Gulf, the Indian Ocean and the Red Sea. It was the traditional garment for men before the introduction of pant-like pyjamas and kaftans during the Turkish and European colonial periods. Tube-stitched as well as open sarongs are both worn, even in formal dishdasha-wearing countries, as casual sleep wear and at home. 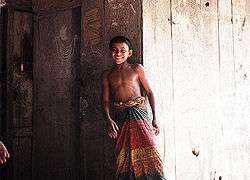 Unlike the brightly coloured Southeast Asian sarongs, the Kerala variety (the mundu) is more often plain white and is worn for ceremonial or religious purposes. In Kerala, the brightly coloured sarongs are called kaily and the white ones are called mundu. The more formal, all-white dhoti is worn for formal and religious occasions. While there are dresses based on the mundu which can be worn by women, they more commonly wear the sari. 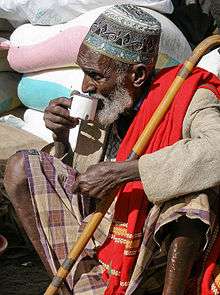 Sarongs are ubiquitous in Somalia and the Muslim-inhabited areas of the Horn of Africa. Although nomadic and urban Somali men have worn them for centuries in the form of a plain white skirt, the colorful macawiis (ma'awiis) sarong, which is the most popular form of the garment in the region, is a relatively recent arrival to Somalia courtesy of trade with the Southeast Asian islands and the Indian subcontinent. Before the 1940s, most macawiis were made of cotton. However, since the industrialization of the market for sarongs, they now come in many fabrics and combinations thereof, including polyester, nylon and silk.

Designs vary greatly and range from checkered square motifs with watermarked diamonds and plaid to simple geometric lines. The one constant is that they tend to be quite colorful; black macawiis are rare. Sarongs in Somalia are worn around the waist and folded several times over to secure their position. They are typically sold pre-sewn as one long circular stretch of cloth, though some vendors offer to sew them as a value-added service.

Group of Bhangra dancers wearing a traditional Kurta and Chaadra.

Sarongs are very common in Sri Lanka and worn only by men. (A similar garment is worn by women. However, the women's garment is called "redda", which is wraparound skirt.) It is the standard garment for most men in rural and even some urban communities. However, most men of upper social classes (whose public attire is trousers) wear the sarong only as a convenient night garment or only within the confines of the house.

Statistically, the number of people wearing sarong as their primary public attire is on the decline in Sri Lanka; the reason being that the sarong carries the stigma of being the attire for less educated lower social classes. However, there is a trend toward adopting sarong as a fashionable garment or as a formal garment worn with national pride, only on special occasions.[3] Political and social leaders of Sri Lanka who want to portray their humility and closeness to "common man" and their nationalism, choose a variation of the sarong nicknamed the "national" as their public attire.

In North and South America as well as Europe, hip wraps are worn as beach wear or as a cover-up over swimwear. The wrap is often made of a thin, light fabric, often rayon, and may feature decorative fringing on both sides. They may have ties, which are long thin straps of fabric which the wearer can tie together to prevent the wrap from falling down. These wraps are mostly worn by women as beach cover ups and do not usually resemble traditional Asian or African sarongs in size, pattern or design. Western men who wear male sarongs are influenced by the Scottish style men skirts known as kilts or lava-lava within the Polynesian or Samoan culture. Typically sarongs are worn by men when they are at home or at the beach or as a cover up on a nude beach or by the pool or on a cruise.[4]

Numerous tying methods exist to hold a sarong to the wearer's body. In some cases, these techniques customarily differ according to the gender of wearer. If a sarong has ties, they may be used to hold it in place. Sarong ties give you a little extra hold and security.[5] If no ties exist, a pin may be used, the fabric may be tightly tucked under itself in layers, the corners of the main sheet may be around the body and knotted, or a belt may be used to hold the sarong in place. 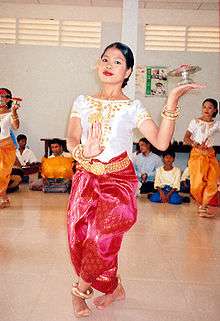 A traditional Khmer dancer wearing a sampot in Cambodia 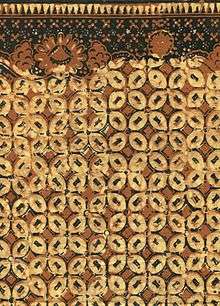 The basic garment known in English most often as a "sarong", sewn or unsewn, has analogs in many regions, where it shows variations in style and is known by different names.

The American public is most familiar with the sarong for the dozens of motion pictures set in the South Seas, most of them romantic dramas made in the 1930s and 1940s. Dorothy Lamour is by far the actress most linked with the garment, which was designed by Edith Head. Lamour starred in multiple films of this genre, starting with The Hurricane in 1937. In fact, Lamour was nicknamed "The Sarong Girl" by the press and even wore a sarong on occasion in more traditional films. Among the other actresses to don the sarong for film roles are Maria Montez, Gilda Gray, Myrna Loy, Gene Tierney, Frances Farmer and Movita. Male stars who wore the manly sarongs on film include Jon Hall, Ray Milland, Tyrone Power, Robert Preston, Sabu Dastagir and Ralph Fiennes in The Constant Gardener. The sarong was also worn by Pierce Brosnan in The Thomas Crown Affair (1999). In documentary movie, we can see soldiers in Sarong directed by Lokendra Arambam.[8] s. In Singapore, the term Sarong Party Girl refers to a local single Singaporean woman especially of Chinese ethnicity who favour socializing and having relationships with expatriate Caucasian men rather than the local ones.