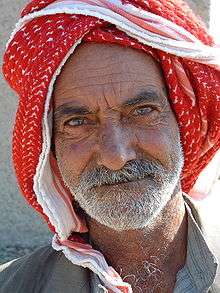 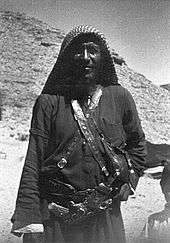 It is commonly found in arid regions as it provides protection from sunburn, dust and sand. Its distinctive standard woven checkered pattern may have originated in an ancient Mesopotamian representation of either fishing nets or ears of grain,[2] but the true origin of the pattern remains unknown.

Toward the end of the 1980s, the keffiyeh became a fashion accessory in the United States and, during the 2000s, it became very popular among adolescents in Tokyo, where it was often worn with camouflage-style clothing.[3] 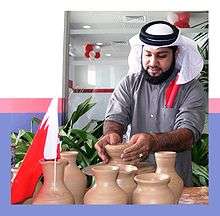 During his sojourn with the Marsh Arabs of Iraq, Gavin Young noted that the local sayyids – "venerated men accepted ... as descendants of the Prophet Muhammad and Ali ibn Abi Talib" – wore dark green keffiyeh (cheffiyeh) in contrast to the black-and-white checkered examples typical of the area's inhabitants.[4]

Many Palestinian keffiyehs are a mix of cotton and wool, which facilitates quick drying and, when desired, keeping the wearer's head warm. The keffiyeh is usually folded in half (into a triangle) and the fold worn across the forehead. Often, the keffiyeh is held in place by a circlet of rope called an agal (Arabic: عقال‎‎, ʿiqāl). Some wearers wrap the keffiyeh into a turban, while others wear it loosely draped around the back and shoulders. A taqiyah is sometimes worn underneath the keffiyeh; in the past, it has also been wrapped around the rim of a fez. The keffiyeh is almost always of white cotton cloth, but many have a checkered pattern in red or black stitched into them. The plain white keffiyeh is most popular in the Arab states of the Persian Gulf – in Kuwait and Bahrain, to the exclusion of almost any other style. The keffiyeh is worn by men of all ages, whether on the head or around the shoulders.

In Jordan, the red-and-white keffiyeh is strongly associated with the country and its heritage, where it is known as the shemagh mhadab. The Jordanian keffiyeh has decorative cotton or wool tassels on the sides; the bigger these tassels, the greater the garment's supposed value and the status of the person wearing it. It has long been worn by Bedouins and villagers and used as a symbol of honor and/or tribal identification. The tasseled red-and-white Jordanian shemagh is much thicker than the untasseled red-and-white shemagh seen in Persian Gulf countries.

In Yemen, the keffiyeh is used extensively in both red-white and black-white pattern and in some traditional Yemeni designs and colours. Before the 1950s, multi-colored tribal shemagh were used widely; nowadays, these are mostly worn only in Yemen and Oman, while the black/white, red/white or pure-white styles have come to dominate in the countries of the Persian Gulf and Levant. The shemagh is part of an ancient Middle Eastern headgear tradition.

In Malaysia, the keffiyeh has been worn by Muslim women as one of hijab fashion and during Palestinian struggle against Israel that has caught the attention of international media, many Malaysians wore it to show solidarity action for Palestine.

The keffiyeh, especially the all-white keffiyeh, is also known as the ghutrah. This is particularly common in the Arabian Peninsula, where the (optional) skullcap is called a keffiyeh. The garment is also known in some areas as the ḥaṭṭah. Roughly speaking: The King of Morocco wearing a الرزة rezza

Rezza
It is worn by inhabitants of North Africa and Egypt. 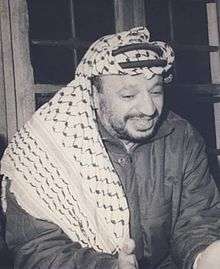 The black-and-white fishnet pattern keffiyeh would later become Arafat's iconic symbol and he would rarely be seen without it; only occasionally would he wear a military cap, or, in colder climates, a Russian-style ushanka hat. Arafat would wear his keffiyeh in a semi-traditional way, wrapped around his head via an agal. He also wore a similarly patterned piece of cloth in the neckline of his military fatigues. Early on, he had made it his personal trademark to drape the scarf over his right shoulder only, arranging it in the rough shape of a triangle, to resemble the outlines of historic Palestine. This way of wearing the keffiyeh became a symbol of Arafat as a person and political leader, and it has not been imitated by other Palestinian leaders.

Another Palestinian figure associated with the keffiyeh is Leila Khaled, a female member of the armed wing of the Popular Front for the Liberation of Palestine. Several photographs of Khaled circulated in the Western newspapers after the hijacking of TWA Flight 840 and the Dawson's Field hijackings. These photos often included Khaled wearing a keffiyeh in the style of a Muslim woman’s hijab, wrapped around the head and shoulders. This was unusual, as the keffiyeh is associated with Arab masculinity, and many believe this to be something of a fashion statement by Khaled, denoting her equality with men in the Palestinian armed struggle.

The color symbolism of the scarves is by no means universally accepted by all Palestinians or Arabs. Its importance should not be overstated, as the scarves are used by Palestinians and Arabs of all political affiliations, as well as by those with no particular political sympathies.

A loom at work making a traditional Palestinian keffiyeh in the Hirbawi factory, Hebron, West Bank.

Today, this symbol of Palestinian identity is now largely imported from China. With the scarf's growing popularity in the 2000s, Chinese manufacturers entered the market, driving Palestinians out of the business.[8] In 2008, Yasser Herbawi, who for five decades had been the only Palestinian manufacturer of keffiyehs, is now struggling with sales. Mother Jones wrote, "Ironically, global support for Palestinian-statehood-as-fashion-accessory has put yet another nail in the coffin of the Occupied Territories' beleaguered economy."[8] 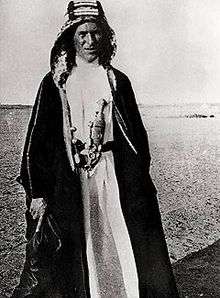 British Colonel T. E. Lawrence (better known as Lawrence of Arabia) was probably the best-known Western wearer of the keffiyeh. He wore a plain white one with agal during his involvement in the Arab Revolt in World War I. This image of Lawrence was later popularized by the film epic about him, Lawrence of Arabia, in which he was played by Peter O'Toole.

The 1920s "silent-film" era of American cinema saw studios take to Orientalist themes of the "exotic" Middle East, possibly due to the view of Arabs as part of the allies of World War I, and keffiyehs became a standard part of the theatrical wardrobe. These films and their male leads typically had Western actors in the role of an Arab, often wearing the keffiyeh with the agal (as with The Sheik and The Son of the Sheik, starring actor Rudolph Valentino).

Erwin Rommel also commonly wore a keffiyeh around his neck during the Western Desert Campaign for practical reasons. 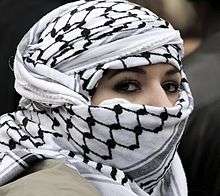 The black and white chequered keffiyeh has become a symbol of Palestinian nationalism, dating back to the 1936–1939 Arab revolt in Palestine. Outside of the Middle East and North Africa, the keffiyeh first gained popularity among activists supporting the Palestinians in the conflict with Israel.

The wearing of the keffiyeh often comes with criticism from various political factions in the ongoing Israeli–Palestinian conflict. The slang "keffiyeh kinderlach" refers to young Jews, particularly college students, who sport a keffiyeh around the neck as a political/fashion statement. This term may have first appeared in print in an article by Bradley Burston in which he writes of "the suburban-exile kaffiyeh kinderlach of Berkeley, more Palestinian by far than the Palestinians" in their criticism of Israel. European activists have also worn the keffiyeh.[9][10]

While Western protesters wear differing styles and shades of keffiyeh, the most prominent is the black-and-white keffiyeh. This is typically worn around the neck like a neckerchief, simply knotted in the front with the fabric allowed to drape over the back. Other popular styles include rectangular-shaped scarves with the basic black-and-white pattern in the body, with the ends knitted in the form of the Palestinian flag. Since the Al-Aqsa Intifada, these rectangular scarves have increasingly appeared with a combination of the Palestinian flag and Al-Aqsa Mosque printed on the ends of the fabric. 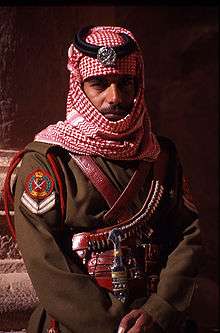 For decades, keffiyeh have been issued to British soldiers who now almost exclusively refer to them as shemaghs (from Arabic شماغ šmāġ). Their use by some units and formations of the military and police forces of the former British Empire and subsequent Commonwealth dates back to before the Second World War. Because of its utility it was adopted by the Palestine Police Force, the Transjordan Frontier Force, the Sudan Defence Force, the Arab Legion, the Jordanian Armed Forces, the Libyan Arab Force, the Long Range Desert Group, the Special Air Service and Popski's Private Army, among others, who wore them while operating in North Africa. After the war, their use by the Army continued with the shemagh being worn in both desert and temperate environments in theatres such as Dhofar. Australian Army forces have also used the shemagh since the Vietnam War, and extensively during Iraq and Afghanistan, particularly by Australian Special Forces units. Since the beginning of the War on Terror, these keffiyeh, usually cotton and in military olive drab or khaki with black stitching, have been adopted by US troops as well, a reversal of previous policy which saw them strictly forbidden during the Gulf War.[11] Their practicality in an arid environment, as in Iraq, explains their enduring popularity with soldiers. Soldiers often wear the keffiyeh folded in half into a triangle and wrapped around the face, with the halfway point being placed over the mouth and nose, sometimes coupled with goggles, to keep sand out of the face. This is also commonly done by armoured, mechanised and other vehicle-borne troops who use it as a scarf in temperate climates to ward off wind chill caused by being in moving vehicles. British soldiers deploying to Iraq or Afghanistan are now issued with a tan-colored shemagh. Irish Army Rangers use a green shemagh to conceal their identity while in the "green" role. 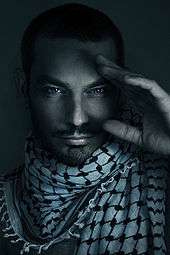 A model wearing a shemagh style keffiyeh around his neck

As with other articles of clothing worn in wartime, such as the T-shirt, fatigues and khaki pants, the keffiyeh has been seen as chic among non-Arabs in the West. Keffiyehs became popular in the United States in the late 1980s, at the start of the First Intifada, when bohemian girls and Jewish punks wore keffiyehs as scarves around their necks.[3][5] In the early 2000s, keffiyehs were very popular among youths in Tokyo, who often wore them with camouflage clothing.[3] The trend recurred in the mid-2000s in the United States,[3][5] Europe,[5] Canada and Australia,[12][13] when the keffiyeh became popular as a fashion accessory, usually worn as a scarf around the neck in hipster circles.[3][5] Stores such as Urban Outfitters and TopShop stocked the item (after some controversy over the retailer's decision to label the item "anti-war scarves," however, Urban Outfitters pulled the item).[5] In spring 2008, keffiyehs in colors like purple and mauve were given away in issues of fashion magazines in Spain and France. In UAE, males are inclining towards more western headgear while the women are developing preferences for dupatta—the traditional head cover of the Indian subcontinent.[14]