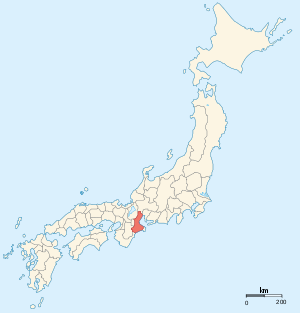 Ise Province (伊勢国, Ise no kuni) was a province of Japan in the area of Japan that is today includes most of modern Mie Prefecture.[1] Ise bordered on Iga, Kii, Mino, Ōmi, Owari, Shima, and Yamato Provinces. Its abbreviated form name was Seishū (勢州).

The name of Ise appears in the earliest written records of Japan, and was the site of numerous religious and folklore events connected with the Shinto religion and Yamato court. Ise province was one of the original provinces of Japan established in the Nara period under the Taihō Code, when the former princely state of Ise was divided into Ise, Iga and Shima. The original capital of the province was located in what is now the city of Suzuka, and was excavated by archaeologists in 1957. The site was proclaimed a national historic landmark in 1986. The remains of the Ise kokubunji have also been found within the boundaries of modern Suzuka. Under the Engishiki classification system, Ise was ranked as a "great country" (大国) and a “close country” (近国).

Two Shinto shrines in Ise Province compete for the title of Ichinomiya: Tsubaki Grand Shrine and the Tsubaki Jinja, both of which are located in Suzuka. The Ise Grand Shrine, located in what is now the city of Ise was the destination of pilgrims from the Heian period through modern times.

During the Muromachi period, Ise was ruled nominally by the Kitabatake clan. After the establishment of the Tokugawa Shogunate, Ise was divided into several feudal han, the largest of which was Tsu Domain. During the Edo period, the Tōkaidō road from Edo to Kyoto passed through northern Ise, with post stations at several locations.

At the time of the Bakumatsu period, the feudal domains within Ise Province included the following:

After the start of the Meiji period, with the abolition of the han system in 1871, Ise was joined with former Iga and Shima provinces to form the new Mie Prefecture formally created on April 18, 1876.