Not to be confused with the now-demolished, elevated BMT Lexington Avenue Line in Brooklyn.

The Lexington Avenue Line (also known as the East Side Line) is one of the lines of the IRT division of the New York City Subway, stretching from Downtown Brooklyn or Lower Manhattan north to 125th Street in East Harlem.[2] The portion in Lower and Midtown Manhattan was part of the city's first subway line. The line is served by the 4 5 6 <6> trains.

The line is also known as the IRT East Side Line. For a long time, it was the only line in Manhattan to directly serve the Upper East Side and East Midtown; this four-track line is the most used rapid transit line in the United States. Its average of 1.3 million daily riders is "more than the combined ridership of San Francisco, Chicago, and Boston’s entire transit systems." Its ridership also exceeds that of the 798,456 daily trips on the entire Washington Metro,[3] and in part spurred the construction of the Second Avenue Subway starting in 2007.[4]

Four stations along this line have been abandoned. When platforms were lengthened to fit ten cars, it was deemed most beneficial to close these stations and open new entrances for adjacent stations. The 18th Street station was abandoned because of the proximity to both 14th Street–Union Square and 23rd Street.[5] In addition, the City Hall and Worth Street stations were both very close to the Brooklyn Bridge–City Hall station's Brooklyn Bridge and Duane Street exits, respectively, so both were abandoned.[6][7] Finally, South Ferry is within walking distance of Bowling Green, and is right next to the corresponding station on the IRT Broadway–Seventh Avenue Line.

The Lexington Avenue Line begins in lower Manhattan at the inner loop of the abandoned South Ferry station. North of the station is a merge with the tracks of the Joralemon Street Tunnel from Brooklyn, which become the express tracks. These run north under Broadway and Park Row to Centre Street. At the south end of Centre Street, directly under New York City Hall, is the City Hall Loop and its abandoned station, which was the southern terminus of the original IRT subway line. The loop is still used to turn 6 and <6> service; the Lexington Avenue local tracks, which feed the loop, rise up to join the express tracks just south of Brooklyn Bridge–City Hall station.

From Brooklyn Bridge, the line continues northward in a four-across track layout under Centre Street, Lafayette Street, Fourth Avenue, and Park Avenue South until 42nd Street. At this point, the beginning of Metro-North Railroad's Park Avenue tunnel in Grand Central Terminal forces the Lexington Avenue Line to shift slightly eastward to Lexington Avenue; its Grand Central–42nd Street station is located on the diagonal between Park and Lexington. Just south of Grand Central, a single non-revenue track connects the IRT 42nd Street Shuttle to the southbound local track; this was part of the original IRT subway alignment.

Under Lexington Avenue, the line assumes a two-over-two track configuration, with the local tracks running on the upper level and the express on the lower, although it briefly returns to a four-across layout between 96th Street and 116th Street. 125th Street returns to this two-over-two layout, although here the upper level is used by all northbound trains and the lower level by southbound trains. 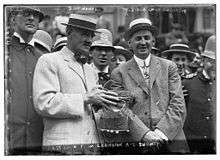 The first revenue train on the South Ferry extension left South Ferry at 11:59 p.m. on July 9, 1905; the extension of the IRT White Plains Road Line to West Farms opened just after.[17]

The original plan for what became the extension north of 42nd Street was to continue it south through Irving Place and into what is now the BMT Broadway Line at Ninth Street and Broadway. Contracts awarded on July 21, 1911 included Section 6 between 26th Street and 40th Street; at the time, the IRT had withdrawn from the talks, and the Brooklyn Rapid Transit Company (BRT) was to operate on Lexington Avenue. The IRT submitted an offer for what became its portion of the Dual Contracts on February 27, 1912,[19] and construction was soon halted on Section 6.[20]

The rest of the line, north to 125th Street, opened on July 17, 1918.[21] However, until the evening of August 1, 1918, it ran as a shuttle on the local tracks only, terminating at 42nd Street and at 167th Street on the IRT Jerome Avenue Line (where the connection from the elevated IRT Ninth Avenue Line merged). On August 1, service patterns were changed, and the Lexington Avenue Line became a through route. The IRT Broadway–Seventh Avenue Line also switched from shuttle operation at that time, and the IRT 42nd Street Shuttle was formed along the old connection between the sides. Due to the shape of the system, it was referred to as the "H system". The first section of the IRT Pelham Line also opened to Third Avenue–138th Street on August 1, 1918.[22] 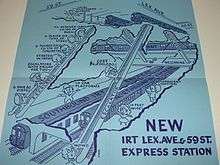 Brochure for the opening of the 59th Street express platforms

On August 28, 1991, an accident with a 4 train on the express track just north of the 14th Street–Union Square station killed five riders and injured 215 others in the worst accident on the system since the 1928 Times Square derailment. As a result of the crash, new safety protocols were put in place and there was a partial implementation of automation of the New York City Subway.

The train that was hijacked in the book The Taking of Pelham One Two Three by Morton Freedgood (writing as John Godey) and the three films based on the novel originated on the IRT Pelham Line from Pelham Bay Park at 1:23 P.M., hence the name "Pelham 123," and traveled on this (the Lexington Avenue) line.

Template:Attached KML/IRT Lexington Avenue Line
KML is from Wikidata
This article is issued from Wikipedia - version of the 11/17/2016. The text is available under the Creative Commons Attribution/Share Alike but additional terms may apply for the media files.