List of languages by number of native speakers in India 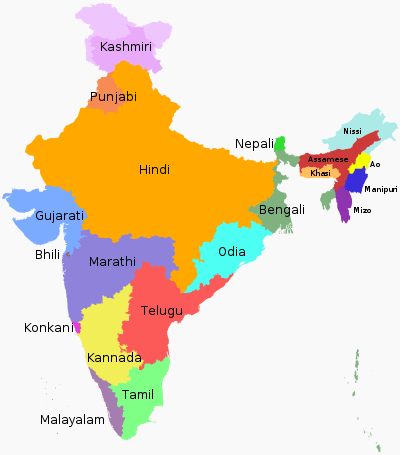 States and union territories of India by the most commonly spoken first language.[1][lower-alpha 1]

India is home to several hundred languages. Most Indians speak a language belonging to the families of the Indo-Aryan branch of Indo-European (ca. 74%), the Dravidian (ca. 24%), the Austroasiatic (Munda) (ca. 1.2%), or the Sino-Tibetan (ca. 0.6%), with some languages of the Himalayas still unclassified. The SIL Ethnologue lists 415 living languages for India.

Hindi is the most widely spoken language in northern parts of India. The Indian census takes the widest possible definition of "Hindi" as a broad variety of "Hindi languages". According to 2001 Census even though 45% of Indian population know Hindi, only 25% of them have declared Hindi as their native language or mother tongue.[2] Indian English is recorded as the native language of 226,449 Indians in the 2001 census.[3]

Indian population in 1991 exhibited 19.4% of bilingualism and 7.2% of trilingualism, so that the total percentage of "native languages" is at about 127%.

India has a Greenberg's diversity index of 0.914, i.e. two people selected at random from the country will have different native languages in 91.4% of cases.[5]

Further information: List of languages by number of native speakers

Ordered by number of speakers as first language.

More than one million speakers