Not to be confused with Koraku language. 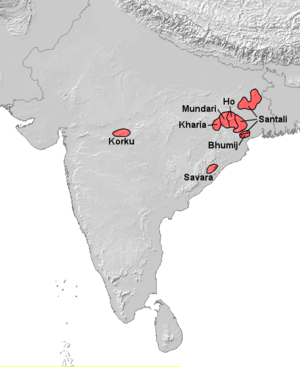 Distribution of the Munda languages in India, with Korku the leftmost in central India

The Korku language is the language of the Korku tribe of central India. It belongs to the Kolarian or Munda family, isolated in the midst of a Dravidian (Gondi) population.

Korkus are also closely associated with the Nihali people, many of whom have traditionally lived in special quarters of Korku villages.[4] Korku is spoken by half a million people, mainly in four districts of southern Madhya Pradesh (Khandwa, Harda, Betul, Hoshangabad) and three districts of northern Maharashtra (Rajura and Korpana tahsils of Chandrapur district, Manikgarh pahad area near Gadchandur in Chandrapur district) (Amravati, Buldana, Akola). Korku is spoken in a declining number of villages and is gradually being replaced by Hindi.

Nouns may have either one of the three genders: masculine, feminine, or neuter. Adjectives are placed before the nouns they qualify.

The Korku language uses the Balbodh style of the Devanagari script, which is also used to write the Marathi language.[2]

The use of the Korku language has been heavily influenced by larger hegemonic languages, especially Hindi. That influence affects not just language but also the customs and culture of traditional Korku people. A few groups have been more successful in preserving their language, specifically the Potharia Korku (from the Vindhya Mountains).[6]

The national census of 2001 reported 574,481 people claiming to speak Korku, an un-scheduled language.[7]