The men's major golf championships, also known simply as the majors, are the four most prestigious events in professional golf.[1] The competitions are the Masters Tournament, the U.S. Open, The Open Championship and the PGA Championship, contested annually in that order. Should the same golfer win all four majors in one year, this would be recognized as a grand slam; no one has completed this feat, although Tiger Woods has held all four majors at once, a feat dubbed the Tiger Slam.[2] 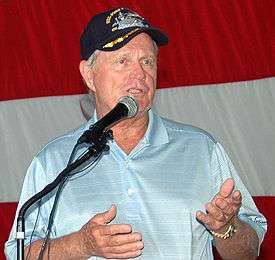 Jack Nicklaus has won 18 men's major golf championships, more than any other man.

Jack Nicklaus has won the most majors; he won 18 during his career.[3] Second on the list is Tiger Woods, who has won 14 majors to date; his most recent major victory was at the 2008 U.S. Open.[4] Walter Hagen is third with 11 majors;[5] he and Nicklaus have both won the most PGA Championships with five.[6] Nicklaus also holds the record for the most victories in the Masters, winning the competition six times.[7] Nicklaus also shares the record for the most U.S. Open victories with Willie Anderson, Bobby Jones and Ben Hogan, each winning this competition four times.[8] Harry Vardon holds the record for the most Open Championship victories, winning six times during his career.[9] Nicklaus, Woods, Hogan, Gary Player and Gene Sarazen are the only golfers to have won all four of the majors during their career.[10]

Although the U.S. Amateur and The Amateur Championship were once considered to be majors,[11] they are no longer recognized as such, and victories in these competitions are not included in the list.

To date, a total of 216 different men have won majors. Of these, 81 have won at least two.