i//) is a Nagar Panchayat under Sub Division Mhow in Indore district in the Indian state of Madhya Pradesh.Total geographical area of Mhowgaon nagar panchayat is 13 km2 and it is the smallest city by area in the sub district. Population density of the city is 2309 persons per km2. Mhowgaon is divided into 15 wards for which elections are held every 5 years, among them Mhowgaon Ward No 02 is the most populous ward with population of 3440 and Mhowgaon Ward No 15 is the least populous ward with population of 957. Mhowgaon Nagar Panchayat has total administration over 6,373 houses to which it supplies basic amenities like water and sewerage. It is also authorized to build roads within Nagar Panchayat limits and impose taxes on properties coming under its jurisdiction.[3] 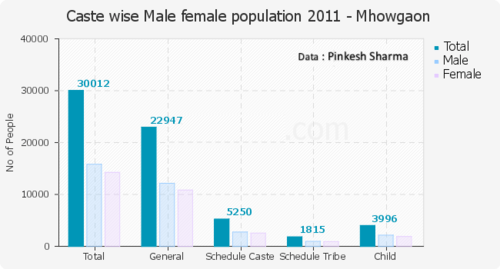 Hinduism is the major religion in Mhowgaon with 93.59% in which schedule Caste (SC) constitutes 17.49% while Schedule Tribe (ST) were 6.05% of total population in Mhowgaon (NP). 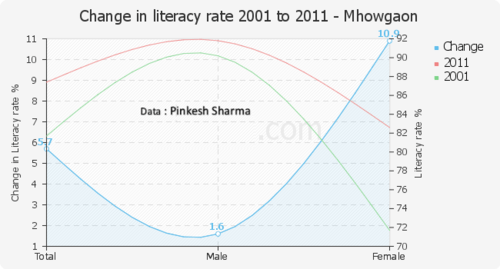 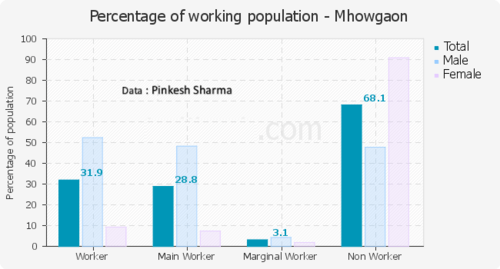 Summers start in mid-March and can be extremely hot in April and May. The daytime temperatures can touch 48 °C (118 °F) on more than one occasion. Average summer temperatures may go as high as 40 °C (104 °F) but humidity is very low.

Rains are due to southwest monsoons. The typical monsoon season goes from 15 June till mid-September, contributing 32–35 inches of annual rains. 95% of rains occur during monsoon season.

Mhowgaon gets moderate rainfall of 185 to 360 millimetres (7.3 to 14.2 in) during July–September due to the southwest monsoon.

This page is updated by Pinkesh Sharma