This article is about the municipality in Madhya Pradesh, India. For its namesake district, see Jhabua District.

Jhabua State in the Imperial Gazetteer of India

Jhabua (Hindi: झाबुआ) is a town and a municipality in Jhabua district in the Indian state of Madhya Pradesh. It is the administrative headquarters of Jhabua District.

Jhabua was the capital of a princely state of the British Raj's Central India, in the Bhopawar agency. Its area, with the dependency of Rutanmal, was approx 1,776 square miles (4,600 km2). The Rajas of Jhabua belonged to the Rathor dynasty. [1]

The ancestor of the family was Rao Bar Singh a.k.a. the Birji, fifth son of Rao Jodh of Marwar. His descendant, Kunwar Kesho Das or Kishan Das, founded Jhabua in 1584.

Raja Kesho Das was first Raja of Jhabua 1584/1607. He was granted the title of Raja by the Emperor of Delhi, as a reward for a successful campaign in Bengal, and for punishing the Bhil chiefs of Jhabua who had murdered an Imperial Viceroy of Gujarat. The names of the rulers are:[2]

After India's independence in 1947, its rulers acceded to India, and Jhabua became a part of the newly created Madhya Bharat state, which in 1956 was merged into Madhya Pradesh.

Jhabua has an average elevation of 318 metres (1043 feet).[3] Jhabua is located at the bottom right side of MP,mainly towards Gujarat.

Jhabua city is famous for its black cotton soil commonly known as "White Gold". There are many interesting places in Jhabua Thasil. 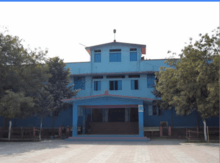 This is the building of The new catholic mission school,Jhabua

The Jhabua has developed with awareness about cleanliness and education.It has given employment to people residing in nearby villages.The image of jhabua has changed,it is now no more tribal at all, however the main people of jhabua 'Adivasi' are also studying in good schools to gain knowledge.