For other uses, see Bagh (disambiguation).

Bagh (Hindi: बाग) is a census town in Dhar district in the state of Madhya Pradesh, India. It is known for the Bagh Caves, which are late 4th- to 6th-century Buddhist rock-cut chambers with murals. The name of the town stems from the caves - according to local legend there were living tigers (bagh in several languages of India) in these abandoned Buddhist caves.[1]

The town is also known for a type of block prints on fabric, known as Bagh prints.

The next known ruler of the region is Maharaja Subandhu of Mahishmati. His Bagh Caves inscription is dated 167 (486 CE, assuming Gupta era).[3][4] Historian Walter M. Spink has identified Subandhu as the prince Vishruta mentioned in Dashakumaracharita. According to his theory, Subandhu or Vishruta was a Gupta prince, who established the dynasty that later came to be known as Kalachuri.[5][6] 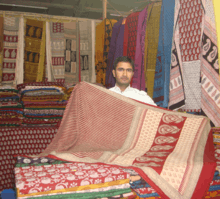