He was born in New York City, to Italian American immigrant parents, Anthony and Assunta DiSalle. His family moved to Toledo, Ohio, when he was three years old. He graduated with a bachelor's degree from Georgetown University and married the former Myrtle E. England. The couple had four daughters and one son.[1]

He ran (unsuccessfully) for the Democratic nomination for the United States Senate in 1950.[2] In December 1950, President Harry S. Truman named DiSalle director of the Office of Price Stabilization, a Korean War-era agency which established and enforced wartime price controls. He resigned on January 23, 1952, to run for the Senate again, and lost in the general election to incumbent Republican Senator John W. Bricker.[3]

DiSalle was the Democratic nominee for Governor of Ohio in 1956, but was defeated. In 1958 DiSalle had a rematch against his opponent, C. William O'Neill. This time DiSalle won. The length of the Governor's term had been increased to four years and DiSalle served from 1959 to 1963. In July 1959 DiSalle signed the bill making "With God, all things are possible" the official motto of the State of Ohio. The motto is derived from the Gospel of Matthew 19:26.

DiSalle was Ohio's favorite son candidate for the Democratic nomination for the presidency in 1960. He ran only in his home state, which he won by a comfortable margin of 60.25% against his opponent, Albert S. Porter.[4] This secured him sixth place in total popular vote in the primaries (behind John F. Kennedy, Pat Brown, George H. McLain, Hubert Humphrey and George Smathers).[5] 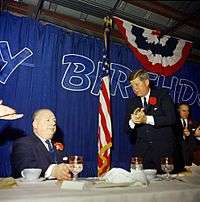 He lost reelection as governor in 1962 after voters disapproved of his support for an end to capital punishment, a tax hike, and a state policy that billed wards of the state for living necessities.[2]

DiSalle was a death penalty opponent and commuted a number of sentences,[6] despite allowing six executions as governor.[7] DiSalle personally investigated all cases of people scheduled to be electrocuted and even personally met with some of them.[8] "To demonstrate his faith in rehabilitation, [DiSalle] made it a point to hire convicted murderers to serve on his household staff."[9]

One of DiSalle's primary concerns regarding the death penalty was that poorer defendants did not have the same access to counsel as rich defendants, and therefore would suffer the death penalty disproportionately. He recalled: I found that the men in death row had one thing in common: they were penniless.[10]

After leaving Governorship DiSalle co-founded and served as a chairman of the National Committee to Abolish Federal Death Penalty.[10][11] His 1965 book, The Power of Life or Death, discusses this issue and chronicles his difficult experiences as the man charged with making the final decision regarding a sentence commutation.[12] He is quoted in the book Mercy on Trial: What It Means to Stop an Execution as saying, "No one who has never watched the hands of a clock marking the last minutes of a condemned man's existence, knowing that he alone has the temporary Godlike power to stop the clock, can realize the agony of deciding an appeal for executive clemency."[13]

In 1966, he joined the Washington, D.C., law firm of Chapman, Duff & Paul.[1] The same year, DiSalle also authored the book Second Choice, a history of the U.S. vice presidency.[14] In 1979, he co-founded the law firm of DiSalle & Staudinger in Washington, D.C.

DiSalle led a draft movement for Massachusetts Senator Edward M. Kennedy in 1968, and served as the honorary chairman of Kennedy's 1980 presidential bid.[1][2]

DiSalle died in 1981 of a heart attack while vacationing in Pescara, Italy.[15] He is buried at Calvary Cemetery in Toledo. [16]

Disalle has two current structures in Ohio named for him:

Also, the DiSalle Center (no longer standing) at the Ohio Expo Center and State Fair in Columbus, Ohio, was named in honor of DiSalle.