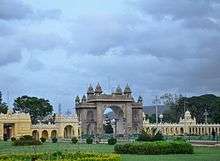 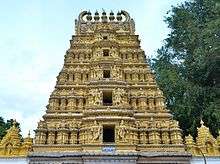 Light up of Mysore Palace

The Palace of Mysore is a historical palace in the city of Mysore in Karnataka, southern India. It is the official residence and seat of the Wodeyars — the rulers of Mysore, the royal family of Mysore, who ruled the princely state from 1399 to 1950. The palace houses two durbar halls (ceremonial meeting halls of the royal court) and incorporates a mesmerizing and gigantic array of courtyards, gardens, and buildings. The palace is in the central region of inner Mysore, facing the Chamundi Hills eastward.

Mysore is commonly described as the City of Palaces. There are about seven palaces inclusive of this; however, Mysore Palace refers specifically to the one within the Old Fort. Built by the Maharaja Rajarshi His Highness Krishnarajendra Wadiyar IV, Mysore Palace is now one of the most famous tourist attractions in India, after the Taj Mahal, and has more than 6 million visitors annually.[1]

Krishnaraja Wadiyar III was Maharaja from 1799 to 1831. After the death of Tipu Sultan he made Mysore his capital in May 1799 and focused on education, religious sites and donating jewels to temples including Melkote. Chamaraja Wodeyar IX was crowned on March 25, 1881. He was anointed king on the date fixed by the Governor-General. He is credited with founding India's first democratic institutions -"Prajapratinidhi Sabhe" with the Mysore representative assembly in 1881. Nalwadi Krishnaraja Wodeyar IV was Maharaja from 1902 to 1940 He was also called the Saint King-"Rajarshi" by Mahatma Gandhi. Assisted by dewans Sir M. Visvesvaraya and Sir Mirza Ismail, he changed Mysore by adding Asia's first hydro electric project at Shivanasamudra, the KRS dam and the University of Mysore in 1916. Jayachamaraja Wodeyar was the twenty fifth and the last king, reigning from 1940 to 1950, when he agreed to merge the state with the union of India. A musicologist and a philanthropist, he was named Raj Parmukh of Mysore from Jan 26, 1950, a post he held for six years. The present Maharaja is Yaduveer Wadiyar, who was adopted by his aunt.

King Yaduraya first built a palace inside the Old Fort in Mysore in the 14th century,which was demolished and constructed multiple times. The regent of Mysore, Her Majesty Maharani Vani Vilas Sannidhna, and her son, the Maharaja of Mysore His Highness Rajarshi Krishnaraja Wodeyar IV, commissioned the British architect Lord Henry Irwin to build a new palace to replace the old one which had been turned into ashes by fire.[2] Meanwhile, the royal family stayed in the nearby Jaganmohan Palace.The construction in charge was taken by B. P. Raghavulu Naidu who was Executive engineer in the mysore palace division. He made elaborate studies on architecture that had to be applied for the new palace by visiting delhi, madras and calcutta and made plans for the new palace.It costed Rs. 41,47,913 for the construction and was complete in 1912. This is the magnificiant and a masterpiece palace which is standing in front of us and visited by hundreds of people from all over the world daily. [3]

Construction of the current palace was commissioned in 1897, completed in 1912,[4] and expanded around 1940 (including the addition of the present Public Durbar Hall wing) during the reign of His Highness Maharaja Jayachamarajendra Wadiyar, the last Maharaja of Mysore Kingdom. The construction was completed in 1912, but the fort continued to be beautified and its inhabitants were slowly moved to the newer extension built off the palace. 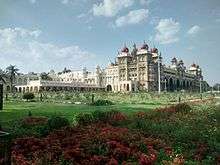 Apart from the leonine Mysore Palace and Jaganmohan Palace (which, later, His Highness Maharaja Jayachamarajendra Wadiyar used as his art gallery and it remains an art gallery), the city has several other grand palaces like Jayalakshmi Vilas Mansion (now a folk art museum), Rajendra Vilas Mansion (now a private hotel atop Chamundi Hills), Lalitha Mahal Palace (now a five-star hotel), Laxmi Vilas Mansion, Cheluvamba Vilas Palace (the palace which His Highness Maharaja Sri Jayachamarajendra Wadiyar donated to the newly born Govt. of India; now the headquarters of Central Food Technological Research Institute, a national research institute), and Krishnarajendra Vilas Palace (now Krishna Rajendra Hospital). Besides there are buildings a century old or more, like Crowfard Hall (now the headquarters of the University of Mysore), Oriental Research Institute building, Corporation Complex of Mysore City Corporation, et cetera. In all the above palaces, the royal family holds blocks held by the kings traditionally. However, the Bangalore Palace and Mysore Palace are entirely under the possession of the royal family. Bangalore Palace remains entirely a private property of the princess. 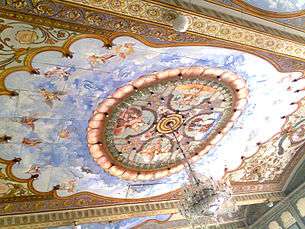 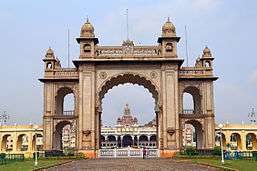 The architectural style of domes of the palace is commonly described as Indo-Saracenic and blends Hindu, Muslim, Rajput, and Gothic styles. It is a three-story stone structure with marble domes and a 145 ft five-story tower. The palace is surrounded by a large garden. The entrance gate and arch hold the emblem and coat of arms of the kingdom of Mysore, around which is written the kingdom's motto in Sanskrit: "न बिभॆति कदाचन" (never be terrified). 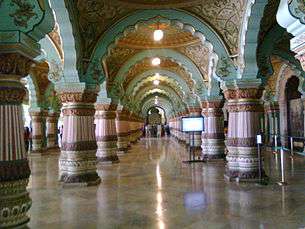 This beautiful building is 245 Ft in length and 156 Ft in width. There are fire extinguishing machines located in all parts of the palace in order to prevent any fires. [5]

The three-story stone building of fine gray granite with deep pink marble domes has a facade with several expensive arches and two smaller ones flanking the central arch, which is supported by tall pillars. Above the central arch is a sculpture of Gajalakshmi, the goddess of wealth, prosperity, good luck and abundance with her elephants. There are three major exclusive temple buildings within the Old Fort, and about 18 inside the palace heart building. The Maharajas of Mysore were devotees of Goddess Chamundi, which is why the place faces Chamundi Hills. Besides, head of the Parakala Mutt stays the spiritual rajguru (royal teacher and guide) as a reason of which the palace is built next to an even older Parakala Mutt headquarters.

Mysore palace in the evening

Every autumn, the palace is the venue for the famous Mysore Dasara festival, during which leading artists perform on a stage set up in the palace grounds. On the tenth day of the festival Vijaya Dashami, a parade with caparisoned elephants and floats originate from the palace grounds.

Dasara is the most extravagant festival of Mysore. It is celebrated in September and October of each year. The festival celebrates and commemorates the victory of the great Goddess Durga, also called Chamundeshwari, after she slew the demon Mahishasura, thereby symbolizing the triumph of good over evil according to Hindu mythology.

This festival has been celebrated by the Wodeyars at Srirangapatna since 1610, and in Mysore with great pomp since 1799. The tradition is still carried on, although the scale of the celebrations has diminished. The Dashera festivities have become an integral part of the culture and life in Mysore. To celebrate this festival, the Palace of Mysore is illuminated with more than 96,000 lights during the two-month period.

The palace is an excellent combination of Indo-Saracenic architecture and features a number of unique rooms.

A concert held inside the palace.

This room was used by the king as a hall for private audiences. Entry to this opulent hall is through an elegantly carved rosewood doorway inlaid with ivory that opens into a shrine dedicated to Ganesha. The central nave of the hall has ornately gilded columns, stained glass ceilings, decorative steel grills, and chandeliers with fine floral motifs, mirrored in the pietra dura mosaic floor embellished with semi-precious stones. This is where the king would confer with his ministers. It was the chamber in which he gave audience to people deserving special attention.

Entry to the palace is through the Gombe Thotti, or Doll’s Pavilion, a gallery of traditional dolls from the nineteenth and early twentieth centuries. The pavilion also houses a fine collection of Indian and European sculpture and ceremonial objects, including a wooden elephant howdah (frame to carry passengers) decorated with 84 kilograms of gold. 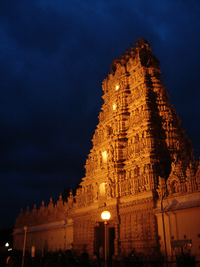 The Kalyana Mantapa, or marriage hall, is a grand, octagonal-shaped pavilion with a multi-hued stained glass ceiling with peacock motifs arranged in geometrical patterns. The entire structure was wrought in Glasgow, Scotland.

The floor also displays a peacock mosaic, designed with tiles from England. Oil paintings illustrating the royal procession and Dasara celebrations of bygone years are displayed on the walls.

The palace houses several rooms of importance. These include:

The palace complex includes twelve Hindu temples. The oldest was built in the 14th century, while the most recent was built in 1953.

Some of the famous temples are:

The scenes of every detail in and around the palace attract one's attention. However, the authorities have prohibited photography inside the main palace complex.

The Old Fort of the palace stands open from morning 10 to night 8 and is free of cost. Entry to the palace buildings is between 11 in the morning and 3 in the afternoon, under tight security. Two squads, one police and one paramilitary, stand guard during the day, and two more during night. Children below seven are free to enter the palace, while those between seven and twelve are charged rupees 25 per head. For adults, tickets are available for Rs. 40. Price of admission for foreign tourists is INR 200. Footwear is removed before entering the palace complexes.

A major issue for visitors is the frequent extortion of bribes from visitors and tourists from corrupt Police and Palace Guards. Several scams have been reported which include guards who "befriend" visitors while offering to take them to a "secret room" where they extort money from tourists. Guards frequently requests bribes for taking photos, or try and intimidate visitors into providing money or foreign currency. Visitors have reported other scams perpetrated by corrupt officials which include demands to produce tickets and further requesting bribes.[6]

Currently, a major portion of the palace is under the control of the Government of Karnataka, acquired by passing the Mysore Palace Acquisition Act. Only a small portion of the palace, towards the West Gate, is under the possession of Princess Pramodadevi Wadiyar. In fact, the High Court of Karnataka had passed judgment in favor of the late prince H.H. Srikantadatta Narasimharaja Wadiyar that the palace belongs to the royal family. However, the Government of Karnataka appealed the case to the Supreme Court after its defeat in the High Court. The case is still pending, however the prince, who died on the 10th of December, 2013, did not survive to continue fighting against the government.